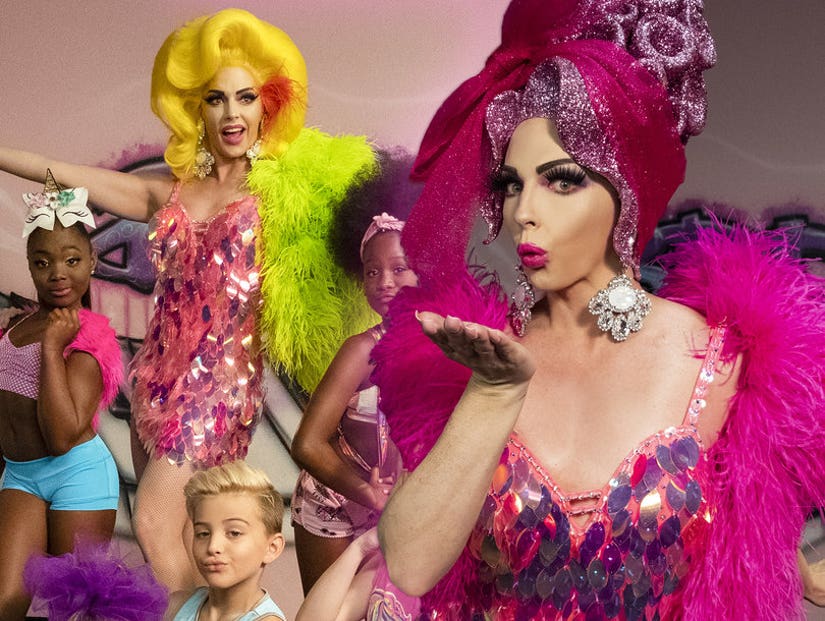 The "Drag Race" superstar opens up about finding her "missing puzzle piece" and gives Halloween tips, too.

It's a good time to be a drag queen.

"RuPaul's Drag Race" picked up an Emmy earlier this year, show alums Shangela and Willam made scene-stealing appearances in "A Star Is Born," Twitter's dream-casting the role of Ursula in Disney's live-action "Little Mermaid" with other former queens and one of them, the one and only Alyssa Edwards, landed her own Netflix show.

Edwards first competed on the fifth season of Ru's reality series, before returning for "All Stars" in 2016. She was easily a fan favorite both times around, thanks to her larger than life hair and personality to match, even finding a fan in "SNL" star Leslie Jones.

The Netflix series "Dancing Queen" follows Alyssa and her alter-ego Justin Dwayne Lee Johnson's life in Mesquite, Texas, where Johnson runs a dance studio. With "Dancing Queen" out now, TooFab caught up with Alyssa to chat about her love life after that particularly cringeworthy date on Season One, her social media friendship with Jones and how "proud" she felt seeing Shangela on the big screen with Lady Gaga and Bradley Cooper.

We love your interactions with Leslie Jones on social media. What was your initial reaction when you learned she was such a big fan and do you guys talk offline at all?

Well I was so shocked, I was like, oh my gosh, she's really kiki-ing with me, she's getting a daily giggle off me and I messaged her back and she was like, "Alyssa I love you" and then when she was on the Emmys and they asked her, "What is one celebrity you'd like to meet?" and she was like "Alyssa Edwards!"

We chitter chat, but not much offline, not yet, but it's gonna happen. It's in the future. I know, it's in the future! She's so funny and she inspires me and I love that she's herself unapologetically and that kind of person is a superhero to me. Being that little introverted, little awkward boy, it was people like that that I always admired. Well, talk about a dream come true and a plot twist all at once, I'm now that person.

Well we've got to get her on "Dancing Queen" Season 2

Okay, now we're putting that out into the universe!

Now that the first season of "Dancing Queen" is out, is there anything that was difficult for you to watch, or maybe cringeworthy? That first date kind of stands out as awkward as hell.

It was awkward but it needed to happen, that's me trying to date. It's kind of funny, I giggle. I thought he was a nice guy and I was just like, what do I say, I don't know what to say, he's shy too. And we started talking about mustard, like what the hell? Like what is this about?

It wasn't cringeworthy, it was giggle-worthy, that's what it was. You have to have those experiences where you look back and you're like, "Well.. add that to the list," and that was one of those moments. I've enjoyed it, it's been a hallmark in my life.

What would you like to focus on in a second season?

This last year I found, finally, found my missing puzzle piece. And I'll be celebrating one year, oh my gosh. This human has really just ... gets me, appreciates and celebrates, understands. He's also a dance teacher and, oh my gosh, it's all like a teenage dream. You can see I was kind of open to the idea of dating but still like a little unsure. I definitely think that my relationship has blossomed into something beautiful.

He knows that Alyssa is, kind of like my work. I don't come home in a wig, or you know, full 6 inch platform shoes, Alyssa has her room and she's stays in that room. It's like, it's my job, but it also is more than just that. It's a passion, I love being on stage and now I'm getting to use that platform in such a large light, so it's like, I'm living the coolest life, you know, Hannah Montana.

Have you seen "A Star Is Born" yet and what'd you think about some of the other "Drag Race" alums in there?

How dare you even ask me if I've seen it! Huge fan of Lady Gaga, huge, mega, superfan. Gaga if you are reading, watching, listening to this, thank you, thank you. I'm gonna leave it at that, thank you. And seeing the drag and then Shangela -- no secret that our relationship goes back years, years ago -- I felt proud.

I was looking around at all the people in the theater and it's so surreal, it's a little bizarre. You're sitting there and you're like that is one of my very best, best homies, family and I bought a ticket to this theater. Just the feeling is out of this world, and it encouraged me to really get myself out there.

We gotta get you in a movie musical, too!

That book of life gets written, it's there somewhere, if it's meant to be, it'll be.

Lastly, do you have any advice to anyone who wants to be Alyssa Edwards for Halloween this year?

Girl, you have to jack that wig all the way to the heavens and those nails and lashes have got to be longer than Dolly Parton's and have fun. Lots of smiles. Have fun with it. And look, it's just drag. Go out, live your best life, encourage and share your laugh and make other people laugh