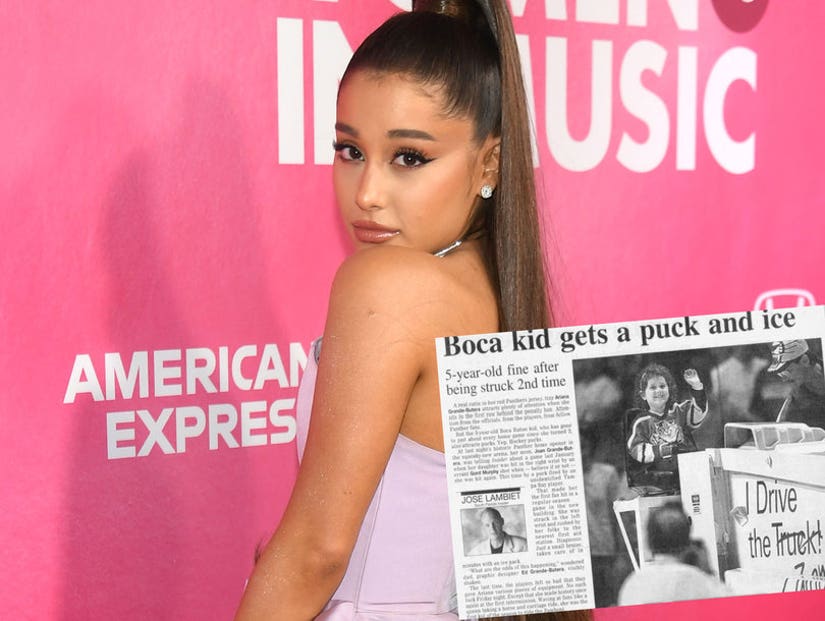 She was one cute five-year-old -- even with all those hockey puck injuries.

She's survived breakups, a war with the Grammys producers, donut-lick-gate, and being struck by an ice hockey puck... twice.

Hockey author Mike Commito stumbled across the Sun-Sentinel article from October 10, 1998, showing the little Ariana — her head a mass of cute curls before they were regimented into her trademark ponytail — joyously riding a Zambino ice-resurfacer with a gigantic smile on her face.

The throwback piece even caught the attention of Ariana herself, who tweeted it with the caption: "started from the bottom now we here #thankunext #fineafterbeingstruck2ndtime.

According to the piece the "Boca Raton Kid", who had attended every game since she was two, was with her mom Joan at the historic Panther's first home game in their brand new arena. She was telling someone about a January incident in which her daughter was struck on the right wrist by an errant Gord Murphy shot when — bam! —Ariana was struck again, this time on the left wrist.

She was rushed to the medic station and diagnosed with a small bruise, which was cured by an ice-pack.

After being gifted Panther equipment by the guilty team the first time around, this time she was placated by becoming the first person to ride the Zambino at the new arena, which she reportedly did "waving at fans like a queen taking a carriage ride."

Sharing a zoomed in shot of her adorable face, Ariana admitted: "If I'm honest ... this is still exactly what i look like without lashes and my pony ... anyone who knows me knows me knows ... like ... I'm twenty five. I was five here. The only difference now is that hand now says BBQ grill finger," referencing her infamously-misspelled kanji tattoo.

The unearthed gem went pretty much under the radar, mainly because she tweeted it on Sunday, the same day of her much publicized tweet and delete reaction to late ex boyfriend Mac Miller's snub at the Grammys.

She did however later edit her Twitter banner pic to show five-year-old Ariana holding aloft her own Grammy trophy.