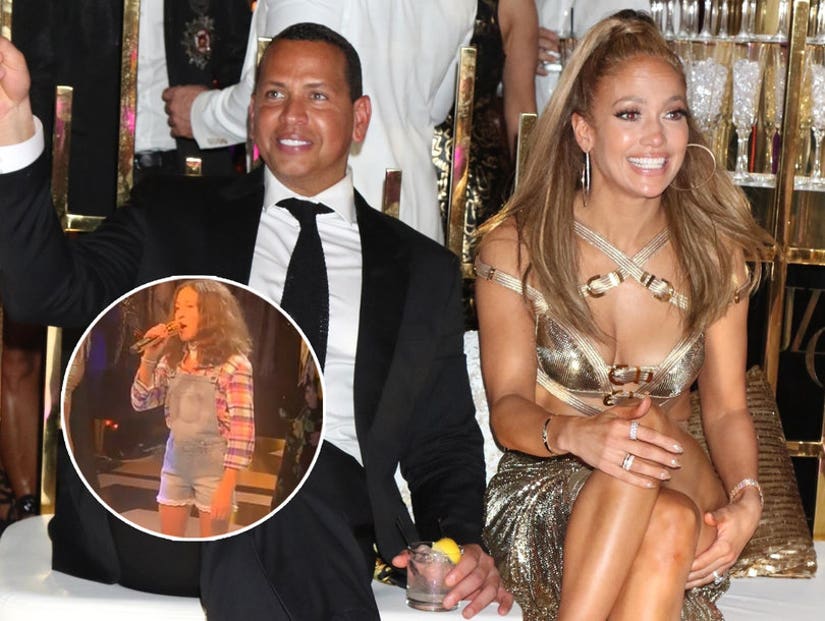 The two sang songs from "Mahogany," "Annie" and "Hamilton."

It can't be an easy task to perform for powerhouse performer Jennifer Lopez at her own birthday, but two very special people did it with ease on Wednesday night: her twins, Max and Emme.

The singer's 11-year-old children -- who she shares with Marc Anthony -- stole the spotlight during her massive party at Gloria Estefan's mansion in Miami, as they each got on the mic to sing for their famous mama.

In videos shared to designer Michael Costello's Instagram Stories, Emme was seen belting out Diana Ross' "Mahogany" classic "Do You Know Where You're Going To," before she and a few friends picked up some brooms to perform "Hard Knock Life" from the musical "Annie."

As for Max, he hit the floor after, rapping a few lines from the "Hamilton" song "My Shot."

The two were later seen sitting with their mother as "American Idol" alum Pia Toscano performed for the party. Other performers included Ashanti, Fat Joe, and DJ Khaled.

Ryan Seacrest spilled some more details from inside the party this morning on "Live with Kelly and Ryan," hours after flying back from Miami.

The host revealed that when he got to the celebration, he was told by security, "You're not on the list." After finally getting the OK to go in, he realized he was the first person to arrive.

"A-Rod gets up and makes the most romantic, sweetest speech to Jen in front of everybody, so I'm sucked into the romance movie and I don't want to leave. For me, this was worth the whole trip because it was so beautiful," he then explained, before showing a clip from inside the bash.

"I got emotional a little bit there," added Seacrest. "I said to Jen, it's so wonderful to see the two of you like that and in front of all of your friends and family. Their kids .. all their kids, they're so well mannered and well behaved."

Ryan said he was hoping to duck out of the party early, but was seated directly next to Lopez at her table. Eventually, he got outta there, only to realize later that "because of our job, we miss all the fun."

What fun did he specifically miss? Well, this: