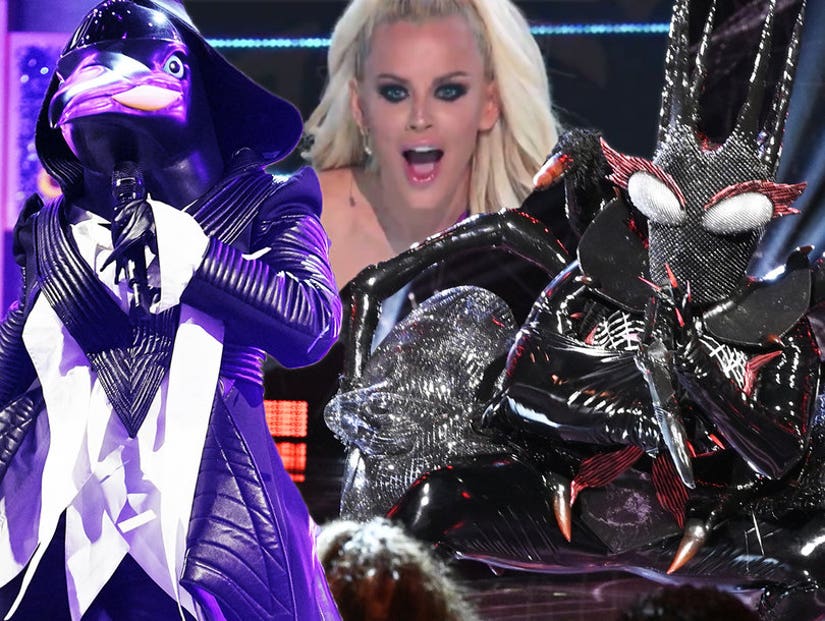 All the contestants hit the stage tonight, before two were sent packing.

It was a big night for "The Masked Singer" fans, as the show expanded to two hours on Wednesday -- meaning twice the performances and twice the totally insane guesses from the judges.

For the first six performers, they all gave one final clue after the judges revealed their guesses. For the final five, Anthony Anderson joined the judges' panel and the contestants were tasked with revealing something from their home as a hint. The intel was not helpful, with Cannon at one point exclaiming, "This show doesn't make sense at all" and Ken Jeung adding, "I actually think it makes it worse!"

While the two-hours were split into two episodes, we're going to go through all the performances below before revealing who was cut.

Rottweiler once again crushed it with some amazing vocals and a few dances moves the panel clocked as being reminiscent of a boy bander. He took on the OneRepublic single "Love Runs Out," showcasing his powerhouse voice with some impressive runs.

Guesses: Because of his moves, Robin once again said he thought it was Brian Littrell of the Backstreet Boys. Jenny thought it could be someone younger, like a Jonas Brother, but neither Nicole or Ken thought he was from a boy band at all. Nicole went so far as to say Littrell "doesn't have a voice like that." Ken guessed Pat Monahan of Train, before Rottweiler revealed he's a fan of Bruce Lee and Boyz II Men -- a clue which helped nobody.

Ladybug attempted to shake off her premiere jitters by tackling Lizzo's "Juice" and appeared much more comfortable on stage this time around.

Guesses: McCarthy assumed she was in her 20s and, latching onto a clue that she was from a famous family, guessed Paris Jackson. Ken guessed Lindsay Lohan again, getting quite a negative reaction out of Ladybug. Noting her intro package referencing "Pieces of Me," Scherzinger said it could maybe be Ashlee Simpson.

Tree took on a tough one with Aretha Franklin's "Think" and while her voice sounded solid on those big notes, her stage performance was lacking as she barely moved around the stage. The judges themselves moved around more than she did from their seats.

Guesses: After an intro package filled with food and Christmas movie references, Nicole guessed Amy Sedaris, while Ken went with Zooey Deschanel -- both from "Elf." Robin stayed with his Rachael Ray guess from previous weeks, while Jenny went with Padma Lakshmi, though nobody knew if she could sing. As a parting clue, Tree said she was a brand ambassador for something related to food, but that wasn't much help either.

Penguin made it clear she's not a professional singer as she took on Meghan Trainor's "All About That Bass." While her voice wasn't all that strong, she did appear to be having a great time dancing ... if only a little out of breath.

Guesses: Before she even performed, Jenny said the intro package made her think about Sherri Shepherd, a popular guess online. After the performance, Jenny said she thought she knew who she was and loved her -- and also guessed Nicole Byer from "Nailed It!" Scherzinger thought possibly Star Jones, while Robin threw out both Wanda Sykes and Mindy Kaling's names.

Flower's raspy voice came through again, hitting some very impressive high notes in Sia's "Cheap Thrills" and coming off like a seasoned performer throughout her time on stage.

Guesses: Ken stuck with his Bjork guess, though everyone laughed at him. While Nicole noted she thought it was Patti LaBelle last week, she was getting more of a Shirley Bassey vibe this time around. Robin called it a great guess, but also threw Jennifer Hudson's name out there, because why not.

Fox's stage presence blew away the audience, while the judges were living for his vocals as he performed "Hey Look Ma, I Made It" by Panic! at the Disco. He seemed comfortable on stage, dance break and all, and had the panel all over the place with their guesses.

Guesses: Robin said his voice reminded him of AJ McLean from the Backstreet Boys, while Ken guessed Jamie Foxx. Nicole, meanwhile, said he reminded her of Ne-Yo. As a final clue, Fox said he spent most of his life in a costume.

Black Widow kicked off the second hour with an R&B-tinged version of Cher's "Believe," hitting a few impressive notes without the help of a vocoder. She certainly sounded like a seasoned singer and had the entire audience cheering her name after the performance. Widow also got props for her "crouch game" and "mean lean."

Guesses: Thicke stuck with his Raven-Symone guess, which seemed popular among the judges. Jeung thought it could possibly be Miranda Lambert, pointing to Widow's Memphis roots. Most random and unpopular of all was Anthony Anderson's guess of Drew Barrymore.

Thingamajig proved he had the vocal chops to tackle The Temptations' "Ain't Too Proud to Beg," with a silky voice he seemed to control with ease. He appeared comfortable on stage and, once again, had Nicole's heart fluttering from the judge's booth.

Guesses: Thicke said tonight's performance made him only more sure it was Montell Jordan, along with the "This Is How We Do It" reference in the clue package. Jenny thought it could be a basketball player, while Nicole guessed Dennis Rodman -- though Anderson said Rodman couldn't sing. Ken, meanwhile, went with Ronnie DeVoe from Bell Biv DeVoe.

Butterfly moved effortlessly across the stage and had some solid control over her vocals, which were a bit on the nasal side. When it came time to wail while singing Norah Jones' "Don't Know Why," however, she hit the right notes.

Guesses: Noting the "unique texture" in her voice, Scherzinger said she could identify the voice as Michelle Williams from Destiny's Child. Jenny agreed, while Robin guessed British singer Leona Lewis. Ken had the wildest guess of all, saying it could be Norah Jones singing a Norah Jones song!

Again, Leopard didn't come across as someone who's known for their singing, but is clearly someone comfortable being on stage. His voice was a little gravelly, but he still put on a theatrical performance.

Guesses: Picking up on the word "Pose" being in the intro package, Nicole guessed Billy Porter, with both Anthony and Nick Cannon agreeing. Ken guessed Bobby Brown, before Scherzinger also threw Tyler Perry's name into the mix.

Flamingo took on "Never Enough" from "The Greatest Showman," going heavy on the drama by performing most of it standing still in a spotlight. She sounded like a seasoned performer and hit one of the biggest notes, but again, was maybe someone who was part of a group and not a solo artist.

Guesses: Both Robin and Anthony thought it was Fantasia Barrino, but believed she was maybe masking her true voice just a bit. McCarthy stuck with her Adrienne Bailon guess, which is almost certainly correct. In addition to hints from previous episodes that suggested it was Bailon, she also revealed tonight she has an NAACP Image Award -- an award her talk show, "The Real," has picked up twice.

Poor Penguin got the boot in the first hour and Jenny was ecstatic to see her guess was correct, as former "View" cohost Sherri Shepherd revealed her face.

"Sherri Shepherd, you belong on this show girlfriend, I love you so much," shouted Jenny. "Jenny knows me so well, she's been through two divorces and marriages with me, we've walked around naked in front of each other, she knows me and it was so hard not to grab your butt, Nick," said Sherri, who did the show after her son egged her on.

While Amber Riley and Miranda Lambert were both last minute guesses, both Nicole and Robin clocked this one. After Thicke said he was positive it was Raven-Symone because he wrote her a song once, she revealed that it was in fact her.

Raven said she loved the anonymity that came with performing on the show, but wishes she could have been a bit more mobile during her time on the show after breaking her arm on a hover-board early in the season.

"You called me a professional singer, I peed my pants," said the 33-year-old actress after she was unmasked. 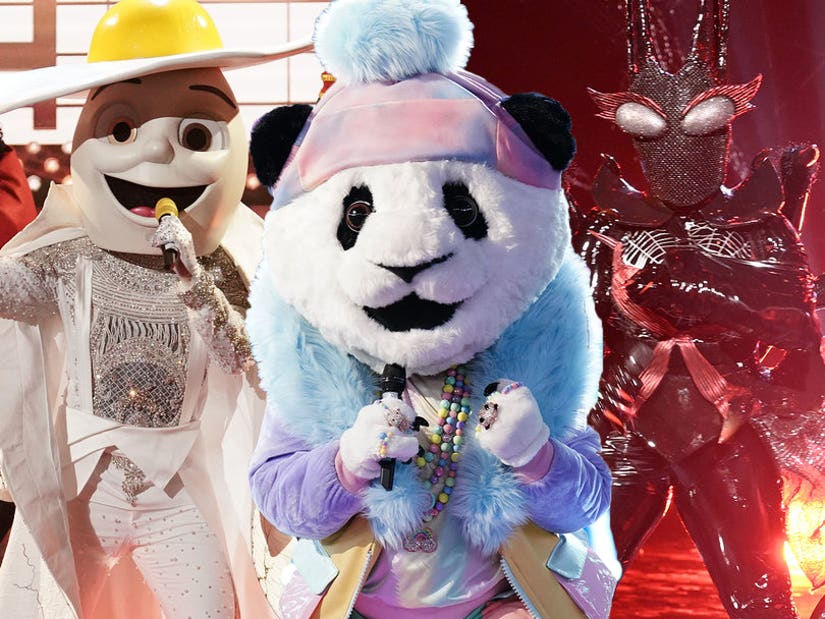