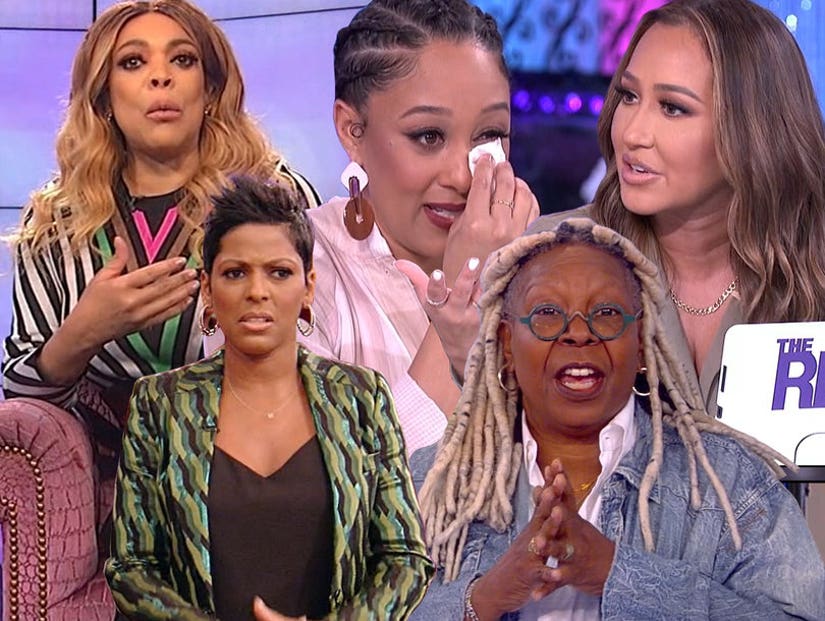 Wendy initially wanted to cancel her taping, while The Real teared up reflecting on how fleeting life can be.

The deaths of Kobe Bryant, his 13-year-old daughter Gianna "Gigi" Bryant and seven others in a helicopter crash over the weekend cast a somber shadow across daytime television on Monday morning.

"The View," "The Wendy Williams Show," "The Real" and "Tamron Hall" all began their shows with tributes to the late NBA superstar, his family and those lost in the crash. The theme of the day was living life to the fullest, as every show shared some version of that sentiment as they addressed the tragedy, sometimes through tears.

Keep reading to see how each show honored Bryant's memory. We'll update with "The Talk" when it airs.

REMEMBERING KOBE BRYANT: The co-hosts look back on the life of the NBA legend who tragically lost his life in a helicopter accident Sunday along with his 13-year-old daughter and seven others. https://t.co/FruPfXicZp pic.twitter.com/gfW0DmO7jR

"The View" began with a tribute to Kobe, as Whoopi Goldberg kicked off the show. "When people say you have to live each day to the fullest, this is what they mean," she said.

She also spoke about how her grandson -- "who was born with a basketball in his hand" -- was a huge fan of Bryant, with Goldberg saying the NBA superstar had been "part of my family for a very long time." Goldberg also sent their prayers to the families of all the other victims.

While Joy Behar called it a "terrible" situation, Sunny Hostin also revealed why their deaths hit her family particularly hard. "I spend every weekend with my daughter's basketball team and we were stunned and she took it particularly difficult," said Hostin. "She's a 13 year old basketball player and she knew about Gigi. We couldn't process it."

Sunny then praised Kobe for being a strong proponent for young women in sports, saying it meant a lot to have a former NBA player "saying you can do it too." Meghan McCain also said the videos of Gigi playing basketball really got to her, before sending prayers to Vanessa and the rest of the family. "I can't even fathom what they're going through right now," she noted.

Wendy reflects on the tragic deaths of Kobe Bryant and his daughter, Gigi. #KobeRIP pic.twitter.com/eFmWHUdPon

After the usually-exuberant host greeted her studio audience with her trademark energy and "How you doin'?", she transitioned into a more somber tone.

"I don't know where you were when you found out. Dammit man," she began, getting emotional as she brought up Bryant. She explained that she's not necessarily a huge sports fan herself, but knew Kobe was a "living legend," was someone her son idolized and was a man who stood up for commendable causes.

Williams said she initially wanted to take the day off. "I can't even deal with this," she said, revealing she had been planning a big trip with her parents when she found out what happened. "Live each day like it's your last," said Williams, "Not in a bad way. Hug the people you know. Sometimes you gotta let bygones be bygones."

"Immediately I go into show mode, I don't want to do the show, but I have to do the show because somehow this stupid show does make people come out of their own sadness at least for an hour," she added. "I feel like, I'm like the Pied Piper of Happiness, kind of. But I said, we gotta reconfigure the show. We were supposed to do Style Squad, breaking down the best and worst fashion of the Grammys. Forget Best and Worst, you're alive, we all look great!"

She added she'll see the Squad after the Oscars. "I can't deal with who's wearing what," she added, "We're alive, we're breathing and just live every day like it's your best."

Williams promised they're "gonna try to get it back in gear for tomorrow, but in the meantime just rock with us, okay?" She then devoted the next segment of her show to Bryant as she and former basketball star Charles Oakley spoke about the legacy Bryant leaves behind.

Today in #GirlChatLive: Tamera shares what it was like working with Kobe Bryant on "Sister, Sister." pic.twitter.com/zwmfT6zhEz

The most tears were shed during "The Real," as they also began the show paying tribute to Bryant and his daughter.

Loni Love began the episode, hoping they could first "celebrate" Bryant's achievements and send their condolences to his family. "You are just in our thoughts and prayers right now," she added, "may God hold you and guide you."

"When things like this happen, it really puts into perspective so many things," said Adrienne Bailon. "We should be grateful for our lives every single day. I think so many people on Instagram, one quote was going around a lot how we take for granted leaving our homes safely every day. I think that really puts into perspective what matters in life. Him even being with his daughter was like family matters, for me that's what matters."

Saying their daughters were Cheetah Girls fans, Bailon recalled meeting the Bryants on more than one occasion and called Vanessa "the sweetest woman." She added, "I can't begin to imagine what she's going through. I can't even fathom what their pain feels like. For real, just take a moment and pray for them today."

Tamera Mowry-Housley reminded viewers to "make sure you tell your loved ones you love them" and said moments like these change your perspective of family. She also recalled Bryant being a guest on "Sister, Sister" back in the day, saying she'll "never forget his humility," kindness and work ethic at the time.

Tearing up as she spoke about Vanessa, she continued, "She lost two people, she has to grieve her husband and her daughter. It just breaks your heart." She added, "It shows me life is fragile, life is short and I know we say that, but we have to really work hard to stay in the present moment. This is all we got, this moment right here. We don't know what's gonna happen to us when we leave. Tell your loved ones you love them."

Both Amanda Seales and Jeannie Mai reiterated that sentiment before a visibly emotional Love added, "We'll get through this."

"Everybody turn to someone right now and say I love you," she added. "Tomorrow is not promised and I think that was the wakeup call with this. I think this is a wakeup call for all of us. Things that are going on this country, that don't matter. End of the day, our life matters and loving each other matters."

Tamron Hall began the show by referencing the "very difficult weekend," adding that "We're all still in shock."

Hall said she was on a plane when she heard the news and "just wanted to get home, hug my child, hug my mom" when she found out what happened. "I moved to Chicago the day Princess Diana died, it had that same feeling where this universal pain, whether you're a sports fan or not, you felt it," she added.

As others have noted, Hall also said video of Kobe with his daughter added to the "collective gut punch" everyone felt.

Journalist Jemele Hill, who interviewed Bryant many times through her career, then joined her to talk about his legacy. "It's really very heartbreaking," said Hill and noted Gigi "was the embodiment" of her father.

"We don't know when this could be our last moment," she added.