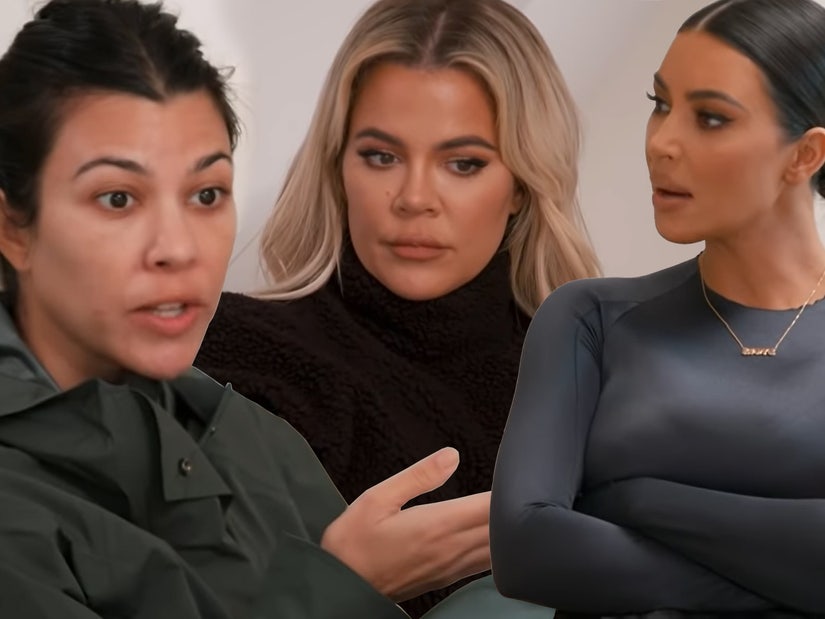 The biggest problem facing the Kardashians: Who would host the all-important Christmas Eve bash and their family gathering the next morning?

This episode of "Keeping Up With the Kardashians" kicked off with Khloe, Kris and Kim at lunch. Kris was feeling excited about the holidays, but her assistant was on vacation and she needed some help for the busy season. Khloe offered her services and Kris took her up on her offer. Kim even gave Khloe a mock interview to see if she was ready for the job.

This is why I have two Malikas. I always got a back up when one goes on vacation or if one has an unplanned pregnancy. - North West

At Khloe's house, Kim informed Kourtney and Khloe that Kanye didn't want to have the family Christmas Eve party at their house anymore and he wanted to give the party back to Kris. Originally, Kris had hosted the party every year since the '80s. Kim felt bad that she took the party from Kris but was now throwing it back at her. The girls were going to have a conversation with their mom, but  worried that if she didn’t want the party hosting responsibilities again, they might not have a Christmas Eve party for the first time in 40 years.

I refused to host the Christmas Eve party again because my home was completely disrespected in the previous year. Mason thought it was okay to stand on the furniture with his shoes on yelling, "Thug Life!" and Chrissy Teigen got drunk and tried to cook chicken pot pie in my kitchen. Basically, people don't know how to act, so I’m done. - NW

Scott's kids were starting to ask about his childhood and his past, so Kim helped him go through old photos at his house. While looking through them, Scott said that after his parents died he pretty much sold their house with everything in it. Talking about losing his parents wasn't easy for him and put him in a very vulnerable position, but Scott wanted to tell his kids about them more. Scott felt like his dad's best friend, Dave, was an uncle to him, so he decided to call him to make plans for a visit.

I'm sure the Disick kids are more interested in the story about the time Scott stuffed money into a waiter's mouth in Vegas. - NW

Kourtney hosted a POOSH movie night at her home in partnership with Paramount. Billy Porter, who starred in the movie, was in attendance. Kim thought it was ironic that Kourtney had a candy bar that wasn't sugar-free or gluten-free. Khloe said that Kourtney was "pooshing" her boundaries.

After many meetings with her lawyers and the network's lawyers, we came to a compromise. Auntie Kourtney will do glam and film as long as we're promoting her Tumblr page, POOSH. - NW

At the screening, Kim decided to tell Kris that she and Kanye didn't want to host the Christmas Eve party. She thought if she told Kris in a public setting, she couldn't get mad at her. Kris was in shock. She said passing the party to Kim was an honor. Kim asked her mom if she wanted to take the party back, but Kris said she couldn't because she's older and tired.

Christmas was right around the corner and there wasn't a lot of time to figure out a plan. Kim said she would ask other family members if they wanted to host.

I bet if there was some way that Kris could make 10% off of the party she would've been all in. She's so calculated. - NW

Khloe arrived at Kylie Cosmetics ready to work for Kris as her assistant. Her first duty was to put together promo kits and get the agenda for Kris' meetings. Khloe thought the day was off to a fabulous start and she loved the hustle of her work. Other assignments Kris had for Khloe included: eating snacks to make sure they were fresh, recording Kris' news show, heating up her coffee, and filling up her car with gas. Khloe wasn't sure if these were actual tasks she gave her real assistant or if Kris was just messing around with her.

Sounds like Auntie Khloe's day was a breeze. I usually make the Malikas do all of this before lunch. - NW

The Executive Vice President of Original Programming of E! popped into Kris' office and it caught Kris off guard. Khloe said she didn't stop him from coming in because she thought security would take care of it. Kris told her she needed to be alerted when the head of the network was there because she would handle herself very professionally. Khloe was annoying Kris more than she was helping, so she sent her away to run errands.

During a family lunch at Khloe’s house, the topic of Christmas came up. Kris asked Kourtney if she wanted to volunteer to host the Christmas Eve party because she loves Christmas and the birthday party she hosted at her home was so beautiful. She also proposed Christmas morning at Kylie's house. Kourtney thought Christmas at Kylie's house would be too over the top and she wanted something more down to earth, so she was not with that idea.

In the past, the family usually celebrated Christmas morning at Kourtney's house and she didn't want to give it up. Kourtney was happy to open up her home for the Christmas Eve party as well, but was firm on having Christmas morning with her kids at her home and nowhere else.

We all know that the only reason Auntie Kourt wanted to have Christmas morning at her house was for content for her Tumblr page, POOSH. - NW

While wrapping Christmas gifts at her house, Khloe asked Kris how she did as her assistant. Kris told her she was great, but she was too much of a daughter and not an assistant. There was too much chatter and it was easier to send her on errands so she could get some actual work done. Khloe wasn't mad because she still considered herself a talented assistant.

Nice to know Auntie Khloe has a back-up plan for when Good American eventually files for bankruptcy. - NW

Kim was torn because she wanted to be with the rest of the family, but her daughter, North, complained that Santa only went to Kourtney's house too. To compromise, Kim and Kylie proposed to spend Christmas morning with their kids at their own homes, followed by a brunch with a chef and servers at Kourt’s house. Kourt countered by suggesting that everyone have Christmas for their kids at their own house early and then come to her house for breakfast, with no chefs, housekeepers or any other professional help. Kendall sided with Kourtney. There was no decision made so they decided to table the discussion for later.

Personally, I thought that Christmas morning at Auntie Kourt's house was played out. I entertained her gluten-free Christmas for long enough. I told mommy either I open gifts at my own home or cancel Christmas altogether. Either way, I don't care. I can buy whatever I want anyway. It's the rest of the family that needs these presents, not me. - NW

Scott went through boxes of old photos from his childhood with Uncle Dave, his kids, Khloe, and True. When Scott's parents passed away he thought going through the photos would just make him sad, but he was glad that Dave brought them because it actually brought up some amazing memories. Even though he missed them, Scott realized the more he talked about his parents, the more his kids would feel connected to them.

At the final meeting about the Christmas Eve party with their party planner, it was decided that everyone would do early Christmas morning at their own houses, then meet at Kourtney's around 10am. Kourt was hesitant because it was the first time they did Christmas this way.

Kris and Khole wanted her to have a certain set-up, but Kourtney wanted to stick to her way of doing things. Khloe ended up feeling bad about picking on her sister because she really stepped in and saved Christmas Eve and wanted to make everyone happy. However, she also admitted that it's always fun to torment family members.

Kourtney worked really hard planning the Christmas Eve party and her vision really came together. The party was special and had a warm feeling. Kanye's Sunday Service and a performance from Sia. The family spent the night dancing, singing, and eating. Everyone appeared to have a blast.

Having Christmas morning at my own home was so refreshing. I got to sleep in and I didn't have to hide my expensive gifts from the rest of the less fortunate family members. For once. I could enjoy my Fabergé egg without feeling bad that Dream only got a Polly Pocket. - NW

"Keeping Up with the Kardashians" will return for new episodes in September. 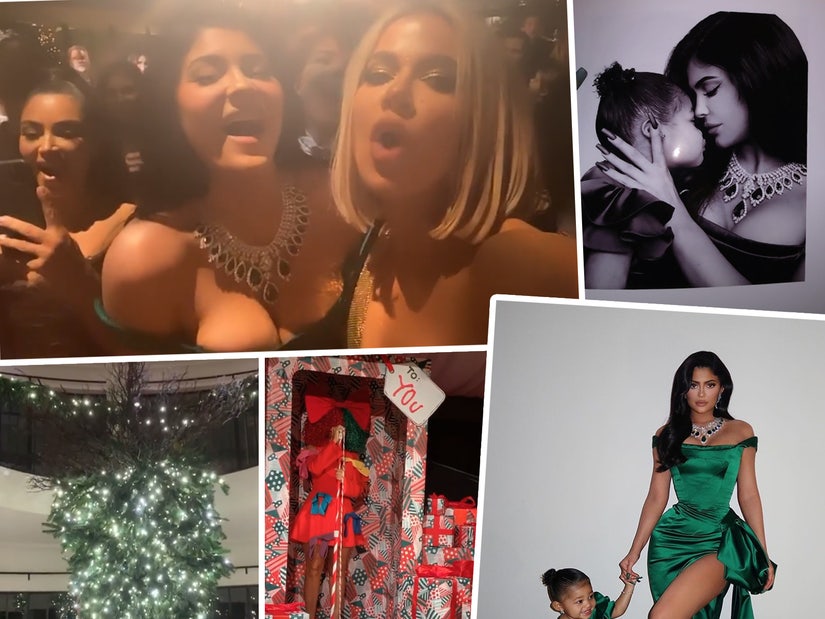