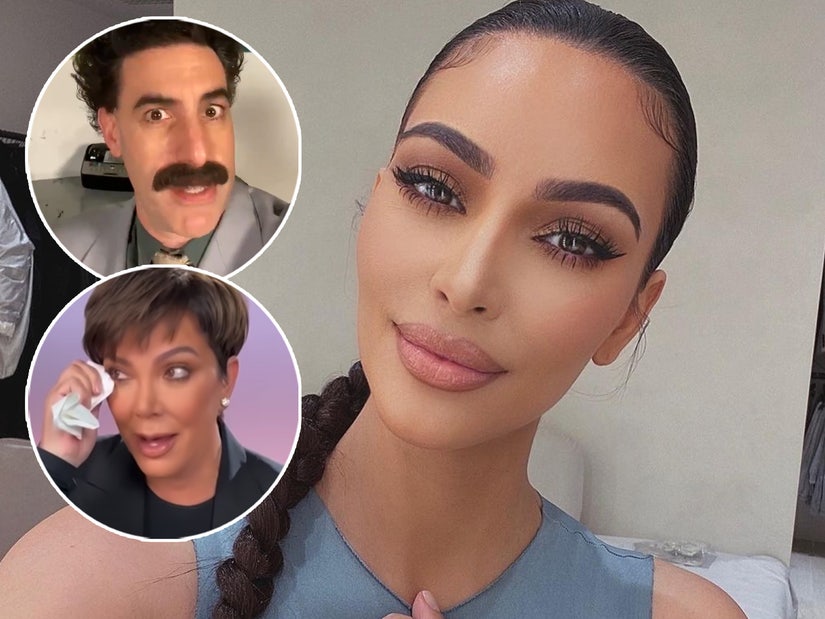 Sacha Baron Cohen sent Kim a video message for her big day, in character as the Kazakh journalist.

Kim Kardashian turns the big 4-0 today and her social media mentions are being flooded with birthday shoutouts from her famous friends, family and fans.

One of the best shoutouts so far comes from actor Sacha Baron Cohen, who filmed a video message for Kardashian while in costume and character as his on-screen alter-ego Borat ... just in time for his sequel to drop later this week.

"Happy Birthday Kimothy," he said in the clip. "Kazakstan just get your televiski show. I like! My hram has been 'Keeping Up with the Kardashians.' My favorite sister is you. My second favorite, Kris, and the hottest sister of all to make hand party to is Rob. Happy Birthday!"

Her husband, Kanye West, paid tribute by sharing a photo from their engagement back in 2013.

Been doing empty stadiums Happy 40th birthday!!! I love you so much pic.twitter.com/dCgHhzP2J8

Other friends to show love on their Instagram Story -- which Kim then re-shared -- include Victoria Beckham, Nicki Minaj and Caitlyn Jenner's manager Sophia Hutchins. Her mother, Kris Jenner, also posted her tribute to her Story -- sharing a photo of Kim as a little girl with the caption, "Happy Birthday to my Kimberly. I love you more than words could ever express."

Khloe Kardashian, meanwhile, used a lot of words to try to express her feelings for her sister, sharing a lengthy post on Instagram.

"Happy birthday Keeks!!!!!!! I'm screaming, It's your birthday!!!!!!!!!!!" she began. "My entire life, you've always been someone that I have admired. Still do and always will. Your determination, ambition, grace, ethics, your eagerness to make a change, I can go on and on. You do it all with poise. You are a glamorous super woman in my eyes!! I'm not sure how you do it and yet you make everything look so seamless."

"The way you balance being a daughter, sister, Mommy, wife, friend, businesswoman, everyone's go to for advice, concierge service to many LOL, It's all very impressive. You make it all look so easy," she continued.

She went on to praise her sister's "magnetic energy" and her ability to make everyone "feeling empowered and full."

The entire family also recoded video messages to Kim, which were shared on the KUWTK YouTube page.

Scott Disick kicked off the messages, telling her, "The good news is, you don't look 40 and that's all that really matters, right?" He went on to praise her accomplishments, before joking, "when you're 80, you'll probably look 40."

Kendall Jenner told her she was a "rock star," while Kylie Jenner called her "such a special light in this world" who gets "better and sexier with age." Kourtney Kardashian welcomed her to the "40 club ... from the most exciting to look at," adding that Kim has "taken over as the boss" of the family.

Kris also got emotional in the clip, saying, "I don't think I can do it," before grabbing tissues and restarting her message twice. After composing herself, she soldiered on, saying Kim was her "whole heart, my whole world and I'm so proud of you and everything you do for all of us."

"I can't say anything else without crying," she added. "I think I'm just gonna have to write you a letter!"