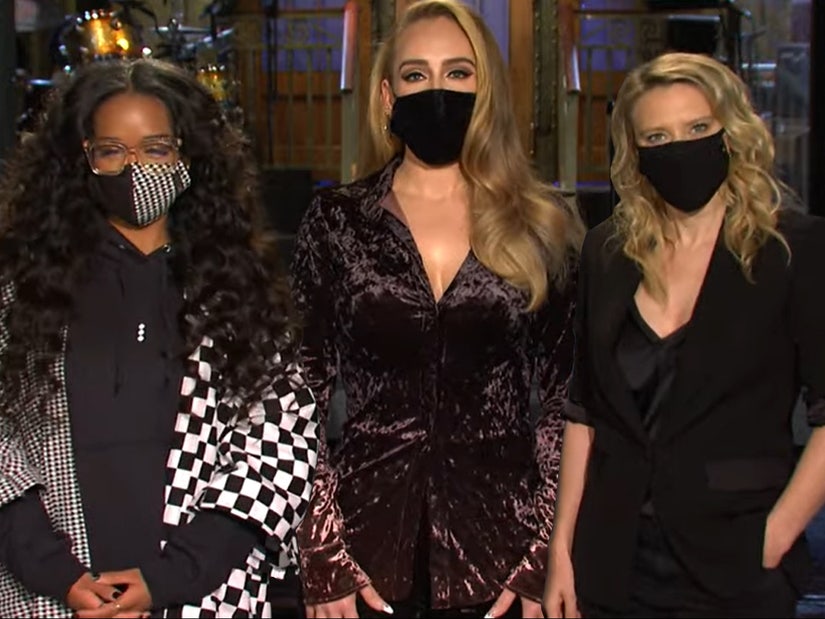 Viewers are in for a treat this weekend as Adele makes her debut as host for "Saturday Night Live."

While Adele appeared as a musical guest twice in the past, that honor goes to H.E.R. this time around, something they and Kate McKinnon all poked fun at in a new promo for the show.

"I'm Adele and I'm hosting 'Saturday Night Live' this week with musical guest H.E.R.," Adele says at the top the clip. A confused McKinnon asks for clarification, pointing at both singers and asking, "Her or her?"

A "Who's on First?" situation unfolds, before it cuts to the next promo.

In the second one, McKinnon mimics Adele's British accent, before realizing that was probably a "bad idea."

Adele uses that opportunity to then show off her own American accent -- which comes out as a cross between Valley Girl and Southern -- as she exclaims, "Oh my god, no worries girlfriend!"

When it was announced she'd be taking over the show for its October 24 episode, the singer said she was "so excited" and "also absolutely terrified" about the gig.

"My first ever hosting gig and for SNL of all things!!!! I've always wanted to do it as a stand alone moment, so that I could roll up my sleeves and fully throw myself into it, but the time has never been right," she wrote on Instagram. "But if there was ever a time for any of us to jump head first into the deep end with our eyes closed and hope for the best it's 2020 right?"

"It'll be almost 12 years to the day that I first appeared on the show, during an election ... which went on to break my career in America, so it feels full circle and I just couldn't possibly say no," she added, referring to her 2008 appearance. "I am besides myself that H.E.R will be the musical guest!! I love her SO much I can't wait to melt into a flaming hot mess when she performs, then confuse myself while I laugh my arse off in between it all."