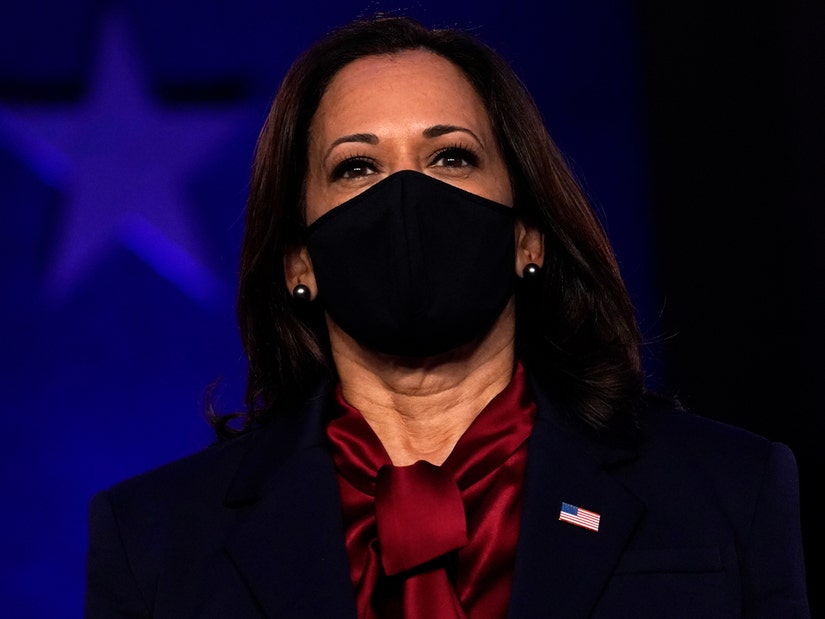 "'Madam Vice President' is no longer a fictional character."

Hollywood and beyond are celebrating Kamala Harris' historic win as the first woman, first Black woman and first Asian American woman to be elected Vice President of the United States.

After Joe Biden and Harris were declared the winners of the 2020 presidential election on Saturday morning, celebrities, public figures and more took to Twitter to share their excitement and joy over Harris' making herstory with her monumental win.

We did it, @JoeBiden. pic.twitter.com/oCgeylsjB4

Actress Keke Palmer wrote, "I'm so inspired and truly astonished to look and see a black woman in this position. I say BLACK because representation MATTERS! In America I have searched over and over again as a black girl for people in positions of power that look like me!"

Mindy Kaling, who recently gave birth to her second child, tweeted, "Crying and holding my daughter, 'Look baby, she looks like us.'"

Julia Louis-Dreyfus, who famously starred as a female VP on "Veep," wrote, "'Madam Vice President' is no longer a fictional character. @KamalaHarris."

Lizzo shared a video on her Instagram, in which she became emotional over Biden and Harris win.

Meanwhile, with Harris named as the Vice President-elect, her husband, Doug Emhoff, will become the nation's first Second Gentleman and the first Jewish man in the White House. Emhoff, a lawyer, shared a sweet photo of himself embracing his wife following the news.

"So proud of you," he wrote alongside the photo, above.

Read on to see how Hollywood and beyond, including many Black and South Asian women, are reacting to the historic news of Harris becoming the Vice President-elect.

Tears of Joy! What a day! History has been made! We did it! @JoeBiden @KamalaHarris #BidenHarris #America pic.twitter.com/Gbz28fEzyj

I’m so inspired and truly astonished to look and see a black woman in this position. I say BLACK because representation MATTERS! In America I have searched over and over again as a black girl for people in positions of power that look like me!

Crying and holding my daughter, “look baby, she looks like us.” pic.twitter.com/Gy4MAPoNjy

Congratulations Madam Vice President! You have made herstory.

Today and for years to come when you think of the Vice President of the USA, you’ll think of a BLACK WOMAN!!! That’s sooo beautiful 🤎 I can’t wait for my future daughter to see this printed in the books

FOR EVERY LITTLE GIRL. pic.twitter.com/6AomM3ieyb

There are so many people happy about @KamalaHarris!!! Celebration across generations, across pillars of the Black Community & the Indian American community: from young girls, to #TheDivineNine, #HBCUs, @HowardU, the Black Church. People are thrilled! #VPHarris #BidenHarris2020 pic.twitter.com/ZPH2wu6Vqy

A BLACK & SOUTH ASIAN WOMAN AS OUR VP! 🇺🇸

My niece asked if Kamala will bring curry to the WH. The most innocent question but there’s more to it.

A life she identifies with will be celebrated & respected in the White House.

As a South Asian woman, I’m inspired. We did it.

My daughter said “Mom, that can be me.” Lawd I am so full. #MadameVicePresident #KamalaHarris https://t.co/1xANBPm82m

How exciting that young black girls will finally be able to see someone who looks like themselves as VP for the first time in history .. tuh !!!

The daughter of an Indian immigrant woman is Vice President of the United States. I didn’t think that would happen in my life time. It’s a beautiful thing.

Every time I see @KamalaHarris my heart leaps with joy not only because she has made history by being the first woman #usvicepresident but she is an inspirational black woman who will inspire girls across the world to aim high ❤️ pic.twitter.com/4IxaooQ2Ub

Think of all the little girls in America and what this will mean to them. My granddaughters will grow up with a woman of color in the White House and not see it as at all remarkable. I love that this will be part of their “normal.” #MVP https://t.co/cSODvE79BE

Look I know it’s complicated representation but there is a Black South Asian American woman in the White House and it’s so different from where we were on this day in 2016 that I am overwhelmed. https://t.co/rm0rUpOWal

What’s getting lost in all of this is SHOUT OUT TO THE FIRST BLACK FEMALE VICE PRESIDENT @KamalaHarris pic.twitter.com/12Zm4HY5Kl

Don’t know about you folks, but I am inexplicably moved & emotional right now. And Kamala! Not just 1 but 3 firsts that fill me with more hope for us & for generations after us who get to grow up with her as VP. @KamalaHarris

Kamala Harris will be the highest ranking woman in american governmental official history.

Can we also just take a moment to recognize HERSTORY being made with @KamalaHarris as the first WOMAN and WOMAN OF COLOR Vice President!!! 🤩 pic.twitter.com/rofRwKJ2gz

Kamala Harris shattered the ultimate glass ceiling — for all women: But Harris is more than a token to women, Black people and South Asian people. She is competent, reasoned, reasonable, intellectual and highly qualified. https://t.co/WVch6BiYye

When the Constitution was written in Philadelphia more than 220 years ago, the founding fathers couldn’t imagine that a Black woman would one day help govern this country.
Today, the city delivered the last votes that will reshape America’s imagination. https://t.co/m4g7NxXBKW