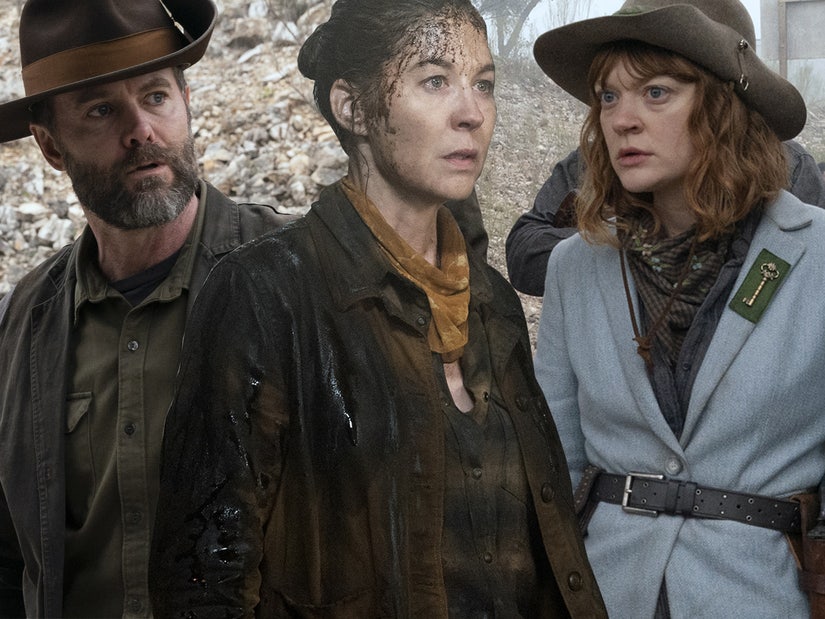 "When I read it, my heart slid down into my gut," Elfman tells TooFab.

While June scored a huge victory on Sunday's "Fear the Walking Dead," it's one that came at a big cost -- and a loss star Jenna Elfman says "broke my heart" when she read the script.

The sixth episode of the sixth season, "Bury Her Next to Jasper's Leg," was all about June, struggling to work as a medic for the Pioneers with the limited resources provided to her by Virginia (Colby Minifie). With John (Garret Dillahunt) pushing for them to run away, the two were eyeing a new start.

But an explosion in Tank Town changed everything, after the outsiders leaving their "The end is the beginning" graffiti on Virginia's land launched an attack and blew up their oil field. 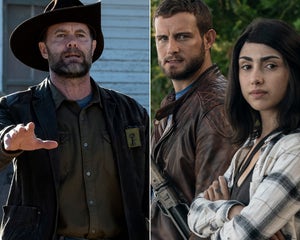 Ginny's decision to interrogate and torture one of the workers instead of quickly evacuating the scene led to her and June getting trapped -- and Virginia getting bit by a walker. June had a choice to make: help this woman who had made their lives a living hell, let her die or straight up kill her with an axe.

In a decision that will surely enrage fans, she amputated the arm and allowed Virginia to live. In exchange, she demanded a real hospital to run, where she saw fit and with workers she personally chose. In June's eyes, it was a big win. John, however, wasn't ready to fall in line with Virginia's ways and wanted to get as far away from her as possible. In the end, instead of following June's caravan, John decided to desert her and go out on his own.

TooFab caught up with Jenna Elfman herself, who reacted to June's shocking decision to let Ginny live, revealed how devastated she was to see John's choice and teased the outside threat that's "much scarier than Virginia."

Reading the script for the first time, was there a moment where you truly believed June might let Virginia die?

I did have pleasure in the fantasy of that [laughs]. And I think that June having the upper hand, knowing that she's bit and then getting on top of her with an axe to her neck is also a moment to relish. That was not lost on June. I definitely, as the actress, played that moment. I felt that, it's a very powerful position to be in.

It's like a -- not for herself but on behalf of Virginia -- 'To be or not to be' [situation]. To let her live and what opportunities that might open up and what leverage that gives June and what kind of stripes on her collar that gives her for the group, versus just letting her die. And the temptation, the human temptation of someone who's such an asshole, that you can just let them die and how satisfying that it. It's not like it didn't cross her mind. I think it's a real thing that June was navigating, those two choices and how it would affect every aspect from her personally, her relationship and all the people she wants to help in the community and understanding what this bigger threat is, versus if you let her die, what does that do, what are the ramifications and freedoms and potential dangers and how that would affect the group. That's all on June's shoulders right now.

It's a lot to take in, while also in the middle of an explosion ...

You know there are going to be a lot of viewers angry June didn't take out Virginia when she had the chance. What do you have to say to them?

Now that June and Virginia have some kind of understanding, as dubious as it may be, what does that mean for their relationship going forward?

June's valuable to Virginia because of her abilities, already. I saved her life kind of doubly because I could have just let her die from the bite and I also could have just chopped her head off and actually killed her. But to June, if you can save someone and you let them die, it's the same as murder. From Virginia's point of view, I think it shows a lot about who June is to Ginny. Ginny's gonna probably try to find a way to use that integrity of June to Ginny's benefit.

June's decision to stay with Virginia led to John running off solo at the end of the episode. What was your initial reaction to seeing they would once again be separated, this time by choice?

It broke my heart that John couldn't deal. It just killed me, just to read that. People are making choices based on their own integrity. For him, to not change is his integrity. For June, to make this decision so she could help more people and have that leverage to have the hospital, that's her integrity. To help people, no matter what, that was her purpose before the apocalypse, that's her intention still, the thing that keeps her sane and oriented in this world and feeling like she's a meaningful part of it. So she's staying true to herself, he's staying true to himself and that's driving them apart.

Obviously, we don't see her reaction to him going his own way. What can you tease for what this means for June and how she feels about him going ahead?

I think it's devastating. I think it's really devastating. It's that feeling of, she's trying to understand, she wants him to tell her what's going on, she needs to know what's going on and he won't tell her, he won't open up, he's just saying we gotta go. But that's such a big choice that could have such life or death ramifications, you can't just not tell me what's going on. Then I'm seeing how bad it is, I'm like, 'I'm gonna help these people and we'll roll,' and then I'm like, 'No, actually, things have changed. Listen, you'll fall behind right, because I got the thing now, this is new and there's some other threat, it's not just Ginny.' He's like, 'Yeah, I'm out. I'm sticking to my thing.'

They're both trying to survive by staying true to themselves and there's value in that, to the degree that if you're compromising yourself constantly, you're going to be weak to others. It separates people sometimes. When I read it, my heart slid down into my gut. It was just horrible. June was a lot more optimistic, she's on this high of making this big choice. And he just could not, that didn't bring him up.

There is this other group threatening the Pioneers and Virginia and their attacks seem to be escalating. What can you tell us about what's to come?

I think that it's much scarier than Virginia and she's been like a real f--king nightmare for us and this is worse than her. It's gonna really involve everybody, it's gonna engage all the characters in very big ways.

Did you feel even more badass filming this episode, with all the fire, walkers, fighting and explosions?

Totally. I think people are at their best when they're being challenged, because you are on your toes and you gotta rise to it. It was 30 degrees when we were sopping wet at the oil fields doing that whole scene, it was torturously cold, so the stakes physically felt high, the story stakes were high, the choreography of the stunts and the fight were high. It was very, you know you're alive. It was really stimulating.

And then the stunt choreography and the fight with Ginny and having an axe to her throat, how satisfying that felt and having the upper hand, just playing June in that moment, it just felt so satisfying. I knew that the audience would gain pleasure from putting themselves in June's shoes for that moment and living through that thought process and the satisfaction of having the power to let her die or murder her and just having the upper hand and sitting on top of her with an axe to her throat felt so good.

You posted on social media that you loved having a female writer for this episode, can you talk a little about how that made it feel different.

It felt like the emphasis, the various -- what's the plural for emphasis? Emphases? -- were in the correct place, from the female perspective of what's important. I just love that, because you have Ginny and June and they have goals, they have purposes and each woman is fully committed to them and they are coming into conflict and I just thought it was written with the right importance in the right areas of what would be true for a strong woman and articulated and handled in the way that brave women who feel passionately about what they're doing would behave.

I don't think that men, just as I don't know I could ever write the nuance of a ... I don't know, there are certain things when you come to the line, women respond and have nuance just as men do. They're different and not one is better than the other, they're just different and both are valuable. When it comes down to potent story and character dialogue and how women will articulate what's important to them, truly important on the life of death level, I thought it was well done and important that a woman would write it.