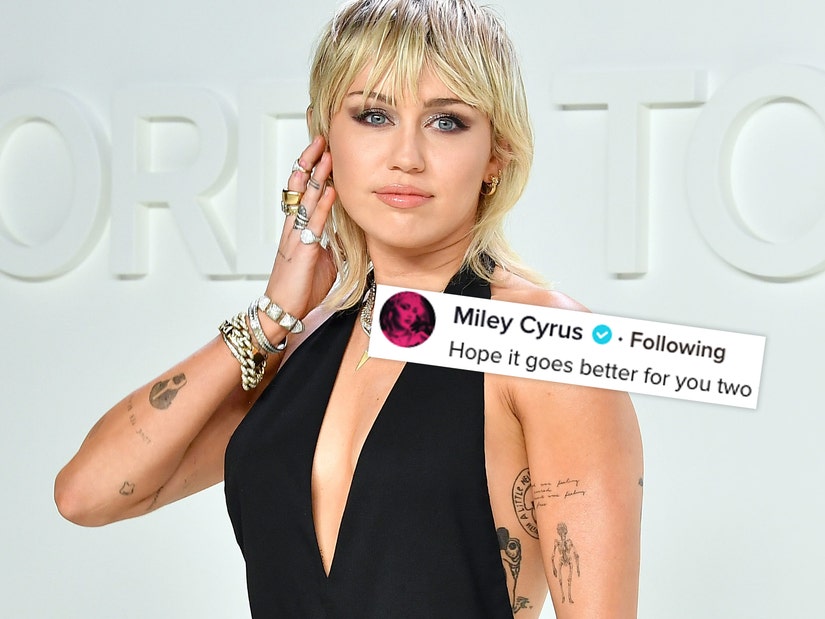 She also asked one fan out on a date.

Despite putting out an album and performing at nearly every virtual event possible, Miley Cyrus apparently still has a lot of free time in quarantine. And she's spending it on TikTok.

This week, the singer has been very active on the social media platform, diving into the comments of anyone using her song "Plastic Hearts" in their videos. As she began responding to her fans, it became a trend to dare her into communicating with them with messages like, "if miley cyrus comments we will get married" and "if miley comments I'll get whatever tattoo she wants."

To the marriage post, she replied, "Hope it goes better for you two than it did for me." She added, "Congrats," and emojis of a ring, skull and crossbones and a black heart.

To the tattoo post, she wrote, "How about the time and place of our first date?" She then added the emojis for hearts, lips, cherries and a tongue. The surprised TikTok-er replied, "I'm down to take you out anytime."

One user wrote, "If Miley Cyrus comments on this I'll dye my hair and tell my crush I like them." Miley had her make good on her promise by asking "What's his name" and, in a followup comment, "or her."

Another said they'd shave their head should Miley reply. That one, she loved, commenting, "PULL A BANGERZ MILEY." Even the official TikTok account for the Detroit Lions jumped into the comments there, telling the user they "better come through for Miley on this one." So far, she hasn't.

When one person wrote they'd go do their homework "and not go back to [their] ex," Cyrus told them, "School is good kids."

She told one fan to grow out their mullet, told another they should dye their hair darker and sent one fan an address to send a special gift to. One teacher she replied to promised to let their class "have a party ... in the USA" should she comment, while another user promised to wear a skirt to make their father angry. "Make sure it's short AF," wrote Miley.

One user poked fun at Cyrus by saying she was "hard at work making impulsive decisions for teens on TikTok." Miley replied telling them, "don't listen to me WTF DO I KNOW." That, of course, is also the name of a song on her new album.

When someone asked why Cyrus has so much time on her hands, she simply replied, "QUARANTINE."

She even responded to one teen who was upfront with the fact they wouldn't do anything should she comment on their post. Her reply: "Love the honesty LOL."