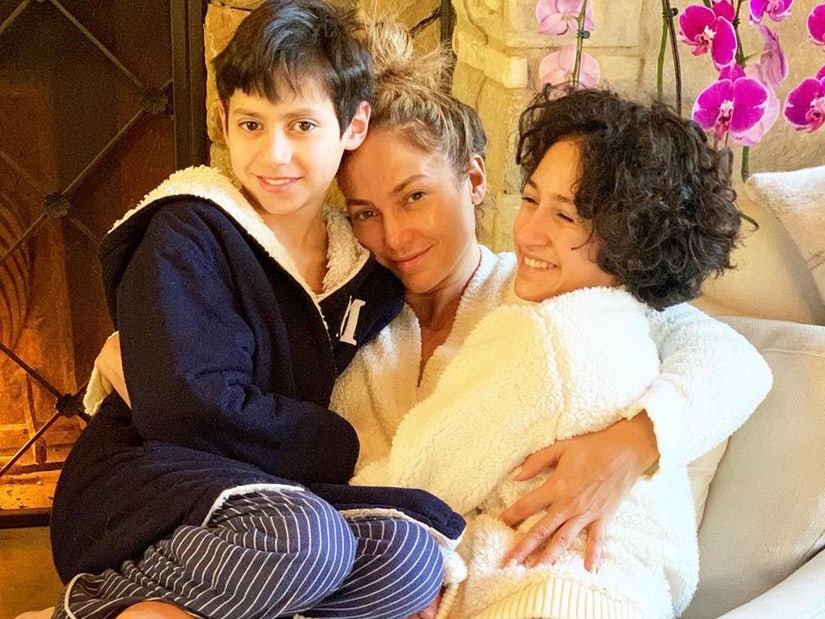 Two is better than one for these famous families!

Welcoming a new baby is always a special occasion and for some parents, they're surprised with a set of twins! Lots of celebrities have experienced the emotional rollercoaster of learning they're expecting twins and one thing is for sure -- it's double the fun in their households!

From Jennifer Lopez and Marc Anthony to Mariah Carey and Nick Cannon, here are the celebrities who have welcomed twins…

After tying the knot in 2004, the former couple welcomed their twins Emme and Maximilian four years later. Although Jennifer and Marc split, it looks like things are all good for the family, who regularly reunite for special occasions. The duo have even released an album together and Jennifer says they're "like best friends."

"We're just in a really great place, and the kids get to spend time with the two of us more together and see us working together. [Remaining close is] just good for the whole family," Jennifer said on "Live With Kelly and Ryan."

Beyoncé and Jay-Z are parents to twins Rumi and Sir, who they welcomed back in 2017. When she announced her pregnancy, it became one of the most liked Instagram posts of all time. Since then, Beyonce and Jay have kept the lives of their twins relatively private, but occasionally share some sweet family photos online.

"The girl is really just going to rule the world, and the boy is kind of laid back and chills like the dad" Beyonce's mom once shared with Us Weekly.

Chris Hemsworth and Elsa Pataky are parents to a set of twins named Sasha and Tristan. The private couple welcomed the two boys in 2014 and are also parents to a daughter named India.

George and Amal Clooney welcomed their three-year-old twins Ella and Alexander in 2017. George recently opened up about raising the children, who he says have very distinct personalities.

"It's funny, they're twins, but they're very different. Ella is very shy around adults. We have a Saint Bernard puppy, Rosie, and she's like 125 lbs. of sheer energy. She got stung by a bee, and now when we walk the dog and hikers go by, Ella kind of hides her face while Alexander walks right up and says, 'Rosie got stung by a bee.' He explains it to every single person," George told People.

While married, Angelina Jolie and Brad Pitt welcomed three biological children in addition to their adopted children. Angelina gave birth to her youngest children, twins Knox and Vivienne, back in 2008. Not much is known about the 12-year-olds but they do take after their mom as a philanthropist. In 2019 they were spotted selling dog treats at their local dog park to help animal rescue organization, Hope For Paws!

In 2011, Mariah Carey and Nick Cannon announced the arrival of their twins Moroccan and Monroe, who they affectionately call Roc and Roe. While the couple are no longer together, they're on good terms and often reunite for important occasions.

"We will always be family and we make it work. We still have fun, reminisce, and joke. And we are both certain that Roc and Roe are indeed our light. Every day they give us new life," Mariah wrote in her memoir "The Meaning of Mariah Carey."

Celine Dion and her late husband René Angélil welcomed twin sons, Nelson and Eddy, in 2010. She recently wrote a sweet note to the boys on their birthday, noting that she was sure their father was watching over them.

"Nelson and Eddy, you have been bringing so much joy, love and laughter into our lives every single day for the past 10 years. You make me, your big brother and your Dad, who is for sure watching over you, so very proud," Celine wrote.

Sarah Jessica Parker and Matthew Broderick share twin girls named Marion and Tabitha, who were born in 2009 via a surrogate. While the couple keep the lives of their children, including son James, very private, SJP did wish the twins happy birthday in a sweet note on Instagram.

"Sisters. You turned our lives inside out and upside down, filled and continue to fill all the remaining space with endless surprises, romance, sentimentality, art and a bounty of a sort of love we didn't even know we were missing," she wrote.

Neil Patrick Harris and David Burtka share twins Harper and Gideon, who were born via surrogate in 2010. The tight-knit family have become known for their detailed Halloween costumes, most recently dressing up as characters from "Willy Wonka."

"Kind, smart, clever, hilarious, savvy, intuitive, ingenious - they are my absolute prides and joys. I love them with every ounce of my being," Neil wrote on Instagram while celebrating their birthday this year.

As for their personalities, Ricky said, "Matteo is more into the arts and Valentino is gonna spend his life in front of a screen because he wants to be the best YouTuber in the world."

Kym Johnson and Robert Herjavec's twins, Haven and Hudson, were born in 2018. Kym says the duo are growing up to have the sweetest personalities.

"Haven, our little girl, is the boss. I think that's a girl thing though. And Hudson, he's just the happiest little kid. He just adores his sister and loves her. But they’re both just so sweet and adorable and starting to interact, so that's fun to see," Kym told HollywoodLife.

Madonna adopted her twin daughters Estere and Stella from Malawi in 2017. The girls, who are now six-years-old, seem to love music just as much as Madonna!

Diddy and the late Kim Porter welcomed their twins Jessie and D'Lila back in 2006. Since Kim's passing, Diddy has been raising the girls full time and seems to be loving every moment of it.

"Time is flying and I'm enjoying every second of it. I thank God for blessing me with such humble, kind, sweet, amazing girls. Kim is definitely smiling down on you two beautiful girls. I love you both so so much!" Diddy wrote on Instagram.

Zoe Saldana and Marco Perego celebrated the birth of their twin boys Cy and Bowie in 2014. While the couple has been extremely private about the lives of their children, Zoe says the boys are hustlers who "gang up" on her and Marco.

"We see them always sitting in a corner congregating. Oh my God, they're hustlers," Zoe told People.