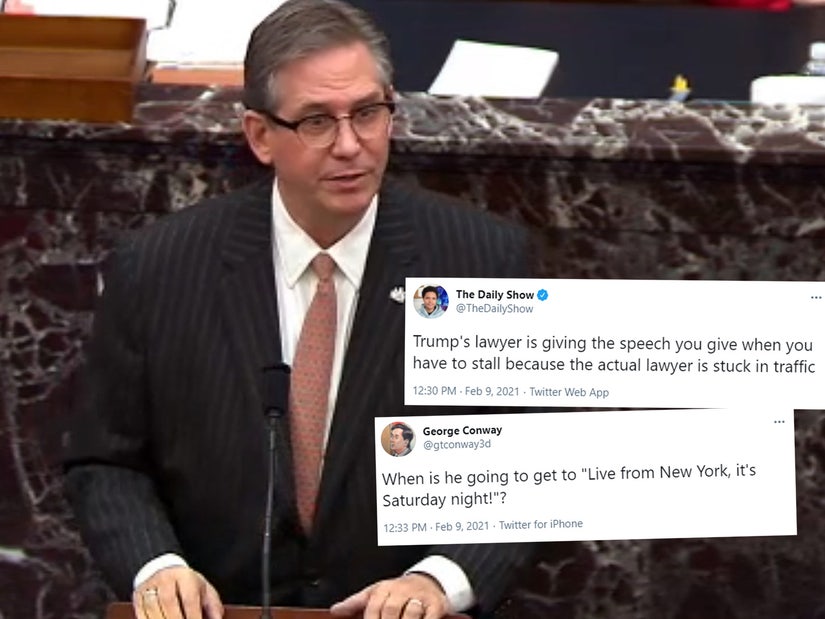 "When is he going to get to 'Live from New York, it's Saturday night!?'" tweeted George Conway.

Trump's defense lawyer Bruce Castor Jr. began his arguments for the second impeachment trial against the former President on Tuesday and many were bewildered by the opening statements.

While his speech was meant to lay down evidence against the accusation that Trump incited the January 6th Capitol siege, Castor quickly found critics questioning what was actually being said on the Senate floor as he rambled through a slew of topics.

Did Bruce Castor take a wrong turn and end up at the wrong trial? pic.twitter.com/pX33sBJXQH

The confusion even resorted to right wing and Trump-supporting network Newsmax interrupting their broadcast of the trial to ask attorney Alan Dershowitz where he thought Castor was "heading with this."

"He just went off, I don't understand it," he added. "It does not appear to me to be effective advocacy."

How bad is Bruce Castor's presentation in defense of Trump so far? Newsmax cuts into it so Alan Dershowitz can trash it.

What the fuck is this Bruce guy talking about? He’s making zero sense and is really bad at this.

Just catching up on the #ImpeachmentTrial here. Is this ol' boy Castor a for real attorney?

Dershowitz wasn't alone, as Hollywood came to drag Castor too.

"What the f--- is this Bruce guy talking about? He's making zero sense and is really bad at this," tweeted Alyssa Milano, as Jeffrey Wright shared, "Just catching up on the #ImpeachmentTrial here. Is this ol' boy Castor a for real attorney?"

When is he going to get to "Live from New York, it's Saturday night!"?

And Kellyanne Conway's husband George Conway summed it up succinctly with his tweet, "When is he going to get to 'Live from New York, it's Saturday night!'"?

Other social media comedians compared the speech to The Weeknd's Super Bowl Half Time show, Mentos commercials and "the worst college lecture of all time."

I haven't been so confused since injecting disinfectant was brought up in the WH briefing room.

Bruce Castor said get me that suit pic.twitter.com/t3LcNyqGSj