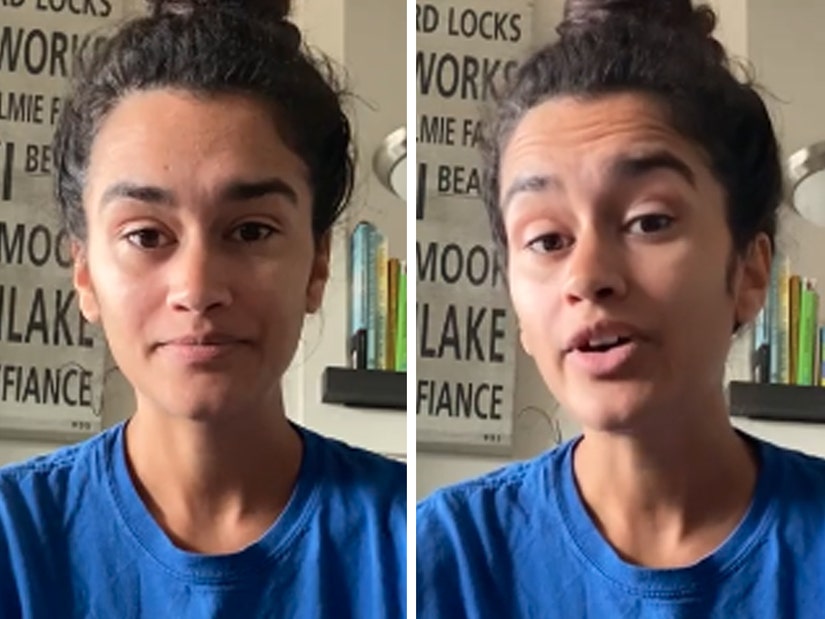 Nolan's apology came just one day after she called for "Bachelor" franchise host Chris Harrison to be fired after he defended contestant Rachael Kirkconnell.

Bachelor Nation's Taylor Nolan has apologized for offensive tweets from her past.

On Sunday, the 27-year-old "Bachelor" alum shared a 30-minute video to her Instagram profile in which she offered an apology and explanation for her resurfaced tweets. In addition to the lengthy video, Nolan also posted several clips to her Instagram Stories as well as two written statements.

In her tweets from 2011 and 2012, which went viral on Reddit over the weekend, Nolan insulted several minority groups, including Indians, Jews and Asians. Other posts featured fatphobic comments as well as homophobic slurs.

"My tweets from ten years ago are s-----, they suck, they were wrong, and are hurtful," Nolan began in the caption of her apology video. "I want to be clear that they don't take away from the work I do today, they are literally how I got here to doing this work. If you're gonna take the time and energy to scroll through ten years of my tweets then please take your time to listen to this video."

Nolan said she didn't delete the tweets because "they've been a part of [her] journey since way before" she went on "The Bachelor."

"I didn't need anyone to call those things out to me to know they were wrong," she continued. "I've been doing that work on my own for the last ten years and it's the same work I do today and the same work I will continue doing for the rest of my life."

"To my fellow BIPOC community and the other folks who I harmed in those tweets, I see you, I hope you see me, we are in this together and I'm sorry I didn't always stand with you," Nolan added. "I'm sorry I centered my whiteness and the whiteness around me. I'm sorry I wasn't better then, but I am here now and will always be."

The mental health counselor then called out the people who she claims are "out to get [her,] who can't stand to look at their own racism, who hate the things [she's] saying about racism and white supremacy."

"Those tweets do not invalidate my work today and I will always be open to hearing how to do better from my BIPOC counterparts," Nolan concluded. "I hope you can consider giving me some of ~grace~ you push so hard for white bachelor alum to receive for things they have in the recent past or present time said and done that were harmful…for the work I've been doing the last ten years and currently to unpack internalized racism and fight against things like fat phobia and white supremacy."

In the video, the psychotherapist admitted she used to hate herself because of the "white supremacy that [she] was raised in."

"I was surrounded by whiteness ... that was pro-white and that was what felt safe to me," she continued. "I thought, 'If I am in with these people that then they're not gonna hurt me,' which is flawed, which is incredibly flawed." 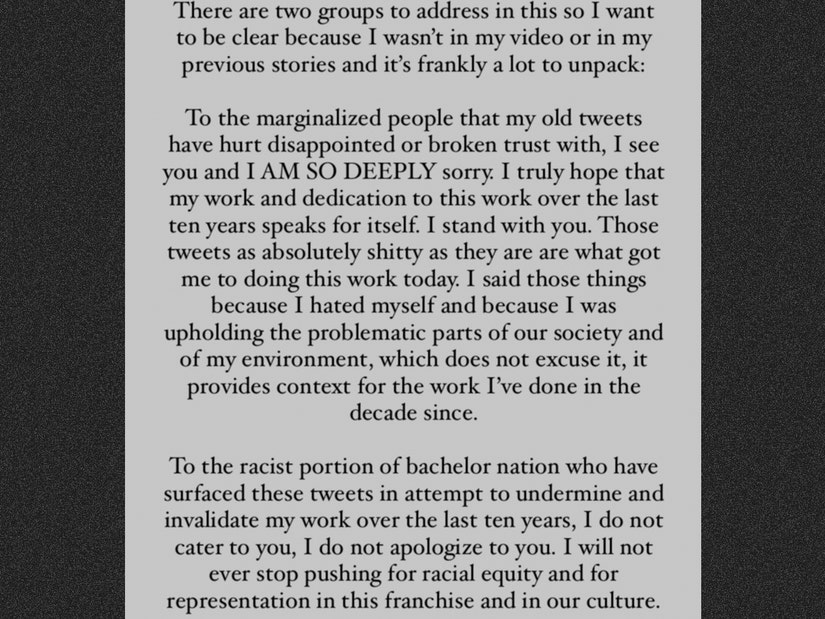 Elaborating more on her Instagram Stories, Nolan said, "The perspectives that I held in those tweets from almost 10 years ago, I do not currently hold nor have I for many years."

"They're literally how I got to doing this work in the first place," she explained. "A lot of that stems from my own internalized racism from growing up in a white supremacist culture, from experiencing the racism that I did and thinking falsely that I could protect myself by being close to whiteness. That was how I protected myself, that was, honestly, my trauma response, was upholding white supremacy, which obviously, I speak out a lot on today and that's because I very well know how to see when someone is doing it, because I used to do it."

Meanwhile, later on Sunday, Nolan shared another written statement in which she further clarified comments she made in her video and also added more to her apology. The "Bachelor in Paradise" alum also claimed she's been "attacked and harassed online for weeks," prompting her to disable comments on her account "due to extreme harassment and death threats."

Nolan continued to criticize those who resurfaced the old tweets, claiming they came from "'anti-woke' Bachelor Reddit."

"These tweets were not surfaced in good faith and were in direct opposition to the work I do today for all those communities who were hurt by my tweets, and I wanted to fight against that," she wrote."

"Folks who were upset at the standard bachelor Reddit page covering politics and advocating for BIPOC contestants created their own subreddit that is essentially the 'anti-woke' bachelor Reddit. I do not apologize to you. None of this is for you. You are relentless and I will not let you continue to cause harm. None of this was to help those communities but to create chaos and distraction," she continued, adding that the people who found the tweets were attempting to "invalidate and distract from the work being done."

Nolan went on to note that people who she "hurt" have "every right to be upset," "disappointed" and "shocked."

Nolan's apology posts came just one day after she called for "Bachelor" franchise host Chris Harrison to be fired after he defended contestant Rachael Kirkconnell over her past racist behavior during an interview with former "The Bachelorette" star Rachel Lindsay. Following the controversy, Harrison released a statement, saying he is temporarily "stepping aside" as host of "The Bachelor" after "excusing historical racism."

However, Nolan said Harrison "should be fired" and "should not be able to hold his position for many reasons, but especially after the abuse and aggression towards Rachel Lindsay." Nolan described Harrison's interview with Lindsay as an "honest and passionate defense of racism."

Nolan competed on Nick Viall's season of "The Bachelor" back in 2017 and went on to star -- and win -- Season 4 of "Bachelor in Paradise."