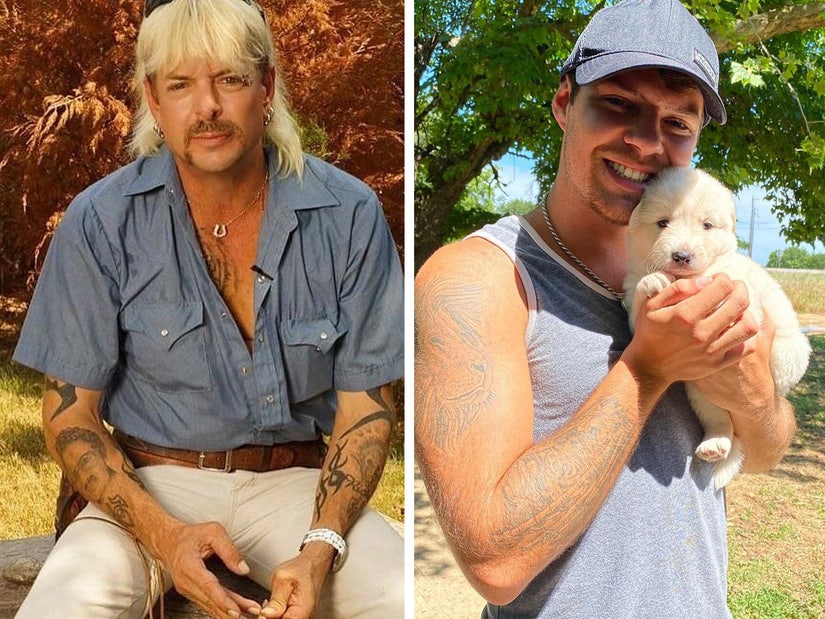 "I don't need the fame, the money or the bullshit, you can have it all."

As we near the one-year anniversary of the release of Netflix's "Tiger King" documentary, the relationship between star Joe Exotic and his husband is showing serious signs of strain.

On Tuesday, Exotic, also known as Joseph Maldonado Passage, called out his husband Dillon Passage on social media -- lumping him in with others who he feels have become obsessed with money and fame.

"Money destroyed my entire family. I won't allow it to kill my soul," he tweeted out. "You win, Dillon, Jeff Duncan, Carole."

...It’s pretty sad to be in prison and still mean fucking nothing that ya can’t even answer a phone. I see where I stand. #justiceforjoeexotic #tigerking

Duncan is Passage's manager, while Carole, of course, is Joe's nemesis Carole Baskin -- who he was convicted of trying to kill in a murder-for-hire plot. He's currently serving 22 years in prison after being found guilty on two counts of murder-for-hire and multiple Lacey and Endangered Special Act violations.

"Come March 22nd for Travis's Birthday I am going to keep his promise I made the day he died," Exotic continued, referring to husband Travis Maldonado, who died by an accidental gunshot wound. "I don't need the fame, the money or the bullshit, you can have it all.."

In a follow-up tweet, he added, "It's pretty sad to be in prison and still mean f---ing nothing that ya can-t even answer a phone. I see where I stand." He also used the hashtags #JusticeForJoeExotic and #TigerKing.

"Unfortunately it isn't the healthiest place to deal with personal affairs and not how I normally handle my relationship challenges," he continued. "Joe is obviously having a difficult time in prison and I don't think any of us can fault him for that. I've never spoken poorly of Joe, through the ups and the downs and through his good and his bad. I see through all of this and recognize and realize it for what it is; a man in prison just trying to do his best."

"The presidential pardon we were all waiting for never came and our hopes were dashed," he continued, referring to Joe's pleas to Donald Trump. "I remain in support of Joe and want to be there for him. At 25, I also need to make sure I'm healthy, both body and mind. I know even though Joe may rant, he wants the best for me as I do for him. I am certain he wants me to lead a full life as all of you do for the people you love."

He went on to say that he didn't and still doesn't "want the spotlight" and is doing his best to "support Joe, live my life, and love my dogs." Passage also reminded his followers to "Be gentle to people on social; you never know the challenges they are dealing with and the hardships they carry. There is always a hidden struggle for all of us."

Exotic and Passage have been married since December 2017, tying the knot just two months after Maldonado's death.