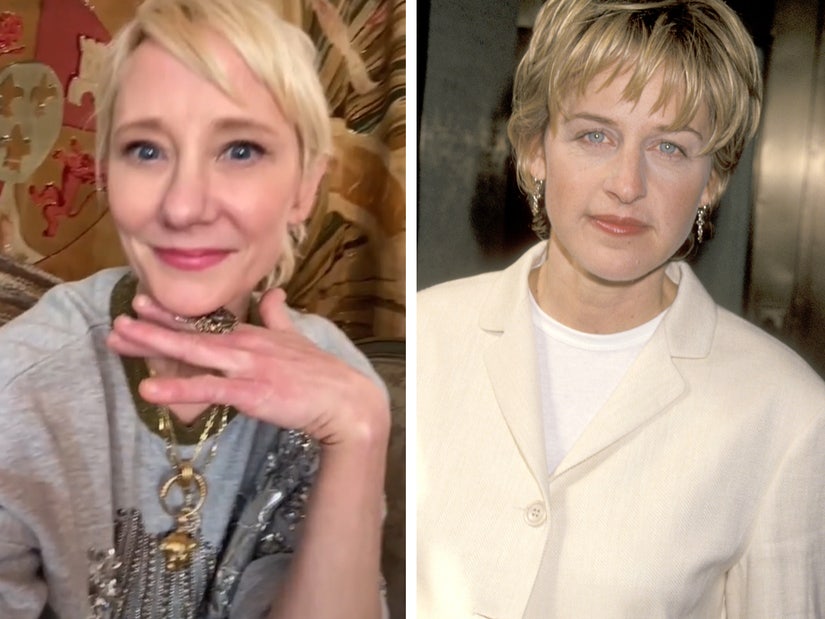 Heche wasn't thrilled to see DeGeneres pop up as one of her look-alikes.

Anne Heche is fairly new to the TikTok space, but she's already made headlines with two of her videos. And both of them have included a mention of ex-girlfriend Ellen DeGeneres.

In her latest clip, uploaded on Thursday, May 6, Heche tries out the shapeshifting filter -- morphing into three different celebrity lookalikes.

The first result was a shot of DeGeneres from the 1994 Cable Ace Awards -- three years before Ellen came out as a lesbian and started dating Heche in 1997.

Heche gave quite the priceless reaction, as a recorded voice said, "OMG not her." The second photo was Charlize Theron -- which Heche was "not mad about" -- before the app brought up a professional photo of herself. "There we go!" she exclaimed upon seeing herself.

"Disappointed but not surprised," she captioned her video, along with the hashtag #joke.

While the video makes it look like the app was selecting the celebrity lookalikes for Heche, many of the comments pointed out the user usually selects the photos to be morphed into when using this particular filter. If it's a photo with multiple people in it, it will morph the user into the person they supposedly look like most.

In another video from April, Heche rated some of her most "iconic" red carpet looks -- and also spilled some tea about DeGeneres in the clip.

The photo in question showed the then-couple together at the 1998 Golden Globe Awards, with Heche wearing a velour look.

"Why do I look like a hippie?" she asked. "It's because Ellen didn't want me to dress sexy. Bye, no!" She also gave the look a thumbs down.

Heche and DeGeneres dated from 1997 to 2000, before she later married "Men In Trees" costar James Tupper, with whom she shares two children. DeGeneres, meanwhile, has been with wife Portia de Rossi since 2004.