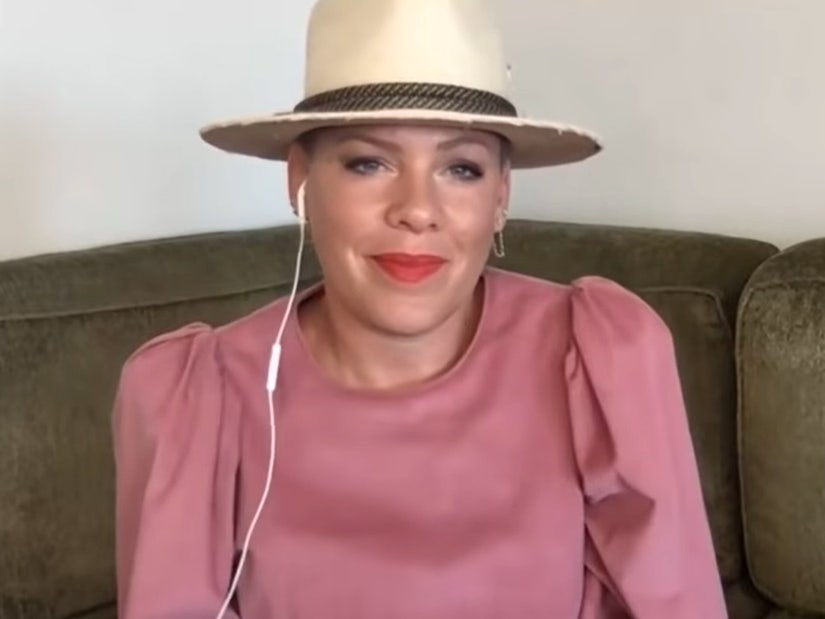 She also revealed the "shady" way she got then-estranged husband Carey Hart to appear in her "So What" music video.

P!nk made her return to the "Watch What Happens Live" clubhouse on Thursday night, filling the half hour appearance with stories about Britney Spears, Madonna, Adele, the Super Bowl, her husband Carey Hart and how her first dip into the so-called "lady pond" ended in disaster.

During the episode, the singer was asked whether she watched the "Framing Britney Spears" series and to share her thoughts on it as someone who came up in the industry at the same time. She was also asked about Spears' conservatorship.

"I love Britney and here's the thing about all of us voyeurs, none of us know what's going on, we're not there," she replied. "I would like to, I think we all would like to and we feel this fierce protectiveness over her for good reason, she's a sweetheart. All I know is she's incredibly sweet and I want her to be happy."

She said she had watched the docuseries and revealed that it made her feel sad that she just "didn't know" what was going on "back in the day."

Later in the hour, she was asked whether she really turned down doing the halftime show at the Super Bowl in 2019.

"Yeah, sort of. I would have a lot of fun doing it and it would be great, but I feel like nobody can win at that anymore," she explained. "It seems like anybody that does the halftime show, people just pick them apart."

"It's no longer, 'Wow, that took a lot to do' or 'They put a lot of effort into that' or 'Hey, good job, you showed up and tried hard even if it wasn't my kind of thing,'" she continued. "It seems like everybody just attacks everybody that does it."

She also said she would have taken a knee, which would make some viewers "upset" -- and hoped the organizers would instead give the spotlight to Atlanta rappers. "I thought, let me just step back," she added.

After several artists turned down the gig in solidarity with Colin Kaepernick, Maroon 5 would end up doing the halftime show that year, with appearances from Travis Scott and Big Boi.

Throughout the rest of the show, P!nk confirmed that she had taken a dip in the "lady pond" when she was much younger.

"My first girlfriend, I was 13 and she left me for my brother," she revealed. "Yeah. I was very confused by that, because she kissed me first and that's gross."

She was also asked whether it was hard to get Carey Hart into the music video for "So What," a song inspired by the couple's split at the time.

"Actually, yes, because we weren't together. We hadn't spoken in months," she told Andy Cohen. "He didn't hear the song before the video. And as we were filming, I had the line 'And you're a tool' taken out. He never heard that either."

Admitting it was "a little shady," she said she's "okay with it" -- and added that Hart is a "good sport" with "thick skin."

P!nk also opened up about her admiration for Madonna and reacted to Adele saying that attending one of her concerts was a "defining moment" in her life. Watch the video below.