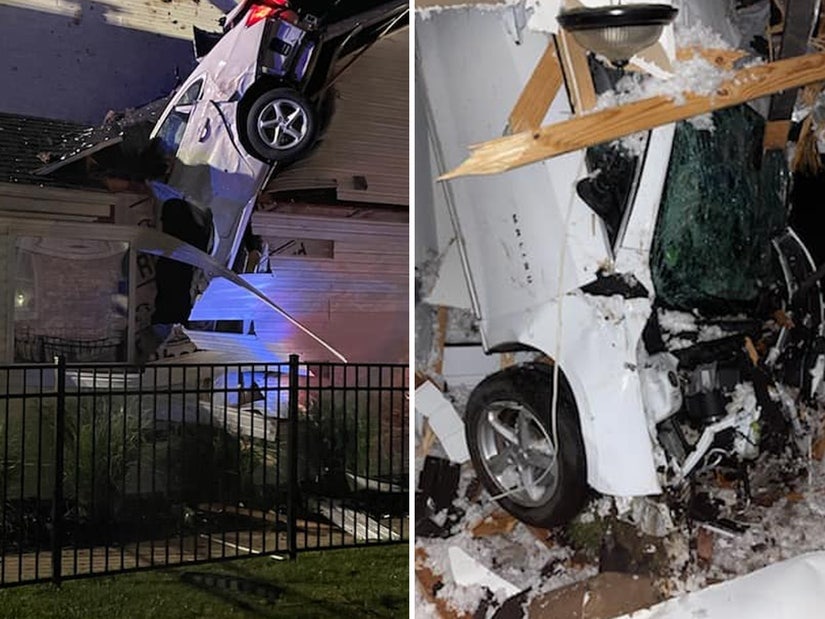 Is there anything worse than being woken up early on a Sunday morning by loud teenage drivers?

Probably not, according to one Missouri couple who opened their eyes to find a Chevrolet Malibu in their bedroom.

The accident occurred at 1:30 AM in Eureka, near St. Louis — and somehow, nobody was hurt.

According Eureka Fire Department Deputy Chief William Stamberger, two teenagers were driving home from a graduation party on Thorntree Lane, which runs parallel behind the home, when they lost control.

Eureka FD Division Chief Scott Barthelmass told TooFab the car struck a 10ft pine tree, uprooting it and sending it flying through the window of a house. The car then hit a fence and catapulted into the air, smashing nose-down through the roof of the neighboring house, landing perpendicular in the master bathroom — just ten feet away from where the homeowners were sleeping.

As the two 18-year-old males crawled out of the car — miraculously unscathed — and into the couple's bedroom, the husband jumped out of bed and ran downstairs to grab a garden hose to dowse a small fire that had ignited.

Also escaping injury were the couple's sons, who were asleep in the home at the time, as well as the neighboring family who woke to find a ten foot pine tree in their house.

In total, the car traveled about 100 feet from the point of the crash to its resting point in the bathroom.

"They were truly lucky" Deputy Chief William Stamberger told Fox2 at the scene. "In fact, it's an extreme success story that everybody survived this with the potentials there could have been."

"There was people sleeping six feet away from it in the master bedroom, and a child sleeping upstairs. So there could have been the potential for... disaster, if you will."

Police were also called, but no arrests were made; according to Barthelmass they found no evidence of alcohol or impaired driving.

"It was probably just reckless speeding, and maybe not making the best decisions," he mused.

"I've been with the fire department for 29 years, and it's the craziest thing I've ever seen," the chief added.

After the extensive clean-up of the physical mess, its now up to the driver's and the homeowners' insurance companies to try to figure out the financial one.

"Well, Farmers have seen a thing or two," Barthelmass chuckled. "Now they have this one in their notebooks."

And in another crazy twist of fate, as pictures on the Eureka Fire Department Facebook page show, the entire crew had been at their training center just two days earlier... practicing car extraction.

"One of the scenarios was actually car into structure," Barthelmass told TooFab, "but it was just ground level."