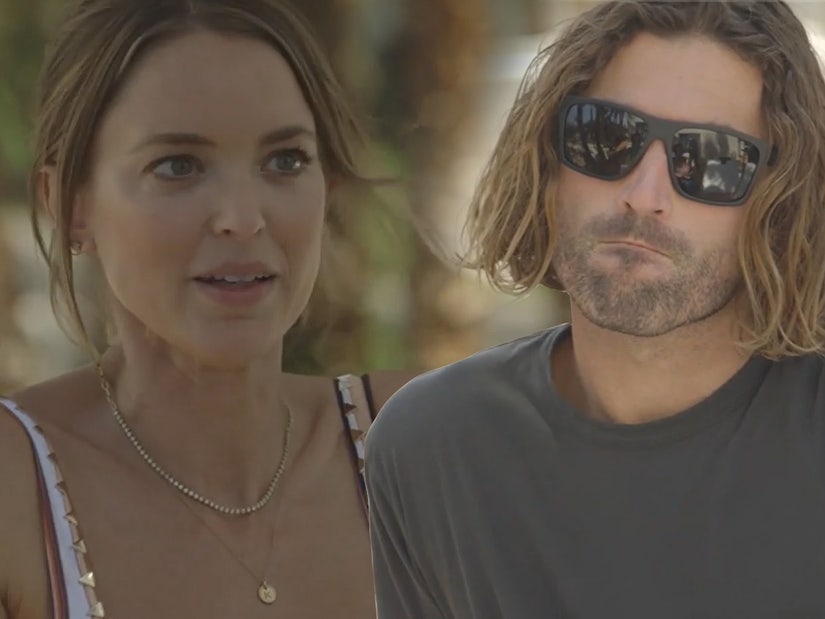 Saying it felt like "one final nail in the coffin" of their relationship, Carter finally revealed her pregnancy to Jenner on The Hills.

On Wednesday night's new episode of "The Hills: New Beginnings," all eyes were on Carter during a wellness retreat with the entire cast. While Caroline D'Amore knew she was expecting, nobody else did -- but they were certainly starting to suspect it.

Not only was she not drinking alcohol, but her growing chest had everyone asking whether Carter had a boob job. After they all learned she was already moving in with her new boyfriend Kristopher Brock, the pregnancy talk skyrocketed.

As Carter stepped away from the group, the speculation about her continued -- with Brody saying he only cared about her happiness. He said he believed she was pregnant after picking up on her energy and he wasn't alone in his thoughts.

In a confessional, Carter said she "definitely" wanted to tell Brody herself before he found out from anyone else, but was nervous to have a "difficult conversation." Making it more uncomfortable was the fact that "having kids was a big point of contention in our relationship" before they split. She was clearly picking up on everyone's speculation, saying it was "starting to get weird" -- and added that telling Brody felt like "one final nail in the coffin" of their relationship.

Brody, meanwhile, expressed frustration that it felt like she was keeping something from him.

"I know Kaitlynn's pregnant and I don't know from her," he said, wondering why she wouldn't just be honest with him. "I am her best friend and I've been very supportive," he added, not really listening to his female costars when they said women sometimes wait until they reach a certain point in their pregnancies before letting more people in on the good news. "What about me? What about how I feel?" he asked.

"Of course it's hurtful to see all these other people that seem to know that she's pregnant and not me," he continued in a confessional. "A baby was such a big part of our relationship, you would think ... I don't need to be the first one to know, but I should be in the Top 10 maybe. Somewhere around there."

Sensing things were "moving in a more negative direction" because they hadn't talked, Carter finally decided to "address this head on" and pulled Jenner aside for a one-on-one conversation. She began by laying out the similarities between Jenner and Brock -- joking, "I guess I have a type" -- before hoping there could be "harmony" between them all as a group.

"What's really going on Kait? Do you have ... a surprise for me? Just say how it is," he then asked. "Um ... based on everything everyone's been saying the last few days, I'm sure you gathered I'm pregnant," she replied ... before the episode came to an abrupt "To be continued" end.

A preview for next week showed Jenner was clearly concerned about how fast things were moving between Carter and Brock -- with him asking, "How well do you know this guy?" and noting he felt it was "a little too soon."