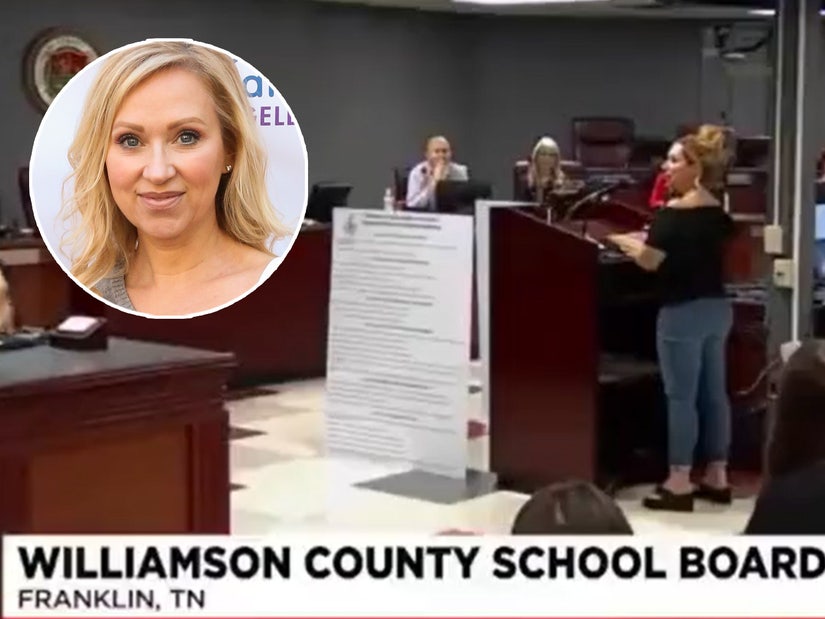 Jay Cutler has also taken a stance against the board's mask mandate ... while a nasty protest erupted after the school meeting.

This week in Franklin, Tennessee the school board reinstated a mask mandate for elementary school students -- and one star of "Good Luck Charlie" was among the angry parents protesting the move.

As children under the age of 12 continue to be ineligible for the Covid-19 vaccine, many schools are requiring masks as those who test positive for the delta variant keep growing in number. The CDC has also recommended wearing masks indoors for K-12 schools, regardless of the student's vaccination status. While Tennessee has no statewide policy, the Williamson County Board of Education approved one starting today and lasting until at least September 12, 2021.

And Leigh-Allyn Baker, who played matriarch Amy Duncan on the Disney Channel series, was not happy about it.

#GoodLuckCharlie star Leigh-Allyn is being criticized after speaking out against vaccines and mask mandates at a school board meeting. pic.twitter.com/28E7xSgYdo

"My name's Leigh-Allyn Baker and I'm a California refugee. I gave up everything there: a really successful Hollywood career, television shows, gave it all all up for freedom and to come to this friendly place in Tennessee and be greeted with open arms and I love it here," she said during Tuesday's meeting.

Claiming she has two children who have been hospitalized due to "all their immunizations" in the past, Baker said she was "granted a medical exemption" when it came to vaccinating her boys.

"My children are those rare children that will just not be able to get the vaccine and still I would never put them in a mask," she continued, "because their brain needs oxygen to grow, which the neurologists can confirm."

There is no evidence to support the claim that masks limits development, but that didn't slow down Baker's rant.

"Anyway, the real part of the clown show is that you all think that you actually have the authority to mandate this," she said, getting cheers from the crowd. "Because there are these books that I have, and I have them as a gift for you: the Constitution and the Declaration of Independence, the Bill of Rights and the Federalist Papers. Also, the Bible. And these guarantee my freedom and yours and our children's to breathe oxygen."

That statement was met with much applause and even a standing ovation. Her comments, however, clearly didn't make much of a difference, as the mandate stands.

Anti-mask demonstrators heckle masked people (some of whom are Drs/nurses) leaving 08/10/21 #Williamsoncountytn #schoolboardmeeting following one man to his car and shouting “we will find you” & “we know who you are” @WilliamsonHmPg 1/2 pic.twitter.com/u8wbdfr3Xj

Following the meeting, anti-mask protestors started going after those wearing them in the parking lot.

As one video from outside the meeting shows, the crowd began chanting, "Will not comply" and "No more masks!" before chasing down a few people going to their cars.

"We know who you are! No more masks! You can leave freely, but we can find you and we know who you are," two men started shouting at another person trying to leave. "You will never be allowed in public again!" they continued, as police did little to try and deescalate the situation.

Parents who don't want their children to wear masks for medical or religious reasons can fill out an "opt-out" form -- something Baker has urged others to do -- but it must still be approved by the school.

Baker seems to have the support of Jay Cutler as well, who has been tweeting about the Williamson School Board meeting and mask mandate all week form his newly-active, verified account.

Sharing a screen shot of an article about the call for masks before the meeting, he wrote, "Not this parent. Really hope I'm not put in the corner by Twitter in my first 24 hrs."

He's also been tweeting about possibly running for a position on the school board, saying his platform is "Common sense."

Both Cutler and ex-wife Kristin Cavallari have been open about their stance against vaccinating their children -- claiming on WWHL in 2014 that "there are very scary statistics out there regarding what is in vaccines" and explaining they "feel like we're making the best decision for our kids."