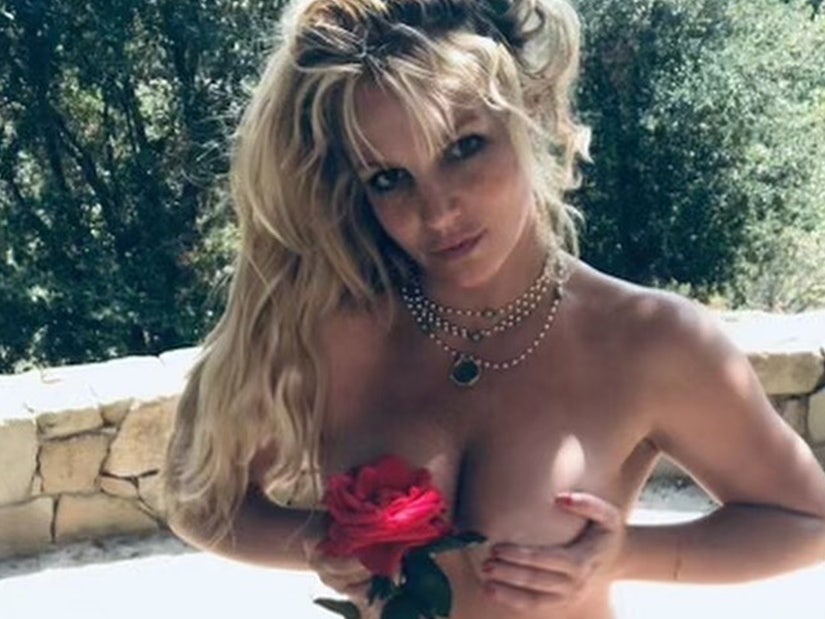 "I want you to understand my thoughts on exposing my skin," wrote Spears, while also denying any boob job or pregnancy rumors and thanking the #FreeBritney movement.

Britney Spears is free to wear -- or not wear -- whatever she wants.

In recent weeks, the singer has been sharing a number of topless photos to Instagram as public support for Spears over her ongoing conservatorship battle has grown, leaving many to wonder why she's suddenly showing so much skin.

On Monday evening, Britney herself answered that question -- sharing a number of new photos where she's rocking nothing but bikini bottoms and a hand bra while explaining how shedding her clothing has given her a new, "lighter" outlook on life amid her painful conservatorship fight.

"In my opinion it's quite twisted the immediate response of when any woman is hot and they want to shed a layer ... no ... I'm not talking in a strip club or a performance ... just on a practical scale of being in your car and realizing you're wearing a stupid long sleeve shirt in the summer!!!! The immediate reaction to any woman who does this after shedding a layer is DAMN I FEEL BETTER … therefore you think you look better!!!"

Noting that she's "had a billion shows" where she's stripped off some clothing and "felt great" despite not always "[looking] so great," Spears said performing in general made her "too self conscious about my body and that's not attractive."

"Anyways I bet you're wondering why I'd expose my body NOW … well it's because I was born into this world naked and I honestly feel like the weight of the would has been on my shoulders and it's made me view myself that way," she continued. "I wanted to see myself in a lighter way ... naked ... like the way I was born and to me looking back at my pictures when I shoot it's insane the psychology in seeing myself in my purest form gives evidence that pain ... hurt ... tears ... and heavy burdens aren't who I am."

"I am a woman ... a beautiful ... sensitive woman who needs to look at myself in my purest form," she continued. "No ... I'm not going to do topless pics for the rest of my life cause that would get boring but it sure as hell helps when you need to be enlightened."

She also noted that some of the #FreeBritney comments left under her recent topless photos have been "really f---ing funny," before going on to thank the movement for its support.

"The Free Britney campaign started with all your amazing pink Free Britney shirts 3 years ago!!!," she concluded. "There's a way deeper meaning to the movement than you can ever imagine … my fans have always been so damn amazing and I love you all 🌹🌹🌹 !!!! Psss this was shot on holy Sunday yesterday ✨ !!!!"

On the #FreeBritney front, on Thursday TMZ reports Jamie is ready to step down as her conservator, indicating he would do so "when the time is right" and intends to "with the Court and his daughter's new attorney to prepare for an orderly transition to a new conservator."

Spears has been under a conservatorship since 2008, with her father initially in control of both her personal and professional life. In June, amid the ongoing battle to oust her dad, Britney herself spoke out about the situation for the first time, during a blistering and heartbreaking 20-minute statement in court.