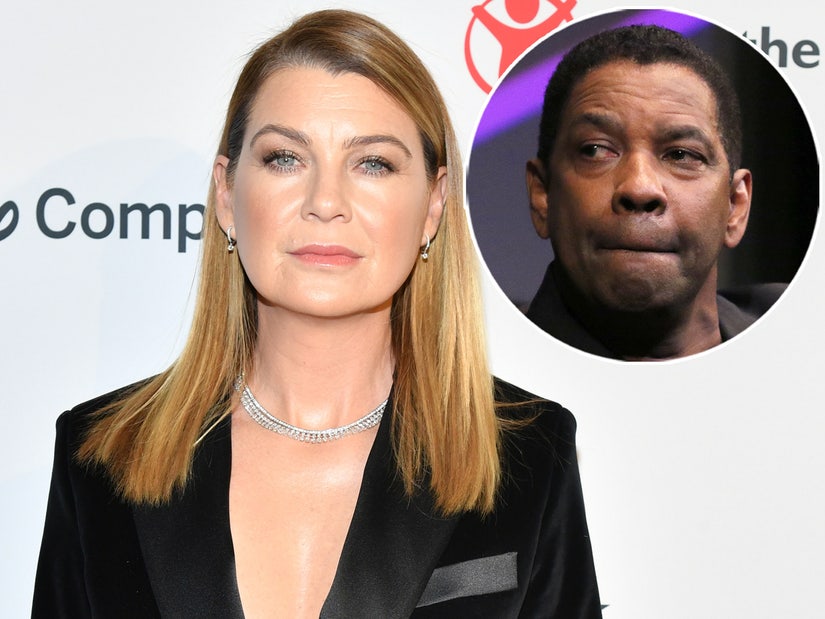 Twitter wasn't having it after Ellen claimed Denzel "went nuts" on her.

Ellen Pompeo was on the receiving end of some harsh -- and often hilarious -- backlash after she recently regaled her podcast audience with the tale of her nasty, alleged fight with Denzel Washington.

ICYMI, the actress said the two-time Oscar winner "went nuts" on her while he was guest directing an episode of "Grey's Anatomy."

After exclaiming that Denzel "doesn't know s--- about directing TV," she then claimed they went head-to-head after she told another actor to perform his lines differently. "Denzel went ham on my ass," she said. "He was like, 'I'm the director! Don't you tell him what to do!' I was like, 'Listen, motherf-----, this is my show! This is my set! Who are you telling -- You barely even know where the bathroom is!'"

Although Ellen would go to say she has the utmost respect for Denzel and the experience ended up being a great one, fans were left speechless -- or almost speechless -- at what they perceived as Ellen's audacity to slam one of the greats.

"Ellen Pompeo wasn’t just wildly rude to Denzel Washington on set, she confronted his wife when she came to visit. And the entire reason Denzel Washington was brought on as a director is that producer Debbie Allen was trying to appease Pompeo. Wow," author Saeed Jones summed up the incident.

Ellen Pompeo wasn’t just wildly rude to Denzel Washington on set, she confronted his wife when she came to visit. And the entire reason Denzel Washington was brought on as a director is that producer Debbie Allen was trying to appease Pompeo. Wow. https://t.co/eqaHBPu0P1

Ellen Pompeo really disrespected Denzel Washington and proudly told the world like we were gonna be on her side… pic.twitter.com/oZpmVoO6L4

“I was like, ‘Listen, motherf--ker, this is my show,'" Ellen continued. "This is my set. Who are you telling?" I wonder if she’d talk to Scorsese or Spielberg like that? https://t.co/QDaMTVtdn5

One critic tweeted, "Ellen Pompeo really disrespected Denzel Washington and proudly told the world like we were gonna be on her side…"

"I wonder if she'd talk to Scorsese or Spielberg like that?" asked journalist Tiffany Cross.

So far, Washington has not commented on her tale -- TooFab reached out to his rep yesterday for a statement -- but Twitter has plenty to say about about the alleged incident. Keep reading for more memes and reactions, below.

Denzel Washington: Ellen can you move slightly to the left..

Ellen Pompeo : DO YOU KNOW WHO TF I AM?! This is MY SET! THIS IS MY SHOW pic.twitter.com/zduokIDJ6A

I don’t know if Ellen Pompeo revealing that she yelled at Oscar Winning Denzel Washington on the set of Grey’s Anatomy is the flex she thought it would be. She seems like a Karen, and if I hear her say one more time she’s married to a Black man and has Black kids… pic.twitter.com/rYF3ivkx32

Denzel showing up to the set of Greys and not knowing or giving AF who Ellen Pompeo is....

Ellen: Mr Washington what can I do to make this scene better?
Denzel: pic.twitter.com/Mj8ZmJL0d6

So Ellen Pompeo tells Denzel Washington "Listen mother fcuker, this is my show" bc he said "Don't tell him that, I'm the director". Yet she says Denzel went nuts on HER? Y'all see how folks lie? She clearly went nuts on HIM. This is why Black folks film encounters with kherens. https://t.co/p8RZO4ODDX

denzel washington: can you say that line again it was a bit muffled

“Denzel we heard you got into it with Ellen Pompeo on set, care to comment?”

I'm just loling, Ellen Pompeo had the nerve to disrespect theee Denzel Washington and was brave enough to tell the world like we were gonna be like "aw you poor thing"? pic.twitter.com/ZUuitJ8YRm

Ellen Pompeo tried to pull a “work Karen” move on Denzel Washington by trying to “put him in his place” for being an uppity negro https://t.co/qzOis1KpHO