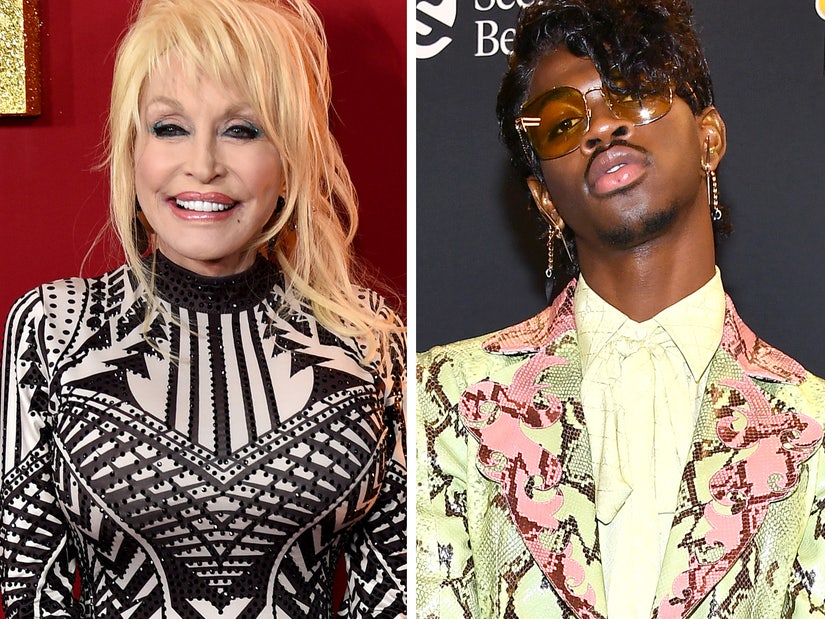 "I had to find it and listen to it immediately ..."

The country legend took to social media on Wednesday to share her reaction to the rapper's cover of her classic hit song "Jolene." As a part of BBC 1's Live Lounge series, the 22-year-old "Industry Baby" rapper performed his rendition of the iconic tune last week.

The rapper wore a white faux leather short sleeved button up and a diamond butterfly chain for the performance. On theme with the concept of his debut album "Montero," the set was decorated with wildflowers and X sang into a rhinestoned microphone.

"I was so excited when someone told me that Lil Nas X had done my song #Jolene," Parton tweeted out, sharing the rapper's original post with video of the performance. "I had to find it and listen to it immediately…and it's really good."

"Of course, I love him anyway. I was surprised and I'm honored and flattered," the 75-year-old country singer continued. "I hope he does good for both of us. Thank you @LilNasX."

On Instagram, Parton also posted a photo of the pair backstage at the 2019 CMA Awards with the same caption.

The "Industry Baby" rapper retweeted her shoutout with the words, "HOLY S--T."

In an interview with Andy Cohen on Sirius XM's "Andy Cohen Live" this week, he told the talk show host that he actually hadn't originally planned to sing "Jolene."

"We originally were going to do a Nirvana song and then like, we were kind of goofing around and you know, like doing 'Jolene', it was like, wait a minute. What if we actually did 'Jolene'?" Lil Nas X said.

He continued, "And I feel like, you know, the context to it, like completely changes as you just said, I was like, 'Oh, that'd be really cool.' So I went for it. Hey, [I] have like my history with country. So I was like, ah, this is perfect."

In a 2019 interview with Elle, Parton told the publication that she also had the opportunity to appear on the rapper's breakout song "Old Town Road." Although she declined the offer at the time, she was hopeful for the chance to work with him again on a different project.

"I had an opportunity to be part of that [song], but it had done so well with so many people," she said.

Lil Nas X released several remixes of the track including features from BTS, Billy Ray Cyrus, Lil Wayne, Diplo and others. "I thought, 'Well, I'll wait and do something later on. No point in going down that same Old Town Road. We got other roads to travel.'"

Fingers crossed for that collaboration ... soon!