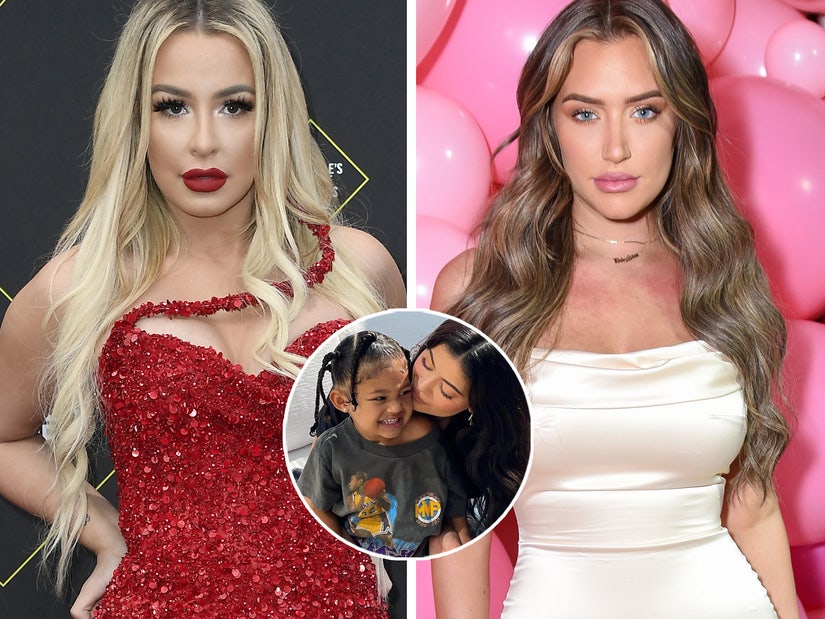 "proof i can just exist and get cancelled."

Tana Mongeau weighed in on the chatter surrounding her apparent cell phone wallpaper by saying people are taking it all too seriously.

In a statement received by TooFab from the vlogger,s manager, David Weintraub, Mongeau said "it's a funny viral meme. my friends and i all did it. people take things too seriously- proof i can just exist and get cancelled."

She then plugged her latest project, noting, "hence why my #1 podcast is called 'cancelled.'"

TooFab has reached out to Kylie Jenner's reps for comment but has not heard back.

On Thursday, the popular Kylie fan account, @kyliesnapchat, shared a photo that appeared to reveal that Tana's cell phone background is an image of Jenner's 3-year-old daughter Stormi.

In the photo of Tana -- which was seemingly taken at an event the YouTuber hosted for DJ Diablo on Wednesday -- she can be seen with her arms around "Shameless" actor Ethan Cutkosky as she held her phone in her hand. A closer look reveals that the phone's lock screen is a March 2020 photo of Stormi in the bathtub.

After @kyliesnapchat posted the photo, alongside the original shot of Stormi, Kylie's bestie Stassie -- as well as the KUWTK" star's other close friends Victoria Villarroel and Carter Gregory -- took to the post's comments section to weigh in.

"..this is weird," Stassie wrote, to which Victoria commented back, "very.." Carter also replied to Stassie's comment, writing, "I'm uncomfortable."

Many Instagram users also shared their thoughts in the comments -- and it looks like they are divided. While some appeared to agree with Kylie's pals, others came to Tana's defense.

"Idk as a parent if someone had my daughter as there [sic] wallpaper that was not even an acquaintance of mine I would be pretty creeped out," one user wrote.

On the other hand, some users didn't seem to think Tana possibly having Stormi as her cell phone wallpaper was a big deal and attributed to the fact that Tana is just a "big" fan of Kylie.

"She's a BIG Kylie Jenner fan. It was like a big deal to her when she met her and posted her. 😂😂😂😂" another wrote, while another said, "I don't understand why people are so weirded out. People who are fans of people have them as there [sic] background all the time."

Kylie, 24, follows the fan account, which has over 2 million followers. TooFab has reached out to Kylie and Tana's reps for comment but has yet to hear back.