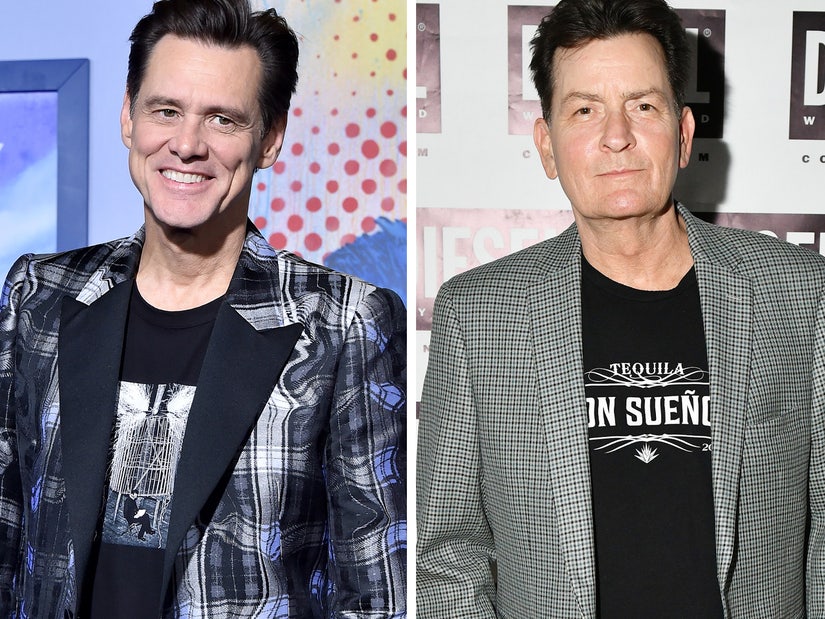 One star welcomed his youngest child just a few months before becoming a grandfather.

Not all grandparents are spending their days knitting and baking cookies anymore! And when it comes to grandparents who also happen to be celebrities, many of them still have thriving careers in Hollywood. In fact, there are quite a few stars you may not have even realized actually have grandchildren!

From reality stars like NeNe Leakes to actors like Kiefer Sutherland and Jim Carrey, these celebs are all proud grandparents to the newest additions to their family. And there’s no doubt that these little ones are getting totally spoiled by their famous grandparents!

Read on to find out which celebs already have grandchildren...

Former "Real Housewives" star NeNe Leakes became a grandmother at age 44 when her son Bryson welcomed a baby girl named Bri'asia. After initially being surprised by the news that she was going to be a grandparent, NeNe has been enjoying spoiling the little girl with everything from cute dresses to Gucci shoes.

“I always wanted to have a girl and now I have one! She’s just adorable. I paid for everything in the nursery: the clothing, the diapers. I don’t want her to feel strapped...We just love her,” NeNe told InTouch.

Jim Carrey became a grandfather in 2010 when his daughter Jane gave birth to a little boy named Jackson. Even though he's been a grandpa for a decade, Jim admits he gets a little embarrassed when Jackson calls him "grandpa" in public.

"I'm a good grandad. But it's a little embarrassing in public when he's just like, 'GRANDPA!' He doesn't hold back. But we're buddies. He's an awesome dude," Jim said on Lorraine.

Lauryn Hill became a grandmother at age 41 when her son Zion welcomed his first child, a little boy named Zephaniah. While the notoriously private musician doesn't often speak out about her private life, she clearly adores the little boy, whom she recently celebrated on his fourth birthday.

"We love you very much!! May you continue to grow in God's grace and peace and always know and feel that you are loved!!" Lauryn wrote on Instagram.

At age 57, Nicolas Cage already has four grandchildren through his son Weston. Nicolas says he's thriving in his role as a grandfather to Lucian, Sorin, Venice and Cyress — but only babysits on occasion!

"I love it. Every second," Nicolas told People.

It might be surprising to find out Eddie Murphy is a grandfather considering his partner gave birth to his youngest child just a few months before he became a grandpa for the first time.

"Yeah, my son had a daughter named Evie. She's five months old. And I have a new son that's 10 months old. My oldest son is 30, and my youngest child was 10 months old, and I got a new grandchild," he told Vanity Fair in 2020. "Things happen in cycles, and right now I'm in a cycle where there's no higher blessing than having a child. There's no sweeter blessing than seeing your grandchild. So right now I'm in a period of just raining blessings on me."

Kid Rock became a grandfather when he was just 46 and says that he feels grateful to be able to experience so many things with the little girl since he's still young.

"I'm enjoying it. Listen, my son graduated college and he has a job. That alone, as a parent, is such a relief. I can't imagine what the f--- I put my parents through. Now I have a beautiful granddaughter, on top of it? It's pretty crazy. My friends say, 'How lucky are you, to be able to see your granddaughter do so much stuff? You'll be at her wedding.' So many things you might not see if you have kids later in life, which seems to be the trend now for most responsible adults," he told Rolling Stone.

Catherine Zeta-Jones is already grandma to a little girl and a little boy at age 52. While she's technically a step-grandmother through her marriage to Michael Douglas, she loves her role as a doting grandparent.

"My name is ZeeZee. Michael is Bubba...We've all got funny quirky little names...She came out perfect and it’s just a joy as any new baby is," Catherine said on Live With Kelly and Ryan after the birth of her granddaughter.

Kiefer Sutherland became a grandfather for the first time at age 39 through his marriage to his first wife Camelia. The couple tied the knot when he was just 19 and he became a father figure to her eight-year-old daughter Michelle. She later welcomed two little boys, whom Kiefer says he loves to spoil.

"The wonderful thing about grandchildren is you give them back. So when they come to visit me, I've got my $5 and my $10 and I've got some chocolate and Coca-Colas and everything they're not supposed to have. I spend about two hours getting them completely wired, I give them cash so they’ll come back, and then I hand them back to their mother and say 'good luck,'" Kiefer joked.

Charlie Sheen became a grandfather at age 47 when his eldest daughter Cassandra gave birth to a baby girl named Luna. Although he was surprised at first, Charlie seems to absolutely love the little girl.

"It kinda blew my mind but what a gift," Charlie said of becoming a grandfather.

At 65, Whoopi Goldberg isn't just a grandma, she's actually a great grandmother! Whoopi became a great grandma when she was just 58 after her granddaughter welcomed her own daughter Charli. Whoopi says she's been enjoying getting to know the little girl as she gets older and can go on more adventures with her.

"She's now calling me by my name...We're starting to communicate. Babies are nice, I like them, but they don't do much!” Whoopi joked during an appearance on Rachael a few years after Charli was born.

Cee Lo Green became a grandfather at age 35 when his stepdaughter Sierra, welcomed a baby boy. While Cee Lo and Sierra's mother have split, he is still a doting grandfather to the little boy.

"It's a real tingly feeling to have someone recognize you so young as their own. I'm Papa to him. He knows I belong to him in that way, so that's sweet...He sung a little bit of 'Forget You' in the back seat. It's out of tune, of course, but it's cute,” Cee Lo told CNN.