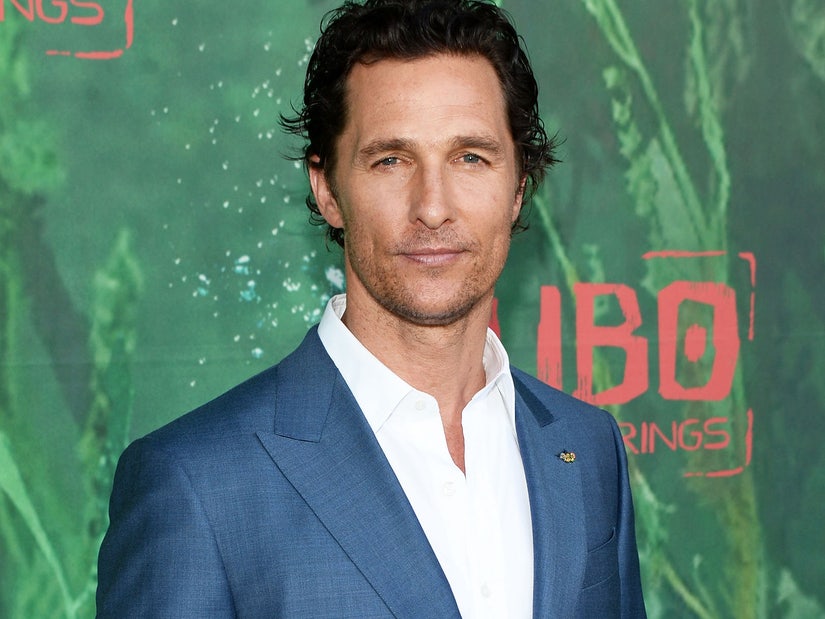 "What is NOT true, and insinuated with the clickbait headlines since, is that I am against vaccinating children at all."

Matthew McConaughey called out what he described as "click bait headlines" after his initial comments saying that he was against mandating vaccines for "the younger kids."

Taking to his Instagram Stories, McConaughey clarified his words, explaining that he was "referring specifically to the 5-11 year old mandate."

"What is NOT true, and insinuated with the click bait headlines since, is that I am against vaccinating kids at all," McConaughey wrote in his statement.

He further went on to say that his eldest son Levi, who is 13 years old, is fully vaccinated for Covid. 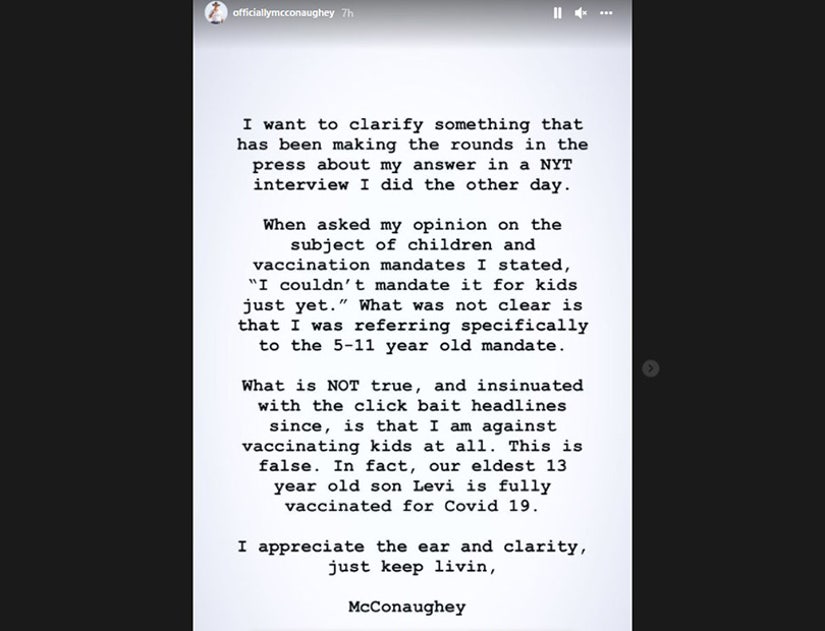 Matthew McConaughey can't get behind mandates for children.

Although the "Interstellar" actor has been vocal about wearing masks and testing regularly during the COVID 19 pandemic -- and is vaccinated himself -- the 52-year-old revealed that he doesn't believe children should be required to receive the vaccine. At least not yet.

Last week, the Food and Drug Administration approved the use of the Pfizer-BioTech vaccine for emergency use in children from ages 5 to 11.

But on Tuesday at the New York Times' DealBook Summit, McConaughey said that while he and wife Camila Alves got the shot, their children -- Levi, 13, Vida, 11 and Livingston, 8 -- have not.

"I couldn't mandate having to vaccinate the younger kids. I still want to find out more information," the actor said. "I'm vaccinated. My wife's vaccinated. I didn't do it because someone told me I had to — [I] chose to do it."

"Do I think that there's any kind of scam or conspiracy theory? Hell no," the Academy Award winner continued. "We all got to get off that narrative. There's not a conspiracy theory on the vaccines."

The 52-year-old told the New York Times that he simply wanted more information before considering the vaccine for his children -- adding, "Right now I'm not vaccinating mine, I'll tell you that."

McConaughey said he had "quarantined harder" than the rest of his friends and family since the start of the pandemic, and he and his family have been wearing masks and getting tested regularly.

"I'm in a position though where I can do that, and I understand that not everyone can do that," he admitted.

The US Surgeon General, Dr. Vivek Murthy, stressed to parents on Tuesday that it was absolutely necessary for children to get vaccinated after McConaughey’s statements regarding the mandates.

During an appearance on CNN’s Erin Burnett's "OutFront," Murthy stressed that parents needed to realize that "COVID is not harmless in our kids."

"Many kids have died. Sadly, hundreds of children -- thousands -- have been hospitalized, and as a dad of a child who has been hospitalized several years ago for another illness, I would never wish upon any parent they have a child that ends up in the hospital," continued the Surgeon General. "And the vaccines have shown in these trials for children 5 through 11 they are more at 90% effective in protecting our kids from symptomatic infection, and they are remarkably safe as well."