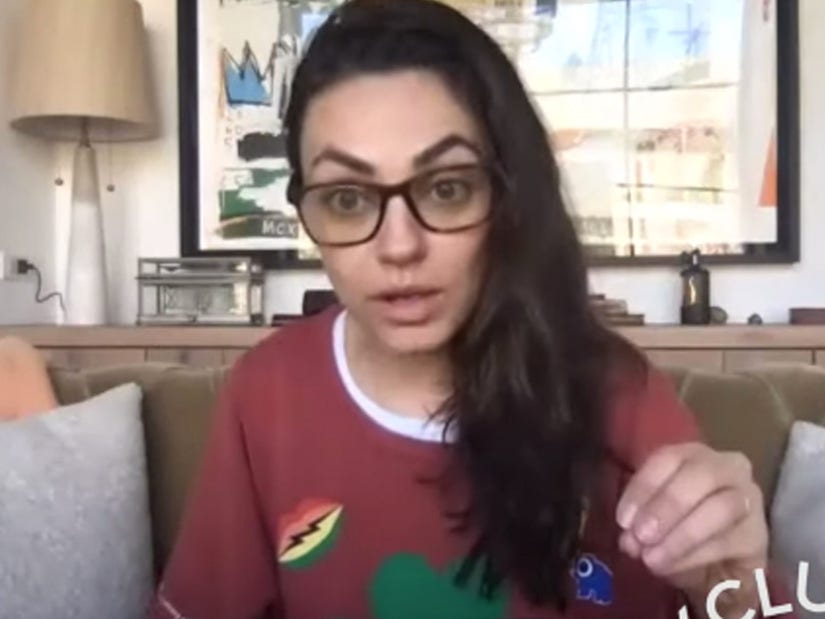 Kunis reveals why she used to tell people she was Russian -- and what she's telling her kids with Ashton Kutcher now about their heritage.

Mila Kunis is opening up about her Ukrainian roots in a new interview with Maria Shriver, sharing her outlook in the ongoing Russian invasion and newfound sense of pride she has in her homeland.

Kunis was born in the city of Chernivtsi in southwestern Ukraine in 1983, before she and her family immigrated to the United States when she was 7. She's been here ever since and, because she moved here so young, explained that she's always felt more "L.A." than Eastern European.

"I was born in Ukraine. I came to the States in 1991 with my family and we were the last of my family to migrate," she explains to Shriver in a preview clip from their upcoming Conversation Above the Noise interview for Maria's Sunday Paper newsletter. After sharing that many of her family members -- who were placed in concentration and worker camps during World War II -- "migrated around" after the war, Kunis said her family eventually moved to Los Angeles.

"And then this happens -- mind you, we have friends in Ukraine, Ash and I went and met with Zelensky three and a half years ago, I've been there, but I've always considered myself very much an American," she went on. "This happens and I can't express or explain what came over me, but all of a sudden I was like, 'Oh my God, I feel like a part of my heart just got ripped out.' It was the weirdest feeling."

Kunis said she still has a lot of friends in the area and has been checking in with them routinely.

She continued to talk about how an event like this has made her more in touch with and proud of her roots -- and has made sure her children with Ashton Kutcher, Wyatt and Dimitri, have embraced where they're from as well.

"It it a sense of pride and it's not taking away from loving where I live now and everything this country's given me, but it's been irrelevant to me that I come from Ukraine. It never mattered," she continued. "So much so that I've always said I'm Russian, right? Like I've always been, 'I'm from Russia' for a multitude of reasons."

"One of them being when I came to the States and told people I'm from Ukraine, the first question I would get is, 'Where's Ukraine?' Then I'd have to explain Ukraine, where it is on the map and thought, that's exhausting," Kunis explained. "But if I said, I'm from Russia, they'd say, 'Oh, we know that country.' Instantly, people were like, l know that red dot,. So I was like, great, I'll just tell people I'm from Russia. Well, hell no, I am from Ukraine. Everything's changed!"

Shriver ends the interview by asking Kunis what she would like for more people to know, understand or be open to about the unfolding situation. While she's from Ukraine, Kunis also wanted to make sure people were also expressing some sympathy for those in Russia who have nothing to do with and are against the ongoing invasion.

She also urged viewers to not get distracted by any shiny new causes -- or devote their entire existence to trying to solve this crisis either.

"I encourage people to not look at another problem tomorrow and find other issues or get distracted. I think we live in an incredible country, America specifically, where we're fine," she said. "Everybody's still going to concerts, movies and there's still award shows happening and I think that's okay. Life has to continue, life has to move on, we all have to do something in order to have purpose."

"But I do encourage people to stay on top of the news ... donate with your time, donate with your voice. Just get the word out ... it's not stopping anytime soon," she added, saying she also hoped people wouldn't start conflating the situation in Ukraine with other issues in the world.

Last week, Kunis and Kutcher announced the "Stand With Ukraine" GoFundMe campaign with a goal of raising $30 million for Flexport.org and Airbnb.org to help refugees flee their native country amid the conflict with Russia.

In an effort to bolster donations, Kunis and Kutcher have also pledged to match donations up to $3 million. So far, the cause has raised nearly $20,500,000.