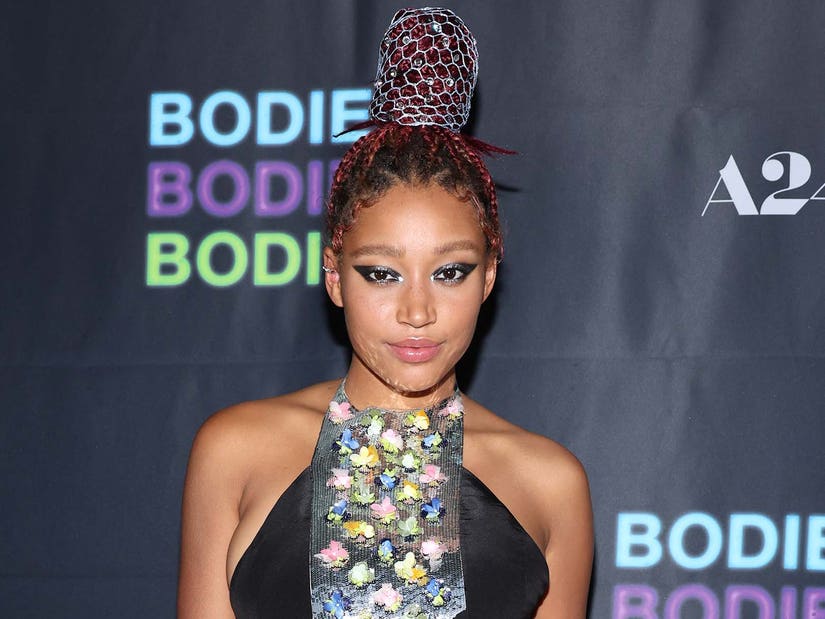 Amandla Stenberg doesn't want to hear your opinion on her body.

The 23-year-old "The Hate U Give" star commented on the media's "extreme" obsession with her chest after a New York Times review of her new slasher flick "Bodies Bodies Bodies" labeled the movie as "a 95-minute advertisement for cleavage."

Stenberg called out the NYT critic, Lena Wilson, who took to Twitter to publish the exchange.

"Great review," Amandla said via direct message. "Maybe if you had gotten your eyes off my tits, you could have watched the movie."

Accompanied with a screenshot, Wilson tweeted (mentioning other reviewers of the film), "Do you think she Instagram DM'd Alison Wilmore, Justin Chang and Anthony Lane like this or…"

“maybe if you had gotten ur eyes off my tits you could’ve watched the movie!” pic.twitter.com/vMCFgEUPcY

"Always weird when the homophobia is coming from inside the house but this is something," she added.

Amandla took to her Instagram Story to address Lena’s comments in a video. She noted that she was surprised the journalist called her homophobic for her message.

"I thought because Lena is gay-- I am also gay -- I thought as gay people we would both find [the message] funny. I was also curious to know what Lena would say to such a statement."

"It's quite surprising, but I guess it shouldn't be surprising at this point," she continued. "But the amount of commentary that I receive on my boobs is so extreme, and this has happened since I was a teenager."

"I can literally be wearing a T-shirt, and just because of the size of my boobs, there will be some sort of sexualization or commentary on my chest," Amandla noted.

“I do get tired of people talking about my chest ... you are allowed to have your criticism on my work and I’m allowed to have my criticisms of your work. I wish you the best.” pic.twitter.com/OkxEXWZMW1

The "Everything, Everything" actress admitted that she believed Wilson was making a commentary on the film's parent company, A24, attempting to sexualize her body thus exploiting her to make more profit.

"I understand the angle," Amandla confessed. "I can tell you that I wore this tank top in this movie because me and the costume designer thought that it fit the character well."

She noted, "And so, I do get tired of people talking about my chest. It seems to be in Hollywood, it's not normalized to have boobs that are above an A or a B cup. I've actually noticed this in my time as an actress. And so, there seems to be a lot of unwarranted conversation around my chest that just kind of baffles me."

"Lena, I thought your review was hilarious. I thought my DM was funny. I did not mean to harass you and I do not wish you any harm. You are allowed to have your criticisms on my work and I'm allowed to have my criticisms of your work, and that is A-OK with me. I wish you the best anyways. Thanks to anyone who has gone to see our 95-minute advertisement for cleavage," she concluded.

Meanwhile, Wilson also took to TikTok to defend her decision to share their text exchange.

"I am devastated to have received this message in the first place," she said. "I was a genuine huge fan of hers, but I'm posting it because I don't want this person who has more social power than me to think that it's okay to f--king do something like this."

She captioned the TikTok, "Unfathomably weird to get 'i don't want you in the locker room while i'm changing' bullying from a whole other lesbian."

Wilson also tweeted a follow up to her original tweet, per Yahoo!: "me: (spends one line of a 500-word review facetiously commenting on how A24 objectifies young women to sell content)" she wrote. "Random men on twitter dot com and also apparently amandla stenberg: Local D--e Cannot Stop Talking About Boobies."

Amandla then shared the tweet on her Story and simply responded, "I will change my bio to Local D--e Who Cannot Stop Talking About Boobies if you will?"