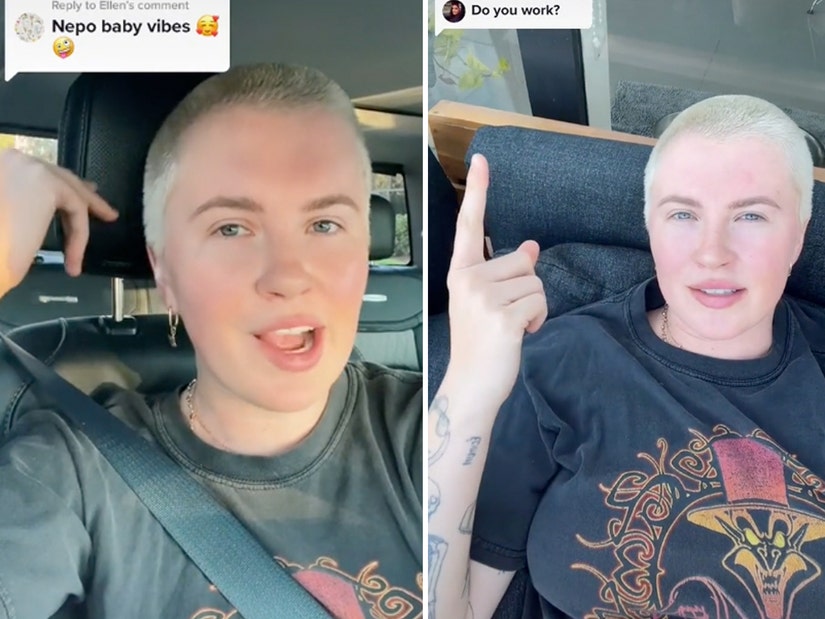 She also hit back at one follower who called her a "nepo baby" and revealed why living with her famous parents was "never an option."

Ireland Baldwin is assuring fans she's been putting in the work.

The 26-year-old daughter of Alec Baldwin and Kim Basinger took to TikTok to respond to a fan asking, "Do you work?" While Ireland said the commenter may have been genuine with the question, she added that one she gets all the time -- and often in a demeaning, passive-aggressive way.

"I am a business owner," she began, sharing that she and her boyfriend RAC are going into business. "We are opening up a café, wine bar and a boutique. And we are starting a brand together," she added.

Ireland noted that she's working to start her own animal rescue, saying that being a "foster rescue dog mom" is a big part of her life. "I work in adoption, I work with a lot of fosters and a lot of rescuers," she continued.

Among her projects, Baldwin added that she's a screenwriter and she and her friend recently started a production company together. "We pitch TV shows and we write movie scripts, we work on commercial stuff," she said, "Things are just kind of getting started for us. Everyone has to start somewhere."

In a follow up video, she was asked whether she's ever "worked an hourly job for hourly wages." Though she said it wasn't a typical 9-5, she pointed again to her work with rescue animals -- and said she actually worked for her famous mother doing just that growing up.

She added that she also worked at an ice cream store for bit, before taking on two retail jobs in high school as well. Baldwin, however, also started modeling at 17, until she went to film school and started to focus on screenwriting.

Another fan asked whether her "mega rich" parents give her a "monthly allowance," and while she said she does not, she acknowledged her privilege and said they definitely helped her.

"My parents have helped me so much of my life. They’ve made life a lot easier for me in comparison to a lot of people," she added. She also said living with her parents was never an option, adding that her mom shares her place with her boyfriend and the two are "living their life and doing their thing." As for her father, he "obviously has a lot of kids ... and I would never live on the East Coast anyway."

She added it would be "f---ing sick" if she did get an allowance though.

In one final video, she responded to someone who called her a "nepo baby."

"The only problem with being a nepotism baby is when you don't have self awareness," she said, saying it's vital to acknowledge your privilege.

"Nothing is worse than when someone is born into a famous family … and they fail to, like, acknowledge how these doors were opened for them and how they've had it a lot easier than other people," she said, saying there's also "a lot of painful s--- that comes with growing up in the spotlight."

Baldwin says she's made a life for herself that's entirely separate from her parents, adding that she's "very close" with her mom, while her dad has "his family" on the East Coast.

"I'm very separate from them," she said of both parents. "I'm not hanging around them waiting for them to get me opportunities and do things. I am my own person and do my own thing, and I know that's hard for you to maybe accept."