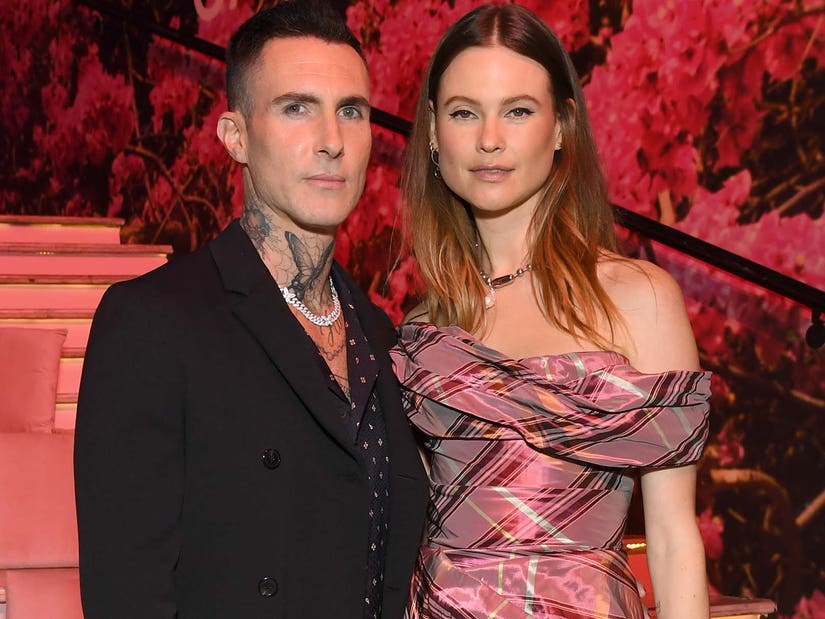 One star called him a "total pig," while another claimed he slid into their DMs too.

Hollywood is sounding off after Adam Levine was accused of cheating on wife Behati Prinsloo with Instagram model Sumner Stroh.

The "Sugar" singer spoke out against allegations he cheated on his wife of eight years on Tuesday, after Stroh accused him of an affair in a viral TikTok video earlier this week. Levine and Prinsloo share two children Dusty Rose, 6, and Gio Grace, 4; she's currently pregnant with their third child.

While the 23-year-old model claimed she and Levine had some kind of relationship, the Maroon 5 frontman said some of his interactions with other women simply "crossed the line."

"I used poor judgment in speaking with anyone other than my wife in ANY kind of flirtatious manner," he wrote in a statement to TMZ. "I did not have an affair, nevertheless."

"In certain instances it became inappropriate; I have addressed that and taken proactive steps to remedy this with my family. My wife and my family is all I care about in this world. To be this naive and stupid enough to risk the only thing that truly matters to me was the greatest mistake I could ever make," Adam concluded. "I will never make it again. I take full responsibility. We will get through it. And we will get through it together."

After the "She Will Be Loved" singer released his statement, stars took to their social media platforms to weigh in on the scandal -- with many still labeling him a "cheater," despite his denial.

On Friday, "Pitch Perfect" star Adam Devine poked fun at the fact that he and Levine have similar names, stressing that he's not Adam Levine. Sharing a photo of himself and his wife Chloe Bridges on Instagram, Devine wrote, "Just want to post this and say that my wife @chloebridges and I are doing great and going strong. I am not Adam Levine. He's a different guy and a worse singer."

Devine jokingly added, "We are however naming our future baby Sumner."

Meanwhile, on Tuesday, Chrishell Stause chimed in on the scandal on Twitter. "When apologizing for cheating publicly, I hate the we will get through it together part from a man," she fired off. "You've done enough."

When apologizing for cheating publicly I hate the -we will get through it together part from a man.

Also on Tuesday, YouTube star Tana Mongeau claimed Levine once slid into her DMs to relay a message he later unsent. "Check this one out ... he said unsent," she wrote, posting a screenshot of the alleged exchange on Twitter.

check this one out … he said unsend pic.twitter.com/Q0B2Svh4Kl

"Queer Eye" star Karamo Brown also commented on the power dynamics at play between a man of Levine's fame, stature and age, 43 to Sumner, 23, while appearing on the "Bevelations" podcast. While he did not absolve Stroh of any guilt, the television personality said Levine should have known better.

"You're a grown man. You’re a grown man in a relationship in your 40s," he said, before referencing an alleged exchange between Stroh and Levine where he asked to name the child he's expecting after her.

"It's one thing if you're having an affair and you've disrespected your wife in that way. The disrespect that got me was the baby naming."

WWE star Kayla Braxton slammed both Stroh and Levine, calling out the Instagram model for making the news public, instead of dealing with matters privately.

"Okay so Adam Levine is scum for what he did, but his mistresses claiming she was manipulated and playing victim ... girl," she tweeted. "He's been very publicly married for a very long time. Your video should have been an apology to his wife and kids, not an attempt to garner sympathy. Yikes."

Okay so Adam Levine is scum for what he did, but his mistresses claiming she was manipulated and playing victim … girl. He’s been very publicly married for a very long time. Your video should have been an apology to his wife and kids, not an attempt to garner sympathy. Yikes 😬

"Barely Famous" star Sara Foster also slammed Sumner. "Cheating is so gross," she said in a TikTok video in which she also referred to Levine as a "total pig."

"This woman who chose to make a viral TikTok video ... putting it out there for the world to see for a pregnant woman to see when she could have just messaged her privately ... We don't feel sorry for you," she continued. "You knew this man was married and you participated."

Model Emily Ratajkowski, meanwhile, defended Sumner in a response to Foster's video -- and criticized society's quick judgment towards women instead of married men.

"I don't understand why we continue to blame women for men's mistakes, especially when you're talking about 20-something-year-old women dealing with men in positions of power who are twice their age," she weighed in.

"Also, if you're the one in a relationship, you're the one obligated to be loyal so the whole other woman to blame, that's bad and it's literally designed to keep women apart."

Former "Bachelor" star Nick Viall shared the same sentiment as Ratajkowski, while also reiterating that the only victim is Prinsloo.

"Alright, some quick thoughts. One, and the most important one, is that the only victim here is Behati, Adam's wife. Like she doesn't deserve this," Viall said in a TikTok.

He continued, "Two, is that the only people responsible for protecting a relationship are the people in the relationship. If there was an affair here, it was because Adam chose to have an affair, not because this girl was a willing participant. If it wasn't going to be her, it would've been someone else."