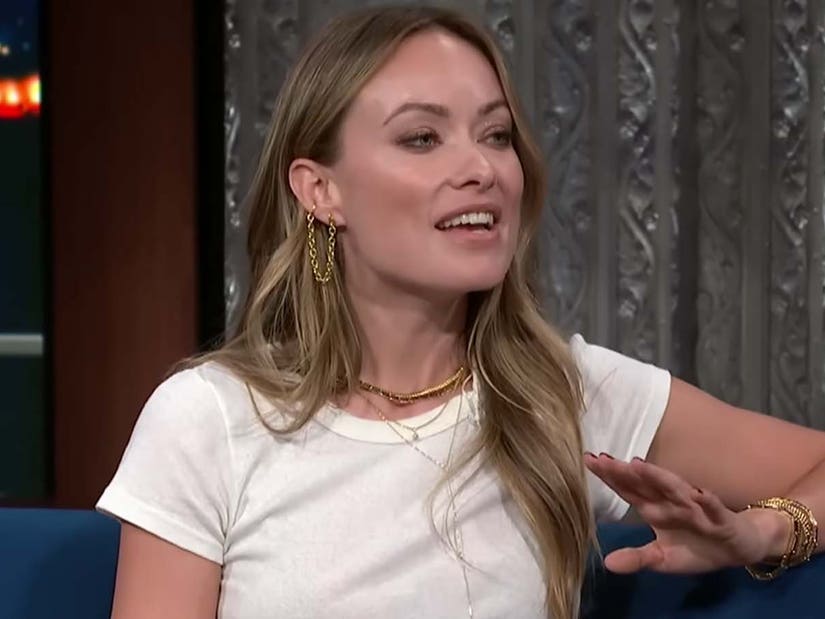 Olivia Wilde's daughter Daisy saw a new side of her mom while working together on the director/actress' new film, "Don't Worry Darling."

While appearing on "The Late Show with Stephen Colbert" earlier this week, Wilde -- who directed and also stars in the movie -- talked about her excitement about Daisy's role in the upcoming film. The 5-year-old, who she shares with ex-husband Jason Sudekis, also plays her kid in the movie.

"She was very good at playing my daughter," quipped Wilde.

"There are many funny lines of you yelling at your children off camera, going, 'Don't do that! Don't hit her.' Was that a natural way you would speak to your children?" Colbert asked.

"I was a little meaner in the movie than I would be to her," Wilde admitted. "It was like the drunk 1950s version of me I guess."

Olivia -- who also shares 8-year-old son Otis with Sudekis -- shared how it was "really great" to have one of her children join her on set and see her take command.

"I really loved that she was seeing me in that light," she explained. "Like somewhere subconsciously this is seeping in, that her mother is in charge and is supported by this awesome crew."

During her appearance on the show, she also took time to acknowledge various rumors of a feud between her and lead actress Florence Pugh, as well as the infamous "Spitgate" incident between Harry Styles and Chris Pine.

When asked about the rumored feud between her and Pugh, Wilde initially sidestepped that question and expertly pivoted to talking about "spitgate" instead. ICYMI, a clip from the film's Venice Film Festival premiere went viral as the internet debated whether or not Styles spit on his co-star. Somehow, this became not only a trending topic, but a mystery that demanded to be solved.

Well, Wilde was more than happy to oblige, telling Colbert that it did not happen. "But I think it’s a perfect example of, like, people will look for drama anywhere they can," she said.

She also alleged that people can see video evidence of something not happening and "they’ll still see what they want to see, and that is the creation of drama and that is clickbait."

"So no tension between you and Florence Pugh?" Colbert also asked Wilde, to which she insisted she had "nothing but respect" for her film's star, and that "there's nothing cooler than a busy actress. I have nothing against her for any reason."

"Don't Worry Darling" is out now.