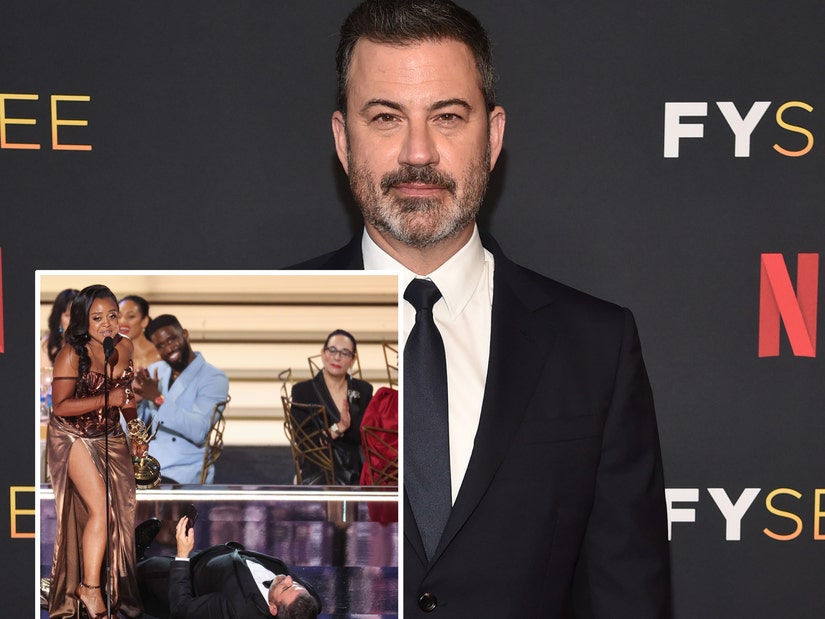 "It did take away -- especially afterward – because then she had to answer questions about [my prank] instead of just celebrating her Emmy," Kimmel told Howard Stern.

Jimmy Kimmel is shedding more light on the controversial prank he pulled at the 2022 Emmys.

If you recall, during the awards show earlier this month, Quinta Brunson -- the creator, writer, producer and star of "Abbott Elementary" -- won the Emmy for Outstanding Writing for a Comedy Series for the ABC sitcom, but had to take to the stage after (or actually during) an ongoing bit where Kimmel pretended to be drunk and passed out.

The joke was that he'd gotten plastered after his show lost again to John Oliver's "Last Week Tonight," so Will Arnett had to drag him out onto the stage. But as Brunson came up, Kimmel did not get up. Instead, Arnett dragged him slightly out of her way. The moment immediately went viral on social media, and not for any good reasons, with many believing that he stole from her moment. 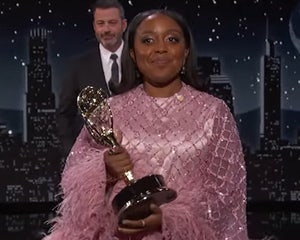 While appearing on Tuesday's episode of SiriusXM's "The Howard Stern Show," Kimmel, 54, shared more details about the incident, explaining how the prank came about -- and why it went wrong.

"I said, 'Will, wouldn't it be funny' -- because I know ['Jimmy Kimmel Live'] is going to lose to John Oliver -- 'if you could just drag me out there and say I was upset, and I had a few drinks, and I'm just kind of unconscious?'" he recalled to Stern, adding that the stage's layout was "very different" than he had anticipated.

"How I visualized this happening is he drags me out, we read the winner, and then I'm just basically just out of the shot, and it's not really a factor. But the stage was very different," he said. "The stage was like a catwalk. So, I was kind of like in the way."

Noting how some critics "read racial stuff" into it," Kimmel stressed that he had planned on doing the bit "no matter who" won the award.

The late-night host added that he and Brunson, whom he said "is a friend" of his, chatted backstage after her win, saying they had "no idea that anyone [was] upset," and didn't learn about the controversy until the afterparty.

However, Kimmel admitted that he ultimately stole some of Brunson's moment. "It did take away -- especially afterward -- because then she had to answer questions about [my prank] instead of just celebrating her Emmy," he said.

Following the incident, Kimmel apologized to Brunson and she crashed a "Jimmy Kimmel Live!" monologue. And not only are the two friends, but Kimmel said he's been a huge fan of "Abbot Elementary" long before it even premiered on ABC.

"Weirdly, coincidentally, when I saw the [‘Abbott Elementary’] pilot ... I called the head of ABC and said, 'This is a great show. This is the kind of show you should be making,’ and they also thought it was great and they intended to pick it up," he told Stern. "And then I reached out to Quinta -- this was months before the show premiered -- and told her how I felt about it."

"So it is interesting that it was this particular show."

Meanwhile, also during his appearance on "The Howard Stern Show," Kimmel gave his two cents about the infamous 2022 Oscars slap -- the moment in which Will Smith walked up on stage and slapped Chris Rock hard across the face following a "G.I. Jane" joke about Smith's wife Jada, who suffers from alopecia.

Since Kimmel has hosted the Oscars twice in the past, Stern brought up the subject, with Kimmel sharing how he would've handled the situation.

"I would've went right out on stage because somebody needed to go out there at that time," he said. "And I think that was one of the drawbacks of having three hosts -- it wasn't clear who should go out there and go handle it."

"I think I probably would have started talking to Will Smith, who was sitting there. I think I would've been like, 'What are you doing?' ... That would've been my first step,'" said Kimmel, who brought up how he hosted the 2017 Oscars, which famously featured the "La La Land"-"Moonlight" Best Picture mixup.

He also told Stern that he spoke to Rock "for about 90 minutes" about "six or seven days" after the slap, but said he didn't believe it's his place to reveal the details of the conversation.

"I don't want to share what he told me because I don't think it's my story to share ... but he was surprised by it," Kimmel said.