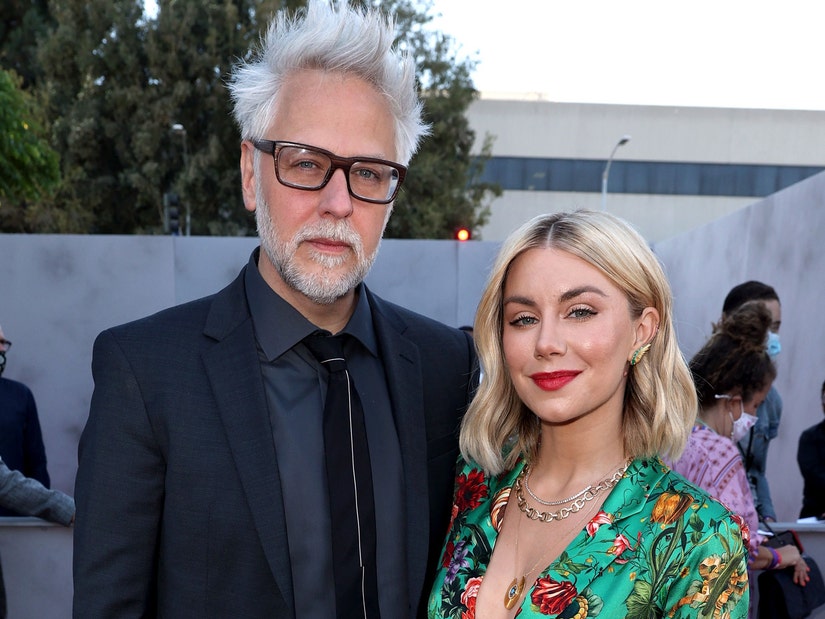 Congratulations are in order for filmmaker James Gunn and actress Jennifer Holland!

On Friday, Gunn, 56, announced on social media that he and Holland, 35, tied the knot over the previous weekend after seven years together. The "Guardians of the Galaxy" director and "Peacemaker" actress married in a star-studded ceremony at Dunbar Ranch in Aspen, Colorado.

The couple -- who became engaged in February 2022 -- shared a series of photos and videos from their special day on social media.

Alongside an Instagram post that featured shots from the wedding weekend, Gunn wrote in part, "After over 7 years together, I finally married the love of my life, @jenniferlholland. What an incredible, beautiful, stunning day surrounded by the most wonderful family and friends in the world."

Similarly, Holland -- who wore a gorgeous Alexander McQueen gown -- posted a carousel of photos from the wedding on Instagram. "James! Thank you for sharing your love, life and family with me. Thank you for choosing me, for elevating me, and for always making me belly laugh. Here's to many more years to follow the first extraordinary 7," she wrote in part. "@jamesgunn and I got married surrounded by the most beautiful humans, the most magical scenery, and endless love and laughter. My gratitude is bursting at the seams."

Meanwhile, Gunn posted a lengthy thread on Twitter, in which he shared more details about the festivities.

He revealed a large animal made an appearance at the start of the nuptials, hilariously noting that "Scooby-Doo" star Matthew Lillard provided some commentary to the surprise guest. "A moose interrupted the beginning of the ceremony! For those who don’t know, moose are the most dangerous wild mammals in North America," Gunn tweeted alongside a video of guests in their seats with the moose in the background. "But the big dude just wandered by. @MatthewLillard yelled out, 'It's James' Dad!'"

Gunn also posted about the wedding party, revealing that his brother Sean Gunn officiated the ceremony. "I was lucky to have my brother @seangunn (who battled through altitude sickness) as the officiant. He killed it," he tweeted.

The "Peacemaker" creator also shared that Funko made adorable, custom Funko Pop cake toppers for his and Holland's wedding cake.

Meanwhile, several stars from "Guardians of the Galaxy," "The Suicide Squad" and "Peacemaker" attended the nuptials, including Chris Pratt, John Cena, Zoe Saldana, Nathan Fillion, Karen Gillan and Michael Rooker. "And of course, being joined at our wedding by our #GotG, #TheSuicideSquad & #Peacemaker families made things all that much sweeter," Gunn tweeted alongside black-and-white group photos of him and Holland posing with the franchise's stars.

The fact that Gunn has worked with both Marvel and DC Comics was celebrated during the wedding weekend through a "big Marvel Vs DC softball game with jerseys and everything." Gunn noted that Rooker "played on both teams" as he's starred in both Marvel's "GOTG" and DC's "The Suicide Squad."

See more from the couple's nuptials in Gunn's posts, below!

This weekend I was lucky enough to marry my best friend & the love of my life, @jennlholland. ❤️ pic.twitter.com/eZlj4JcYQn

We got married here in Aspen, Colorado at Dunbar Ranch. A moose interrupted the beginning of the ceremony! For those who don’t know, moose are the most dangerous wild mammals in North America. But the big dude just wandered by. @MatthewLillard yelled out, “It’s James’ Dad!” 😭❤️ pic.twitter.com/yz3QEPZACJ

I was lucky to have my brother @seangunn (who battled through altitude sickness) as the officiant. He killed it. Our bridesmaids & groomsmen were awesome. Jenn’s Matron-of-Honor was my sister Beth & my best man was Stevie Blackehart. Jenn’s brother Bill walked her down the aisle. pic.twitter.com/RkuyQU57xT

Thanks to @OriginalFunko for our cake toppers! They matched my tux and Jenn’s gown perfectly - in fact they did such a great job, Jenn wouldn’t let me see her Funko before the wedding! pic.twitter.com/RcZUnv5d6K

The day after the wedding we played games out in the Field of Dreams at Dunbar Ranch. We had a big Marvel Vs DC softball game with jerseys and everything. @RookerOnline played on both teams! pic.twitter.com/4xMiW4qzus

I can’t begin to thank all the amazing people who helped us. I don’t have all their Twitter handles, but check my IG for links. But a special thanks to @EKSEVENTS for putting it all together & to @JMarlowPhotos & Jess Miglio for the photography. pic.twitter.com/bmHdV6BlXq

Gunn and Holland began dating in 2015 after meeting through "Smallville" star Michael Rosenbaum, a mutual friend.

The two became engaged in February 2022, with Gunn revealing the news by sharing a photo of Holland rocking a stunning engagement ring. "😏❤️," he simply captioned the Instagram post at the time.

Gunn was previously married to "The Office" star Jenna Fischer. The two tied the knot in 2000, before splitting several years later in 2007. Their divorce was finalized in 2008.