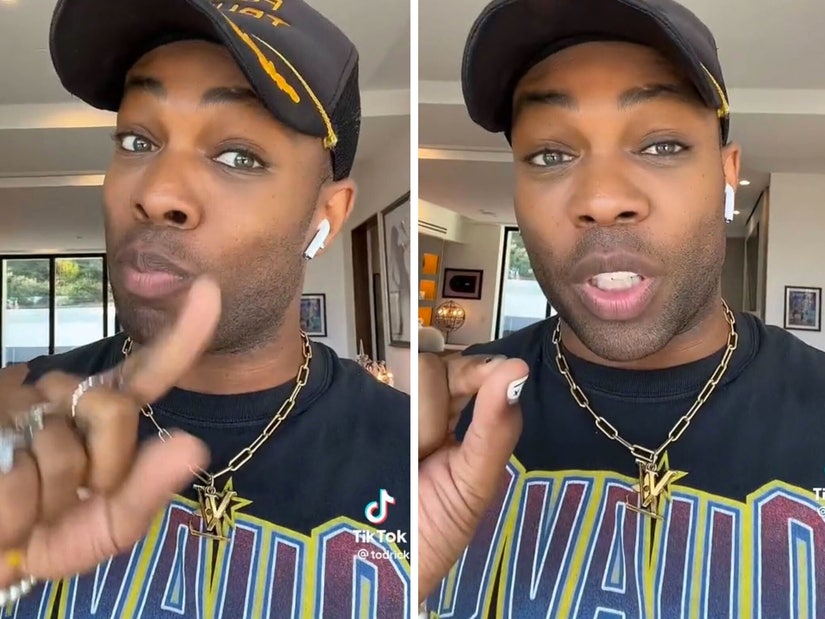 Hall says he wishes "people who have never met me would stop talking s---" online, before addressing his behavior on Celebrity Big Brother.

Todrick Hall just went off on TikTok, pushing back against those who criticized his gameplay on "Celebrity Big Brother" and other online reports about his alleged behavior off the show as well.

The fiery response came after another TikTok user and reality TV podcaster named Abigail Adams posted a video in which she said she wished other "Big Brother contestants would stop hanging out with Todrick after their seasons because he is not a nice person."

Hall has been a longtime "Big Brother" fan, hosting parties and gatherings with the show's contestants at his home after their seasons wrap. Some have even stayed at his house for extended periods of time, something Adams found puzzling.

As evidence against Hall, she pointed to a few moments from his time on "Celebrity Big Brother" which made headlines when it aired -- including how he seemingly weaponized a traumatic moment from Shanna Moakler's past to taunt her after she was eliminated and brought up Chris Kirkpatrick's children during another heated moment. She also criticized him for admitting to half-assing some of his videos on Cameo and brought up reports he has unpaid rent on his new home -- something he was just ordered to pay in September.

"I really wish that people who have never met me would stop talking s--- about me on the Internet," Hall said in a response video to Adams. "Like, the audacity that you would feel comfortable enough to post a video about a perfect stranger publicly to anybody who can see it to declare that this person you have never met or breathed the same air as is not a nice person, which is a pretty ballsy statement I might add, to increase your likes, your popularity and to start a witch hunt against this person who is a human being and has family and friends who see this f---ing bulls--- that you post would, in some people's opinions, make you not a nice person Ms. Thing."

"This may come as a newsflash to some of you people, but reality TV is far from real and you can't judge a person's moral and ethic compass based on a social experiment where they are pushed to their limits, forced to live in situations that are pretty much unlivable with perfect strangers and decide that that is who that person is 24/7 hours of the day," he continued.

"I don't think that's fair and I don't think there's anyone watching this who doesn't have skeletons in their closet and who wouldn't be ashamed of some of the things they might have said since the day they were born," he added, before talking more generally about some of the backlash and criticism he's faced through the years.

Saying that there's "3 sides to every story," he then addressed some of the specific criticisms aimed at him during his time on "Celebrity Big Brother." On the show, Moakler reportedly shared that a home invader once told her, "Don't be too hard on me now" in one of the scariest moments of her life. When she was evicted, Hall repeated that same exact phrase to her on her way out the door.

"The comment I said to Shanna was never about a home intruder. My house was broken into, I would never make a joke about that," he said. "It was about an ex boyfriend. Still not nice, but not the facts that you're telling people."

Of his repetitive Cameos, he admitted that once he started making so many of them, the videos stopped being "the most original." He then addressed Adams and added, "if that makes me a bad person, I'm sorry, you let me know when you're famous and you're making 10,000 Cameo videos how original each one of yours are."

"At the end of the day, yes I've made mistakes, I've owned up to that, I'm not a perfect human. But I'm not gonna sit around and let people tear me down," he said, before concluding with a warning. "I have fans too and up until now I have not unleashed my fans on anybody, but you're about to find out exactly how my fans feel about you bullying me."

In his caption for his video, he added that he was going to follow Adams and attempt to "have a mature adult discussion" with her. He also said that if she's really a fan of Big Brother, she should be happy he's given some of the contestants "a safe space to stay" at his home.

"And unless you have a place for them to crash at then kindly STOP TALKIN S---! I'm literally being a nice person now by letting them live at my place while I was OUT OF THE COUNTRY, not even here!" he added. "We've got to stop allowing people to just run wild with peoples names and reputations. This is my real life, not a place for you to get clicks at my expense. If you're actually seeking the truth we can speak to each other, I'll give you my number and we can talk. I'm willing to make this right but me and my fans aren't taking this s--- anymore. Check your comments! They will let you know."

Adams seemed pretty shocked by his reaction in a pair of videos she later posted to her page, responding to his post.

"I was not bullying you. I was simply calling you out for not being a nice person. That's not bullying, that's just criticism," she said. "I only reported what I found in media reports and shared my opinion."

"If you wanna suggest that I embarrassed you in public, that is far from the truth. You did that to yourself when you went on Celebrity Big Brother," she added, before saying what he was doing by posting his video to his +1 million fans was actually "bullying" her.

"He did the same exact thing with a video about me ... in front of his million followers," she said, adding that if he truly was "interested in reaching out to me and having an honest conversation," she looked forward "to hearing from you soon."

After re-sharing his video to his Instagram page, Hall's comments were flooded with supportive messages from a few famous friends -- including "Big Brother" alum Kyland Young.

"Funny how it's always people who don't know and haven't really interacted with you that seem to be the loudest voices criticizing," wrote Young. "Also, I think your choice to respond to someone trying to tear you down by not reciprocating insults but instead extending some understanding & grace, even saying 'I'm sure you're lovely and sweet' –words I hope so badly others can know are NOT said with sarcasm, but something you genuinely mean – is a pretty clear display of your heart."

Daniel Durston, who competed on the most recent season of BB, added, "'Not a nice person' IM DEAD. Because you are one of the sweetest most wholesome people I've ever met. You don't owe anyone a damn explanation or response, love you."