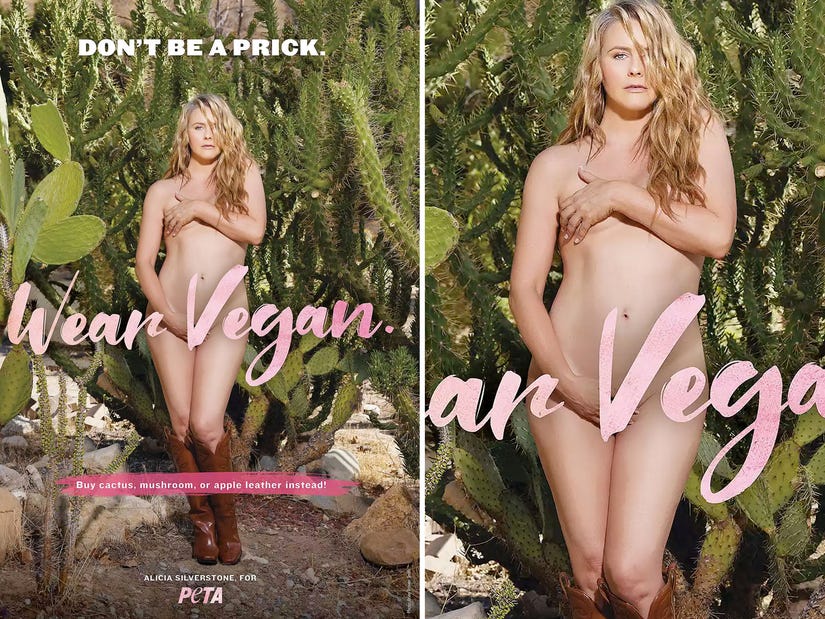 Alicia Silverstone is stripping for a good cause.

The 46-year-old "Clueless" star once again gets totally nude for a new campaign with PETA, after previously posing in the buff for the organization numerous times in the past to promote going vegan and speak out against wearing wool.

This time, she's pushing back against the leather industry, while calling for designers and customers to look for earth-friendly alternatives like mushroom, cactus and apple leather instead. "Don't be a prick, wear vegan," reads the ad, which was inspired by the cactus alternative.

"If it takes me getting naked for you to care about animals then that is what I'm after. Today I'm doing a photoshoot with PETA," Silverstone, a Vegan herself since 1999, explains in a video from the  shoot. "I never, ever, get naked in TV, in film, nothing, never, nope — but I've done it for PETA because that's how much it matters to me."

"The amount of resources, water, food, oil for transport, the amount of energy that goes into making leather is extraordinary. It's just not sustainable. The Earth can't handle it," she continued. "I have found really good materials that are natural. They're using mushroom leather, pineapple leather, cactus leather ... My dream is to get these earth-friendly, vegan materials into the hands of the greatest designers."

"I'd rather go naked than wear animals," she added, calling for viewers to be "conscious of the earth because we all have to live in it."

Her 29-foot ad goes up today in Times Square, at the intersection of 40th Street and Eighth Avenue.

Silverstone first posed nude for PETA back in 2007, for a campaign about being vegan. She did it again in 2017 for a "I'd Rather Go Naked Than Wear Wool" campaign.