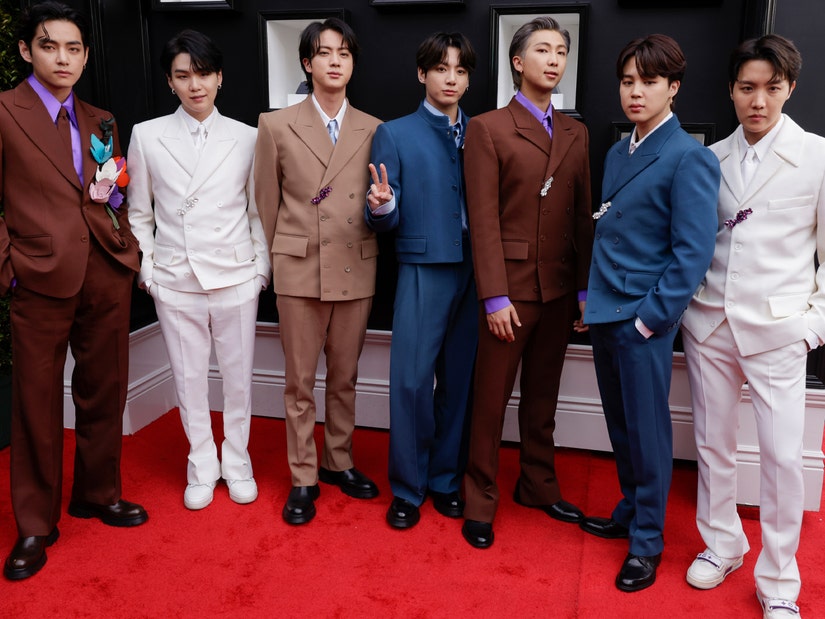 While currently on hiatus, BTS is still one of the biggest boy bands in the world. The group has not only stolen the hearts of regular fans, but also celebrities as many A-listers don't skip the opportunity to meet them.

From Chrissy Teigen meeting BTS at the Grammys to the Backstreet Boys linking up with the K-Pop stars at the Billboard Music Awards -- here are 21 iconic BTS-celebrity moments.

BTS has been a fan of John Legend for years, and the affection from Legend and his wife Chrissy Teigen is likewise. Legend first met the band back in 2019 as the boys excitedly posted a photo with him on their Twitter with the caption, "Legend!!." They then reunited three years later at the Grammys and met Chrissy, who posted on her Instagram, "actual BTS I die."

The self-proclaimed "certified hot girl" Megan Thee Stallion has grown quite a close relationship with BTS after being featured on the remix of their song, "Butter." She posted adorable pictures of the band on Twitter -- see below -- but countless photos of Megan and the boys can be found on the internet, including shots of the rapper and boy band performing as well as goofing off and taking selfies.

Lizzo and BTS broke the internet with these adorable selfies of them at the Grammys this past April.

Jojo Siwa also had to hop on the BTS selfie train. The "Dance Moms" star later posted a selfie of her and the band members on social media.

can you see how happy i am 😭😭@BTS_twt pic.twitter.com/KQtypPUSJl

Winnie Harlow also flexed on her Twitter that she met the "Butter" singers at the 2021 AMAs.

A lil @AMAs Behind The Scenes @bts_bighit 🧈 pic.twitter.com/KpALuBrqCz

BTS was definitely a hot guest at the AMAS as "Black-ish" star Marsai Martin also posed for a pic with them.

Talk about when two powers cross. BTS hung out with major band Coldplay at the 2021 AMAs red carpet. This was not the first time the two groups have met as they have recorded the track "My Universe."

the My Universe Crew 😄@coldplay pic.twitter.com/oNArgqYzoO

Becky G has been pals with BTS for a while. She posted a current and throwback photo this past November, calling the band "her homies." Becky G and band member J-Hope have even recorded a song together called "Chicken Noodle Soup."

Halsey is another artist who can claim she’s worked with the iconic band. She is featured on their track "Boy With Luv" and fans adore the relationship between the "Bad at Love" singer and the band. Check out this photo post-performance from 2021.

In the early days of BTS making it huge in America, they got a photo with THE Taylor Swift. She told them "they were killing it" and wished them well, how iconic.

Also in 2018, Rebel Wilson got a photo with the boys at the Billboard Music Awards.

Both Arianators and BTS army lost it in 2018 when Ariana shared that Jungkook was a special guest at her concert. She even had to confirm that the photo was real and not photoshopped.

Throwback to 3 years ago today, Ariana Grande posted her photo with Jungkook on Instagram. She also made it her lockscreen and shared on IG story. pic.twitter.com/nupxsvLKDf

Ansel Elgort is known as one of the original American BTS fanboys. Whenever they performed, you could always find him in the crowd grinning ear to ear just like he is in this photo.

Because who doesn’t wanna see Augustis Waters as the 8th member of Bangtan 🤪 pic.twitter.com/eC92hL8i58

The British singer posed with BTS back in 2017, joking she was now the 8th member of the band.

first day as the newest member of @BTS_twt. love u guys 💕🇰🇷💕🇰🇷 pic.twitter.com/EyUOWxfBl5

Khalid came to visit the Bangtan Boys when they performed at the Rose Bowl in LA last December.

DJ Marshmello also posed with the band on the red carpet when he met them back in 2017.

Happy I got to meet @BTS_twt 🙏🏼 pic.twitter.com/5uifOPCDJP

Laura Marano had the opportunity to interview the band back in 2017, and ever since has always been excited to see the K-pop sensation whether they are on the red carpet or on stage.

Okay imma post more tomorrow, but I gotta say, im so flipping proud of @BTS_twt tonight at the #AMAs you guys literally rocked it so much 😭😭😭 @AJGibson pic.twitter.com/hKxFcu6oyA

Charlie Puth has had a relationship with BTS for about 5 years. Fans created rumors that there was tension between the "See You Again" artist and Korean band. However, multiple photos can be found of them together, including this cover art from Charlie and Jungkook’s latest project, "Left and Right" promptly shutting any negative theories down.