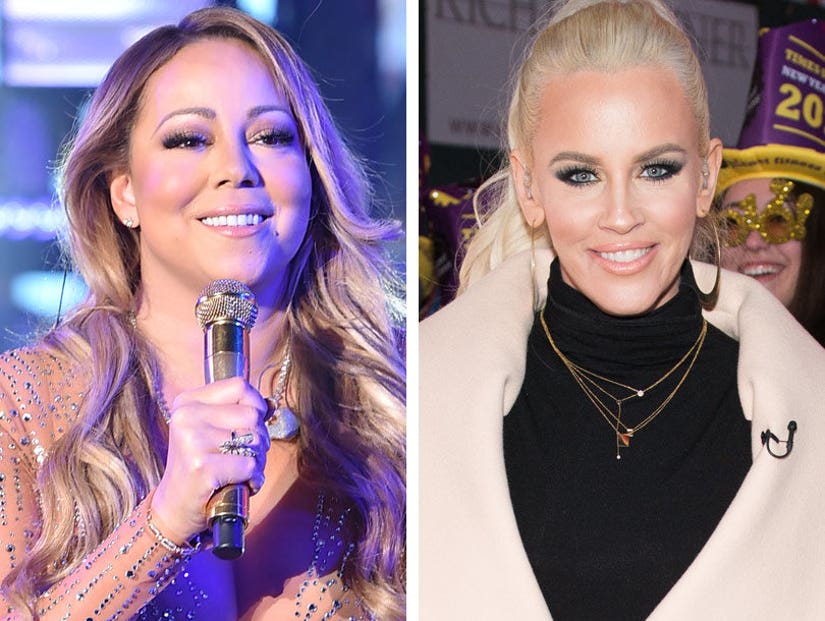 Jenny McCarthy has made it clear that she is "Team Dick Clark" in the nasty battle between "Rockin' Eve" producers and Mariah Carey over her disastrous New Year's Eve performance.

"It was so bad," McCarthy said of the performance, which was a allegedly plagued by audio issues. "And then, for a moment, I said,'Take a step back Jenny and try to find some empathy right now' and I did. I felt really bad for her because it was that bad, it was a complete trainwreck. Being in this business, I know what it's like to have your prompter go out, I know what it's like to have your inner ears go out, it's scary."

But McCarthy's sympathy for Carey quickly disappeared once the singer's camp went after Dick Clark Productions in the press.

"My sympathy stopped however, the moment she accused Dick Clark Productions of sabotaging her performance," said McCarthy. "Now I do understand our egos of course want to blame everyone but itself for mistakes. Let me tell you something, if Dick Clark were alive today, I guarantee he would be on air right now fighting back. He's not, so I'm going to."

"It's completely unfair and bulls–t for her to blame DCP," the talk show host added. "I think Mariah was nervous as hell. I think she chose really tough songs to try to sing along with. I think 'Emotions,' that song, I mean her voice is not there anymore. I don't believe there is a problem with her inner ears. I just don't. I think she used it as an excuse."

"She did whatever you would call a dance move rehearsal, holding her gold microphone, and she stood off to the side of the stage while she had a stand-in do a sound check," she alleged.

McCarthy's husband, New Kids on the Block star Donnie Wahlberg, got in on the Mariah bashing as well.

"The bucks stops with the artist. If you're gonna be a boss, a diva, you know it's your name, your face and your legacy on the line," he added. "The music track missing a vocal, that's on her. No rehearsal, that's on her."

He added that the entire debacle was the "perfect end of a year of no one taking accountability" -- and said it's "just screwed up" for Carey to blame anyone but herself.

For what it's worth, Andy Cohen also tweeted about the performance on Tuesday, siding with Team Carey.

Had an epiphany about Mariah last night. I'd seen her perform both those songs (in full voice) at the Beacon two weeks before..(Cont)

So after doing 8-10 shows at the Beacon where those songs were fully rehearsed, how would she suddenly be unable to perform them? (Cont)

Which leads me to believe that she really was having audio issues. That's my thought. She's been doing this forever. She was ready.