Scheana and Ariana are back to being friends, Katie spent 18 bucks PER wedding invite, Tom Squared visited Joe Simpson, and Jax went to Church. Ah, must be a Monday night on "Vanderpump Rules."

“When I get my photo taken, I feel like it's giving my soul life,” Tom Sandoval said during a very bizarre photo shoot at Joe Simpson's house. (Yes, as in Jessica Simpson's dad.) Tom Schwartz was there, too...because where else would he be. 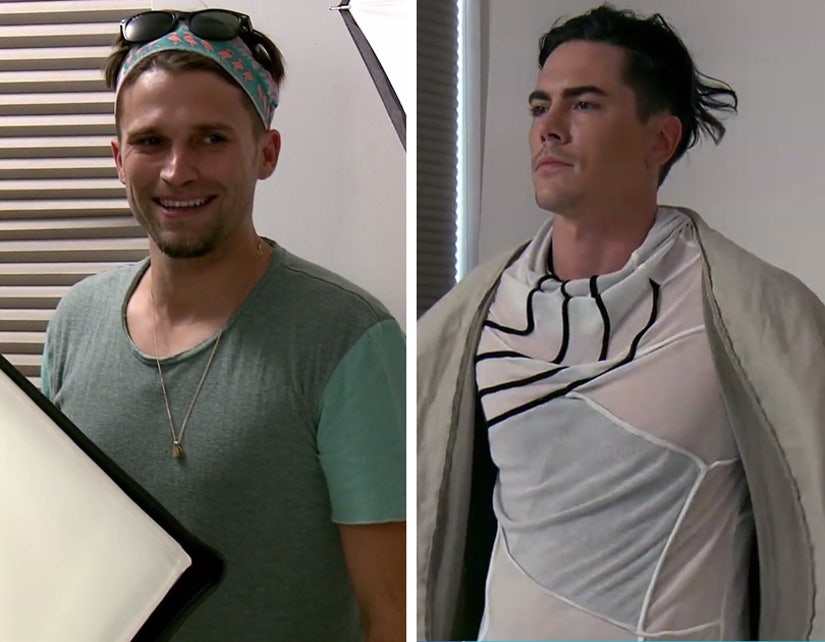 Then we have James Kennedy, who got cornered last episode by the girl he “didn't sleep with” (who happened to have a photo of them two in bed). Last night, we had the pleasure of feeling like the most intelligent people on earth after watching a downright painful exchange between James and his current girlfriend, Raquel. Let's just say they're made for each other. But we'll cut James a break. After all, he's a newly sober DJ trying to make it in L.A.

Stassi Schroeder won daughter of the year after traveling to Lake Arrowhead to visit her mom while she recuperates from a hysterectomy. Stassi even made her mom breakfast! Apparently, “one should never underestimate the healing powers of raw cookie dough.” (This is why Stassi is everyone's spirit animal.)

But nothing compares to Stassi's mini heart-to-heart with her kid brother, Nikolai. He gave a crying/heartbroken Stassi some encouraging words post-breakup from Patrick: “Life's tough, man, especially in your 20s.”

The boys (Ariana Madix included) decided the only proper way to celebrate Tom the groom was to dress in drag and get utterly wasted, so Jax and Sandoval took a trip to Lisa's closet. Sandoval ended up in a pink bra, and the rest is history.

The good news is that Katie and Scheana made up, but the bad news is that they made for a pretty dramatic brunch at Pandora's gorgeous mansion. It all started when Scheana brought up bachelorette party budget battles to Katie, then Katie sent Scheana angry drunk texts. Scheana cried, Katie cried. Hug, hug, hug. Sangria all around.

Katie then stormed off in an Uber, leaving Tom to finish the remaining fries and pay the bill. Ouch.

Up next: Bachelor/bachelorette party in New Orleans.