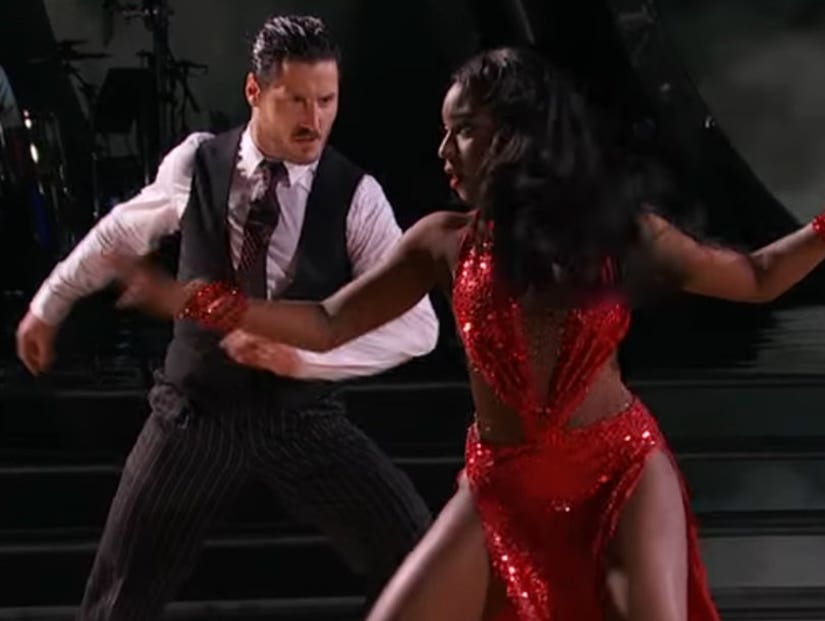 I spent nearly a decade of my life sweating and bleeding to the music as a dancer, all for this moment.: armchair judging a dance competition. From a young boy learning a shuffle-ball-change to performing with the St. Louis Ballet Company, I experienced the ups and downs of one of the most difficult physically demanding sports on the planet. Memorizing intense choreography and pairing it with showmanship isn't easy for even the most seasoned performer, so it's always amazing watching non-dancers find their inner Black Swan on ABCs "Dancing With the Stars," and cringe-worthy watching just as many of them fall short.

This season, I'll be joining the panel as TooFab's "Fifth Judge," and since I don't have an audience screaming at me if I'm not nice, I'm probably going to be a little harsher than my colleagues Carrie Ann Inaba, Len Goodman, Julianne Hough and Bruno Tonioli. But I might be nicer, too. We'll just have to wait and see.

For Week Three, the show took its first "trip" to Las Vegas, letting Sin City inspire the dances throughout the evening. And while a few struck jackpot, most of the dancers went home a little worse for wear. And to make matters worse, siblings Julianne and Derek Hough performed a contemporary routine wherein they dealt with the childhood trauma of their parents' divorce. It was achingly beautiful, with staggering choreography and performances that brought literal tears to my eyes (and that rarely happens). On a show that scores from 1 to 10, this one easily ranked Spinal Tap's coveted 11. 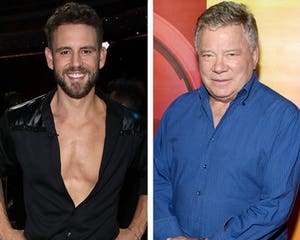 It also set a very high bar for everyone else by showing what dance is supposed to look like and feel like. Virtually no one on the night came close to matching them. In their defense, this was two pros expressing a very personal story, but still, they kind of made everyone else look worse. Just saying.

'The Bachelor' Nick Viall & Peta Murgatroyd kicked off the show with a tango to Lady Gaga's "Poker Face," but Viall should have maybe worked on his a little bit. I could see him counting as the number began, and it didn't get much better as it progressed. His upper body was solid, with a nice frame and steady motion as he moved across the floor, but it was a mess below the waist. He was stiff and heavy throughout, and Peta clearly gave him fairly basic choreography to work with. There was a sequence where he dragged her, and he looked like Frankenstein's monster trying to throw a little girl in the lake. Add to this his smug responses to questions ("I'm just an average schmuck"), and it was not a good look for Nick tonight.

Mr. T & Kym Herjavec tackled a foxtrot to Robbie Williams' "Ain't That a Kick in the Head?" Let me tell you, Mr. T is skating by on his humble charm and his positive attitude, because he is not a dancer. He is stiff and uncoordinated, and seems to have limited movement. This may be a medical thing, but it left Kym doing most of the heavy lifting throughout this performance, as he sashayed around like your grandpa who promised you he'd dance at your wedding even though he through his back out that morning. That said, he was delightful and at least knew what choreography he was given. But it was not enjoyable as a dance performance.

Bull-rider Bonner Bolton & Sharna Burgess tackled a Charleston to Fergie's "A Little Part Never Killed Nobody," and it was a bit too much for him. Bonner did suffer a nasty neck injury that left him temporarily paralyzed, and so he has genuinely limited mobility. So Sharna worked around that. What she couldn't work around was how heavy and slow his footwork was. The Charleston is quick light flicks and little movements, but this was like the Charleston underwater ... and drunk. Not only were his movements weak, Bonner knew it. His body language said this was going terribly, and that actually made it go worse. He looked scared throughout. It was actually uncomfortable to watch.

'Glee' star Heather Morris & Alan Bersten (standing in again for Maksim Chmerkovskiy) danced a tango to Britney Spears' "Toxic." It was familiar territory for Heather, who channeled Britney (bitch) for an episode of 'Glee.' Her character was flawless, which was to be expected, and we know she's a dancer. But her background is more contemporary and jazz than Latin, which showed in the looseness of her carriage here and there throughout the piece. But nitpicking is all I can really do, as she gave the best performance yet on the night. Her chemistry with stand-in Alan was outstanding, as was her carriage and footwork thoughout. It was just the discipline of the dance that was every-so-slightly lacking.

Charo & Keo Motsepe also faced a foxtrot, performing to The Dixie Cups' "Chapel of Love." I'll admit it. I came into this performance expecting to hate it. Charo's schtick is over-the-top and borderline obnoxious (just ask Tom Bergeron). But then the dance started and it was a subdued side of Charo I'd never seen. It wasn't great dancing, but it had moments here and there where she displayed some nice footwork. Her carriage was solid through most of it as well. It's as if reigning in all that energy helped her pour it into a better performance. She was charming and sweet as well, selling the sweet Vegas wedding theme of the piece.

Olympic gymnast Simone Biles & Sasha Farber had to fly through a quickstep to the King's "Viva Las Vegas," and fly they did. This is easily the hardest style to master, and can kill someone's momentum on a show like this. But Simone picked it up quickly, with incredibly impressive and speedy footwork for the third week of the competiton. There were a few partnering moments that were a little weak (mostly releasing and reconnecting hands and arms), but this was easily one of the strongest performances of the night. And Simone's bubbly personality shone through every step, making it a joy to watch. 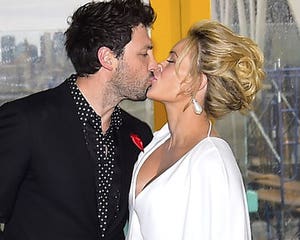 Former Cubs catcher David Ross & Lindsay Arnold went to the "Candy Shop" with 50 Cent for a 'Magic Mike' inspired jazz piece, and let me tell you David sold this piece 100 percent. Another surprise, I didn't expect him to be able to embrace the absurdity of a male-stripper inspired number, but he tackled every element of it with gusto, including stripping down to his sparkly underwear. Lindsay made sure he was the total package on display by having him spend half the dance on a stage with other male performers, and he had every bit of their energy and moves. It was a little sexy and I can see why his teammates immediately started teasing him on social media. But they can't tease the fact it was easily his best performance yet, both playful and technically solid.

"Real Housewives of Beverly Hills" star Erika Jayne & Gleb Savchenko jived to Alen Menken & Genn Slater's "Take Me to Heaven," by which I mean Gleb jived and Erika was there with him. With her long legs and envious curves, Erika looked more like a dancer than she moved like one. While it got better later one, her footwork was an absolute mess in the beginning like she was trying to dance on wine someone had thrown at her or something. Most of her kicks were weak, but again it improved as she got more confident, but the damage was done. And this was with Gleb being very kind to her by taking on almost all of the challenging choreography. She mostly got to sashay around and extend her legs, and even that looked stiff.

NFL running back Rashad Jennings & Emma Slater tried to "Swalla" a samba with Jason Derulo providing the soundtrack. But while Rashad was tied for the highest score last week, that confidence did not carry him to success this week. I respect that Emma challenged him with difficult choreography coughErika Jaynecough and he managed about half of it well. His footwork alternated between on point and a complete mess like he was either losing the count, or forgetting the steps. Points for keeping the right personality throughout, but his carriage was lazy and he needs to spend more time mastering the choreography to get back on top. 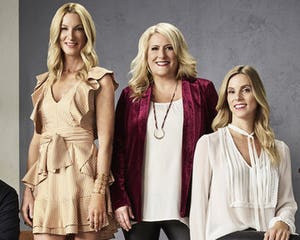 Oklahoma, We Have a Problem! First Look at Bravo's 'Sweet Home' Showdown over the Sippy Cups (Exclusive Video)

Fifth Harmony member Normani Kordei & Valentin Chmerkovskiy showed everyone what a foxtrot is supposed to look like, dancing to Shirley Bassey's "Big Spender." If not for the Hough siblings, this would have taken the night. As it stands, it was easily the strongest contestant performance of the season thus far. It was a challenging piece with quick movements, physicality and strength. Normani showed all of those elements, and I could not for the life of me find anything to nitpick. I think the other judges just like to save their 10s for later in the season. After all, tonight was their first nine. Well, I'm not shy and I call it like I see it. Right now, this is the couple to beat!

After all the dancing was done, Mr. T proved that personality and charm go a long way. Even though he had the worst score by three points last week, he wasn't even in jeopardy. Every season an untalented celebrity rides deep into the season on fan support. It's cute at first, but it becomes frustrating later. For now, Mr. T is cute, so we'll give him a pass. Ask me again in a month if he's still here.

As it was, Nick and Charo deservedly fell to the bottom, and Charo cuchie-cuchied her way out the door. Nick needs to quickly learn that a disarming smile and witty charm aren't enough to make it on this show, or he'll be following behind her very shortly.