Elle King apparently ditched her wedding to boyfriend Fergie that was set for Saturday in New York to fly cross-country to an Eagles of Death Metal concert. The move came amid photos surfacing on the "Ex's and Oh's" singer's social media pages that indicated she was now single.

"Skipped out on my wedding," King said.

"I married Rock & Roll instead, so I hopped on tour with EAGLES OF F--KING DEATH METAL." 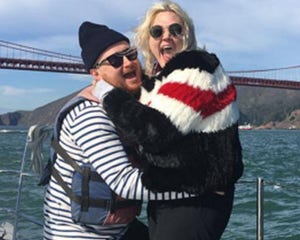 The show was held at the Paramount Theatre in Seattle, Washington, and by all accounts it didn't appear that her boyfriend was in attendance at the concert.

In March, King shared a cryptic photo featuring her and two of her friends and captioned it, "All my single ladies."

A spokesperson for King has yet to return TooFab's request for comment.