Samantha Bee was hoping for a slow summer of news so she could discuss things like skunks with their heads stuck in peanut butter jars, but the consistent “blur of terrorism, hate crime and disasters” are making it rather difficult to have an easy, breezy summer.

The commercial taught viewers that the “unhinged left is endorsing and applauding shooting Republicans” and they're the same ones who are in support of Ossoff. 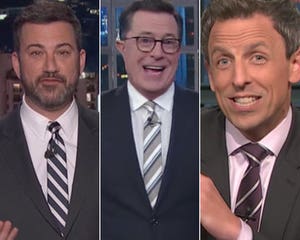 But Bee could no longer sit around and tolerate Republicans “crossing the line” with their aggressive campaigns.

“Oh! That must be why he lost. The 'cheering last week's shooting' demographic is basically zero," she said. “The unhinged left is even less powerful that the hinged left, which is saying a lot.”

Bee then cited everything from Snoop Dogg to Kathy Griffin to Shakespeare in the Park for becoming the Right's “boogeyman these days," but she's buying Republicans' argument that these cultural figures are responsible for inciting violence. 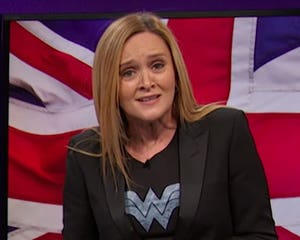 “Shakespeare and Snoop Dogg are not responsible for last week's shooting just like Sarah Palin was not responsible for Gabby Giffords' shooting,” Bee said. “The only violent assaults Palin has ever committed were against moose, grizzly bears, wolves and the English language.”

Bee then continued to show another example of protestors ruining “Julius Caesar” in Shakespeare in the Park.

“That is appalling,” Bee said. “Protesters managed to get tickets for Shakespeare in the Park? If you guys can get me into that treasonous play with black founding fathers who are rude to Mike Pence, give me a call.”

After a deep breath, Bee had one final plea before she wrapped up: “Look, can we all try to be vigilant without being f--king idiots? Guys, it's summer!”