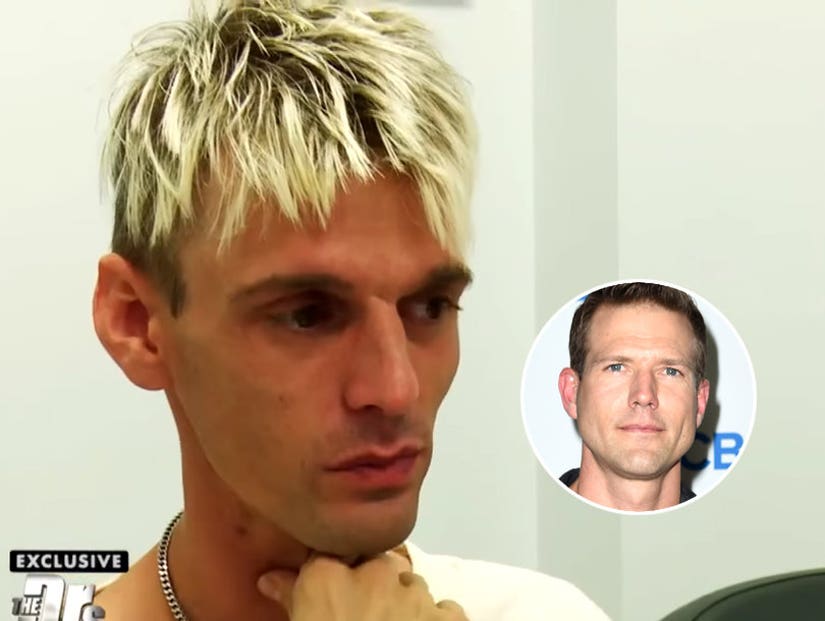 Aaron Carter is coming clean about his emaciated appearance, drug use, social media backlash and his fear of getting sick with cancer or HIV during a 2-part special of "The Doctors" this Wednesday and Thursday.

TooFab spoke to "The Doctors" host Travis Lane Stork just before Wednesday's airing to learn why the 29-year-old pop star decided to seek help, what the doctors did to diagnose his mental and physical illnesses and the advice he has for the many people who are struggling with similar symptoms.

"He can't put weight on and he acknowledges he has a problem with eating. Half the time he's not hungry. Sometimes eating makes him feel sick and there are a few signs of having an eating disorder," Stork told TooFab. "But on top of that, there's a lot of worries about potential mental illness and that's what we always tell people: If you can't put on weight or you're having trouble eating or you're losing weight rapidly, there could be a medical problem so we tested Aaron for everything just looking for any disorders and we also tested what was a big concern for him, which was sexually transmitted diseases including HIV."

Here is what Stork told TooFab about Carter's road to recovery.

TooFab: How did Aaron coming on the show come about?

Aaron finally realized that he needs help and he knew if he came on "The Doctors," this was an opportunity for him to not only share his story, but set the record straight and tell everyone what he's been through. He wanted to tell people how much he's been hurt by the comments of his emaciated appearance. He wanted to set the record straight about what is going on with his health and the drugs he has been taking which he insists are the medications he has been prescribed. So he wanted to have a platform to tell his story, but more important he wanted to get help.

Prior to sitting down with Aaron for the interview, did you follow him on social media and if so, what are your thoughts on some of his habits there?

I did not follow him on social media since I'm not big on social media, but having said that I did pay attention once I knew he was coming on. Look, Aaron is a people pleaser. He wants, much like anyone in the limelight, he wants to be appreciated and loved. I think that's something that is very common, especially when you have been a pop star at such a young age. But I think Aaron and maybe because of his health, is so worried about what other people are saying that he needs time now to focus on the one person that matters and that's him. Social media can be a troublesome thing for anyone when they are trying to focus on just themselves because it can be one mean comment and that can knock you down when you're trying to deal with possible medical issues and I can see the pain in Aaron's eyes regarding some of the negativity about him.

As a doctor, did you see warning signs in any of his behavior that he's suffering or in trouble?

The warning signs are apparent. Aaron is very emotional. He's up and down, he's happy and sad. I think for him getting to the root cause of that, which some of it is his dependence on medicines like Xanax, KPins and such for severe anxiety, and he's also been prescribed Oxycodone which is an opiate, which is a highly addictive medicine and for Aaron whenever he's feeling over stressed, I think his coping mechanism is dependent on the medicines he's on and that happens to a lot of people so I don't fault him for it. But it is a dead end road and when you look at Aaron it doesn't take being a doctor to realize his physical health, not just emotional health is in jeopardy right now.

He said he fears his health could be a result of cancer and or HIV. What brought him to such a conclusion?

He can't put weight on and he acknowledges he has a problem with eating. Half the time he's not hungry. Sometimes eating makes him feel sick and there are a few signs of having an eating disorder. But on top of that, there's a lot of worries about potential mental illness and that's what we always tell people. If you can't put on weight or you're having trouble eating or you're losing weight rapidly, there could be a medical problem so we tested Aaron for everything just looking for any disorders and we also tested what was a big concern for him, which was sexually transmitted diseases including HIV.

As you know Aaron recently came out as bisexual. Do you think any of Aaron's health and/or emotional issues right now are connected with his longtime struggle with sexuality?

Only Aaron knows that for sure, but based upon what he has told me, I don't think so. If anything I think Aaron feels a little bit liberated and even on stage he says, "Look, I find woman attractive and I find men attractive." I don't think that has been the root cause of any of his issues as much as he is finally at a point where he can be an open book that people can read because he is sick of putting forth a certain image and I have to say I think it was pretty brave of him to open up about that. I don't think Aaron himself knows what he wants long term and I think right now he's just working himself through it and we're quite frankly for better or worse, along for the ride and we'll try to figure out what we can do to help along the way.

Did it seem like Aaron was more concerned with his health or the rumors surrounding it?

Aaron also talks about his drug use, but it's a little confusing. He says his doctor is prescribing him pills to relieve stress and pain, but he finds himself getting these meds off the street instead. Does Aaron have a drug problem?

All of the medicines he's taking are prescribed by physicians, but the thing is you can have a drug problem even if every medicine you take is prescription. He's taking these very dangerous drugs that could eventually kill someone and I don't think Aaron understands how dire that situation is because people did from prescription medications every day and I think that's where we were hopefully able to open Aaron's eyes.

Is the combination of drugs that he admits to taking influencing him to have these mental breakdowns?

As the doctor conducting the interview with Aaron and overseeing the tests, what do you hope the viewers of your show take away from these 2 episodes?

Aaron is a good guy, who has been a pop star since he was a young little boy, but he's a human and he's struggling with a lot now due to early fame. The first step is to seek help and the second step is to accept the help and Aaron reached out and asked for help, so now we just have to hope and pray he is going to accept the help long term.

What advice did you give Aaron in the end?

This is your life and no one else's so you have to start focusing on you and not what other people think of you. Fans are still going to be there for him whether he takes a month or two for himself or not so taking time for himself is best for him long term. The key is making him realize now is the time to get help.