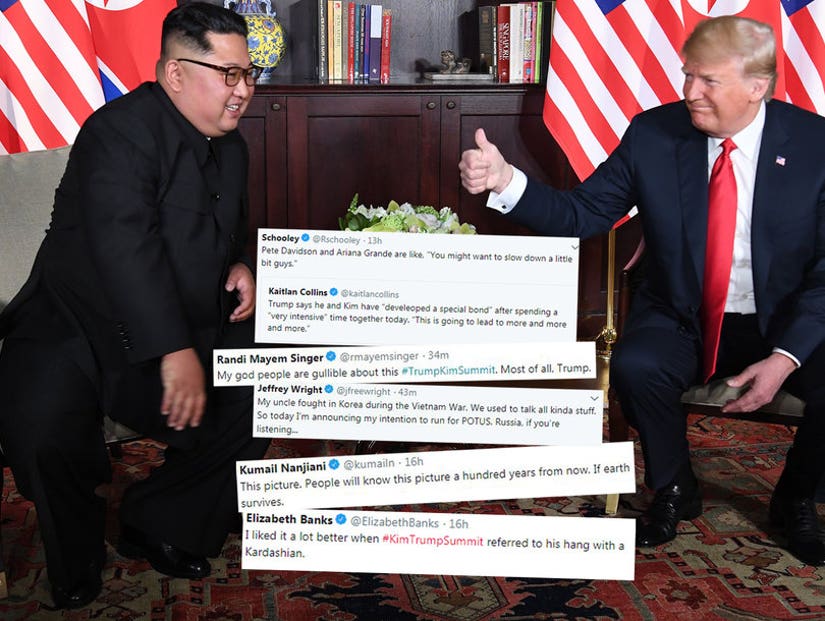 President Donald Trump declared success after a summit with North Korean leader Kim Jong-un on Tuesday afternoon -- but Hollywood's not buying it.

The meeting resulted with Trump and Kim signing a document agreeing to a handful of key provisions.

Overall, the two walked away with an understanding that Pyongyang would work toward denuclearization and that the United States would end joint military exercises with South Korea.

Neither side, however, specified exactly how Pyongyang would be achieving or verifying said denuclearization. 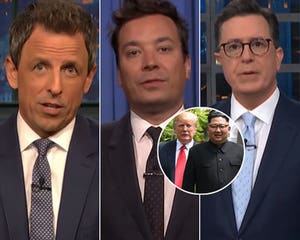 POTUS claimed that the summit went "better than anybody could have expected" and said Jong-un had a great personality. Trump also said he would "absolutely" be inviting Jung-un to the White House. 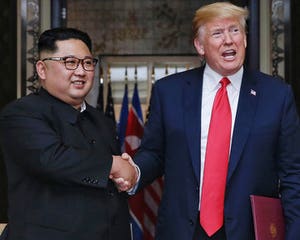 Take a look at how Hollywood responded to the summit in the savage tweets below:

Let's Make A Deal: You'll be a real world leader. I'll sway the midterm elections. And together we will save the world from the bloodthirsty Canadians. pic.twitter.com/kHa1w3ye03

“Those who say it can not be done, should not interrupt those doing it.” -Chinese Proverb

You mean like making enemies with all of our allies and sucking a dictator's ass? We won't interrupt. https://t.co/BNB9EJRg3S

I liked it a lot better when #KimTrumpSummit referred to his hang with a Kardashian.

Will they use condoms? Will he spank Trump with a magazine with his face on it? Will he show Trump how he uses machine guns at executions? https://t.co/53l2uVXmzm

Uh...yeah. Look, if there is a new direction for NK and US, bravo. But more likely, he'll disrespect Kim like he's disrespected every ally and that will be that. And no excuse or apology will suffice. I hope I'm wrong. https://t.co/unEmQftnPS

Sharp enough to know I'm in the drawer, not the draw. https://t.co/kC4aQhJTaH

This picture. People will know this picture a hundred years from now. If earth survives. pic.twitter.com/1YwZ7C0RfP

I'm alone and sad and scared about the world.

Let's be kind to the people around us. That has to be the key right? No matter what you believe, please be kind. Try to love. I promise I will.

I wanna make it clear. I'm ok. Please don't worry about me. Just feeling the way I say I'm feeling.

Which is more disrespectful to the flag, kneeling or displaying it next to the flag of a brutal dictator who oppresses his people and maintains power through murder? Asking for a friend who plays football. pic.twitter.com/NwxMG9Ks0G

The #TrumpKimSummit is just like the @IHOb stunt: one is to sell some burgers, the other to sell Kim Jong Un as a legitimate world leader. And our guy walked right into it. https://t.co/jeYCagPXQY

UPDATE: Two lying authoritarians whose word is worth shit signed a thing. It's the same thing one of them has signed multiple times in the past, and violated, but the other one is so stupid he thinks he's making history. #TrumpKimSummit

Seeing the American flag hung next to that of a despotic, murderous dictator is a bit of a fucking gut punch. #TrumpKimSummit ⬅️ tiny hand emoji is also not helping.

I truly believe Kim had his suit sleeves xtra long to make his arms look longer & trump had his sleeves short to make his hands look bigger I have learned so much about tailoring and fashion pic.twitter.com/dRfWFsdog5

When you're almost done picking teams in gym class. pic.twitter.com/HjblABuKsm

Trump gives renewed meaning to the old adage “If you don't know who the mark is at the table, it's you.” https://t.co/vIX4oXDiKL

The only takeaway is Kim Jong Un moved on the US Presidency like a bitch.

Well, at least it didn't end in two minutes, which it could have (insert own Stormy joke here). Prediction: tomorrow, Trump will "remember" what was said very differently from Kim. But talking is still better than staring.

Right now. James Clapper says Dennis Rodman is an asset to NK talks. Dennis breaks down crying to @ChrisCuomo. Dennis then thanks Chuck Daly and Eddie Vedder. This is 2018.

Bob Schooley, who created the 2002 animated series, "Kim Possible," went on perhaps the funniest rant of the day. See some of his best tweets below:

Look at those two nice and handsome and thin and perfect gents. pic.twitter.com/vPbl62hk2Q

Did Trump learn a greeting in Korean? Like, “We're America, bitch?”

He is so inviting him to Mar-a-Lago. https://t.co/NMyScdmSbr

A little carried away. pic.twitter.com/EIBNseKa1T

Pete Davidson and Ariana Grande are like, "You might want to slow down a little bit guys." https://t.co/wO9pUikLtA

Trump being at his most comfortable around the worst people should be a giant red flag.

Call me, beep me. pic.twitter.com/vkIGVUV4CJ

Why do I feel like Trump's one demand was, "We end with me signing something in a leather folder."

Remember when we thought "Do Not Congratulate" was Trump's worst diplomatic blunder?

Trump is one interview away from saying, "But if you look at how much Hitler loved his dogs..."

WWII could have been avoided if only Germany had better beaches to develop.

Trump should have talked up beachside gulags. Read the room.

And obviously that's a big even if.

I hope if Trump is actually deposed in the Summer Zervos case her attorney has a collection of all the times Trump has bragged about having the best memory in the world.

I'm sure Russia and the NRA share common goals for the US. https://t.co/IiL7r7x2Ww