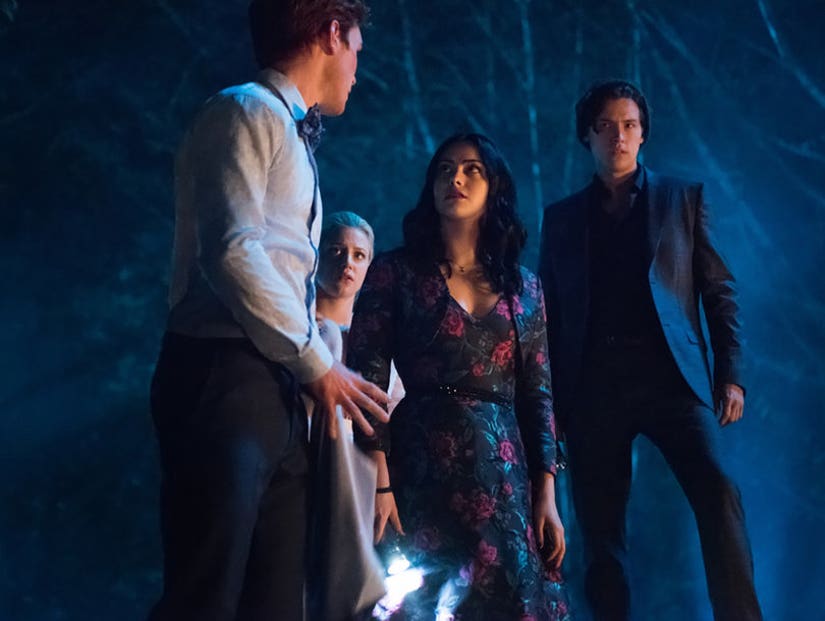 Here's everything we know about which ships could be in trouble and where the show's newest cast member fits in.

Expect some big changes for the town of "Riverdale" when the next season begins in October, as both the cast and showrunner tease a return to basics and the "core four."

The phrase "Core Four" was repeated by almost everyone we spoke with at Comic-Con, in separate interviews with KJ Apa, Lili Reinhart, Cole Sprouse, Camila Mendes, Madelaine Petsch and showunner Roberto Aguirre-Sacasa, who also hinted at the end of The Farm storyline and a strong focus on whatever happened to Jughead that led to the other three covered in blood.

While that mystery remained unsolved, here's what the stars were able to tell us about where we'll find their characters when the show returns in the fall.

For KJ Apa, the opportunity to be out from behind bars and back with his regular costars was a welcome change.

"We're gonna be diving into more of the relationships between the Core Four. The Core Four will be spending a lot more time together, which I think is nice," he told us. "I can finally stop working with prison inmates and boxers and stuff. It's good."

Instead of boxing, Archie will get back to playing football again, which will see him working more "with my best mate Charles Melton." While he said he gets to "keep my shirt on as well," Apa did concede that "there's a lot of shirtless Archie" in the first episode.

Much of his first couple episodes will also deal with the death of Fred Andrews, following the real-life death of Luke Perry. Read more about what Apa said about that storyline, in depth, here. Because of Fred's passing, Veronica will be "a solid rock" for Archie when the season begins -- with Apa saying, "From what I know now, Varchie's going really strong."

With a lot of the season focusing on the college application process and life after high school, Apa noted he doesn't know what's ahead for his character. "Maybe he won't go to college, which I've I've heard whispers of," he said, before adding with a laugh, "Maybe he'll get held back a year."

Aguirre-Sacasa confirmed the first half of the new season will "be building up" to that moment teased in the season finale, with flash-forwards that will "fill in the story." Once the season gets to the night in question, the second half will show "the fallout from that night."

When the season begins, however, viewers will follow Jug as he goes to a brand new prep school. Sprouse noted that the new school won't really affect his relationship with Betty, but will impact things with sister Jelly Bean. He added that the school is "directly tied" to the central mystery.

At his school, he'll join what Sprouse described as "a little Poet's Society," as Jug integrates himself "into a group of very wealthy elite young kids." The actor said Jughead will be more like he was in Season 1, focusing on writing more than leading a gang of Serpents.

He also said he filmed a scene handing over control of the Serpents to Toni, but it was cut, with the intention of possibly stretching that storyline out a bit in Season 4.

Reinhart said Jug heading to a new school will "put some sort of strain" on the Bughead relationship, merely because they won't physically be together or "experience their last year together doing senior year things together." That being said, the actress noted the Betty is Jug's "biggest supporter" and loves the idea of him getting a better education because "she wants the best for him and for the rest of his life, which is sweet."

Betty's big storyline at the beginning of the season will revolve around The Farm and tracking down where they went with her mother, Alice. She'll team up with her long lost brother Charles and the FBI to find them.

"Betty has solved more crimes than the sheriffs in the town. I think she solves every crime, like she really does and she's a bad ass bitch," said Reinhart. "She's using her resources at high school, the kids surrounding her, to help figure out where Alice is. That's her main priority, figuring out where her mom is. Although she feels a bit betrayed by her -- because of the fact that she was hiding this huge thing this whole season -- but she was doing it to protect Betty and that's something that I think Betty can understand."

Aguirre-Sacasa said The Farm storyline will come to a head in the third episode. "I think it brings that story, or at least this chapter of that story, to a close," he teased, "It's like 'Dog Day Afternoon,' it's a huge kind of action movie. So it's really really fun, with Betty trying to get her mom out of out of The Farm once and for all." Reinhart also said the two characters "are right at the heart" of episode, which is "super intense" and provides a "satisfying" end to the story ... for now.

She'll grapple with grief as well after her father's death. "Betty is currently struggling with the fact that her father is gone and the fact that she can't grieve him, because she feels that that would make her a bad person," noted the actress. "How can she grieve someone who was such a monster? And Jughead is really there for her during during that moment of doubt. It's really sweet to see him be there for her like that."

Betty and estranged BFF Kevin will also possibly patch up their relationship, or at least start to, in the second episode. "She's going to get the most as she can out of Kevin and try to possibly repair that relationship," said Lili. "If Kevin truly wants to separate himself from The Farm. Kevin's a lost soul, poor thing, he needs some love. But I think there's definitely hope for that friendship."

As Apa noted, things are pretty solid for Varchie when the season begins, relationship wise. But with that coupling comes the fallout from her split from Reggie last season.

"In episode 2, there's a confrontation between the two of them because Veronica very quickly went back to Archie and Reggie was left with hurt feelings," said Mendes, "that's definitely addressed."

While Hiram is "still scheming from prison" and "making her life very difficult," Ronnie will have a new adversary as well: the school's principal Mr. Honey, played by "Dawson's Creek" alum Kerr Smith.

"[He's] not just going to be trouble for Veronica, but for a lot of characters," said Mendes. "He's taking Weatherbee's place and his goal is to reform Riverdale and he and Veronica have a confrontation in Episode 2, which I think might turn into something, a storyline that could develop into a thing between them."

Mendes also added that Veronica is "definitely taking advantage" of both of her parents' being locked up.

When we last saw Cheryl Blossom, she was chilling with her dead brother's corpse in the basement. When asked how long he'll be down there, Petsch deadpanned, "until he decomposes."

"As of right now we're kind of keeping them in the basement. He's becoming a good listener for her and I think that's going to be obviously quite problematic for her relationship and also for her mental health," she noted. "The longer he's there, the longer that wound is gonna get bigger and bigger."

She added fans "will be seeing a lot of Choni," something which makes Petsch "very happy." While they're "in a good place" when the season begins and she personally believes the two are "endgame," Petsch noted that "Cheryl's keeping a quite large body-sized secret in her basement."

There could be some tension between the two when it comes to college as well, as they're both possibly going to Highsmith after their senior year. "I'm not sure if Toni really wants to go there or what her plan is," added Petsch, "That conversation will have to continue and hopefully they both get in."

Petsch said Cheryl will be teaming up with Veronica for a "business venture," she's going to "go all out" for Halloween and hopefully reconnects with cousin Betty, who could "help her with her mental health." The actress also really wants to see her character finally speak to a therapist. The character will be there for Archie after his father's passing as well -- and she's currently got custody of both of Jason's twins.

The cast and crew also promised we will find out what happened to Cheryl's mother, Penelope Blossom and Mad Dog's real name. As for which musical they'll perform, that's still up in the air.

"Riverdale" returns October 9 on The CW.