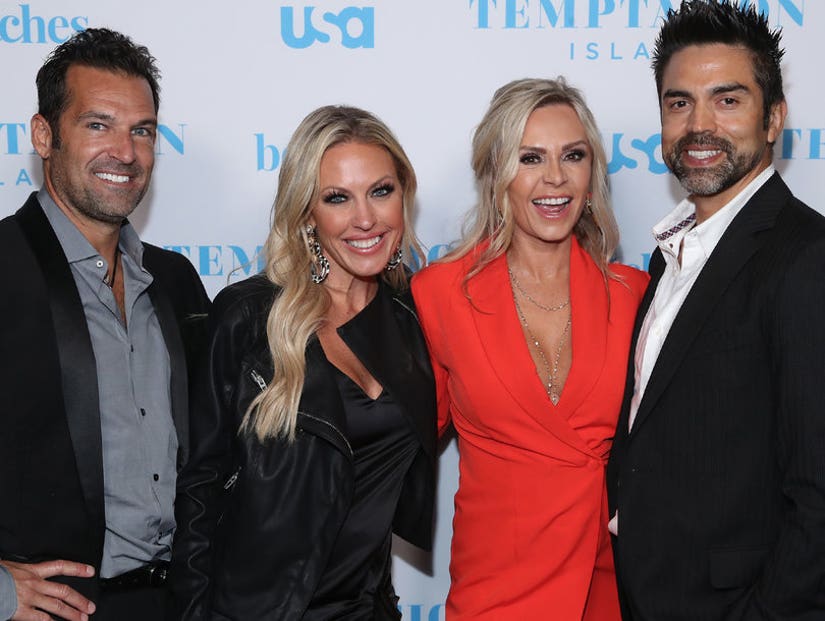 "Then Tamra's like, 'Oh, no, Ed and I do that, too!'" Braunwyn told her husband, whose eyes nearly came out of his head.

According to Braunwyn, they only ever do it with a woman they somewhat know, and it's always on one of Sean's "monumental birthdays." She also said they keep it to mostly girl-on-girl stuff. 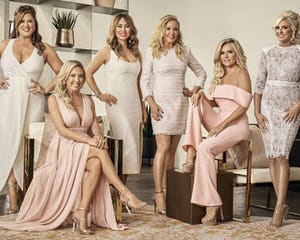 "Then Tamra's like, 'Oh, no, Ed and I do that, too!'" Braunwyn blurted out. Sean's eyes nearly came out of his head, as did ours. Did Tamra really say that?! Braunwyn followed up the shocking remark by excitedly asking her husband if he had spoken to Eddie Judge. He said he hadn't.

"I haven't actually thought about it for a while because we've been having so many babies, but that actually sounds super fun!" she noted, after they both agreed Tamra was "very pretty." 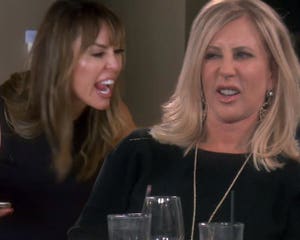 In Gina Kirschenheiter news: Emily Simpson had set her up to go on a date with her husband Shane's cousin, but he canceled last minute because of an "injury." When Emily called him up and put him on speakerphone, he explained he had broken his toe. "A toe? I got stood up for a toe?!" Gina exclaimed.

In the same breath, though not to the guy whose toe had stood her up, Gina revealed that her estranged husband, Matt, was "trying to get back in my pants" but that she wasn't having it. She later went to dinner with Emily and Shane, where she got a text from Matt.

Staring at her phone, Gina seemed upset, then passed it over to Emily to read. "It's rude," Gina noted, hoping Emily would agree. She did. So did Shane.

"Matt's text basically calls her out because she's not at Nick's baseball game, she's out to dinner," Emily told the camera, while Gina said in her own confessional, "I am the person who does their homework with them. I am the person who listens to them cry. And then I do one thing for myself, and I feel annihilated for it. It's not fair."

Gina told Emily and Shane she felt she had bruised Matt's ego by not accepting his advances, causing him to flip the switch.

The plot thickened when Gina later revealed to Tamra that she had received a text from the guy who stood her up, saying he had a girlfriend. He told Gina, "Emily and Shane knew that, and they said it would be fine," but Emily vehemently denied knowing he wasn't single. Gina felt betrayed and humiliated and refused to answer Emily's six calls and 10 texts.

"Did she set me up to just hurt me? I have no idea what's going on," Gina told Tamra. "I'm not even picking up because I don't wanna hear her excuse her way out of this. It makes me question a lot." 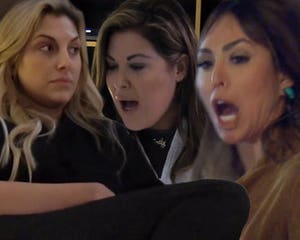 Later, Emily weighed herself for the first time in "eight or nine months." She told Tamra and Eddie that her arthritis in her knees and hips had been acting up, so Tamra point-blank asked if it was because she had gained weight. Emily said yes, adding that her diet had become "ridiculous." Breakfast is coffee with cream and sugar. Lunch is "maybe" something like Del Taco. "I'm not a one-taco kind of girl," she confessed. Eventually, Eddie convinced Emily to step on the scale. She weighed in at 191 lbs and wanted to die.

Eddie informed her that her total fat was 65 lbs, 34 percent, and that she was considered obese. He urged her to focus on changing her nutrition.

Poor Emily sobbed in a later confessional, saying, "I've been in this complete land of denial that I kind of like living in. It works for me. If I don't know, then I don't have to address it, then I don't have to do anything about it. I can just be like, 'Yeah, I gained some weight but not sure how much.' I'm upset at myself for letting it get to this point. I have three little children. All they wanna do is ride bikes and go to the park, and I cannot keep up with them." 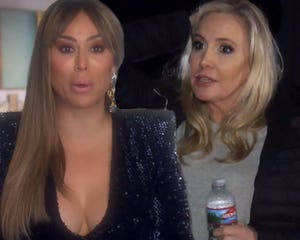 Later, Shannon Beador got an O-Shot, which is basically like a face lift for the vagina. By extracting platelets from the blood and injecting them into the area near the clitoris, the procedure can improve sex drive and intensify orgasm. Good for you, Shannon!

In other news, while Tamra was telling Vicki Gunvalson about Shannon's upcoming birthday party (which will take place on a train -- yes, jokes were made), she let her know former "RHOC" star Meghan King Edmonds was invited, which didn't sit well with Vicki. However, when Vicki stepped away, her boyfriend, Steve, told Tamra he was "already planning my proposal. I already have the ring. Everything's set to go." Vicki suspected something was in the works, but she didn't know when it would happen. 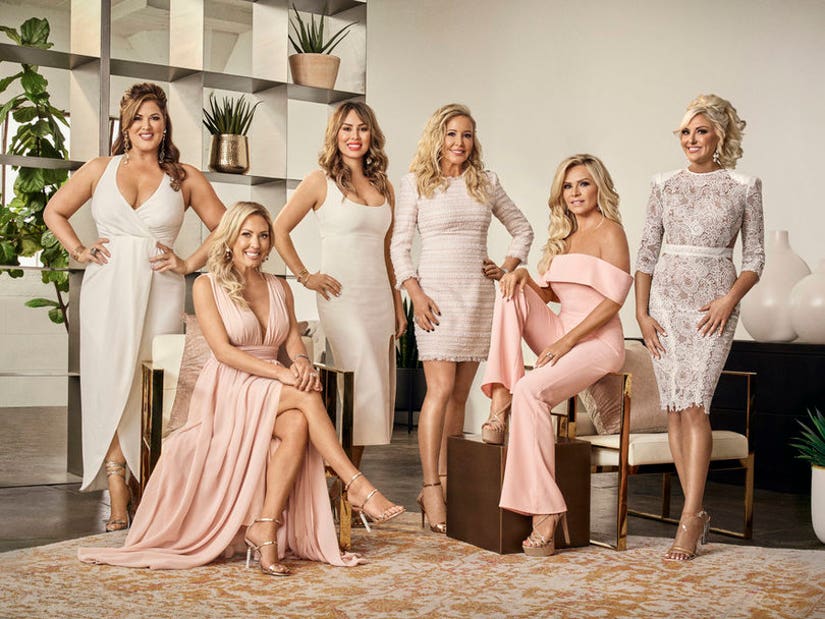