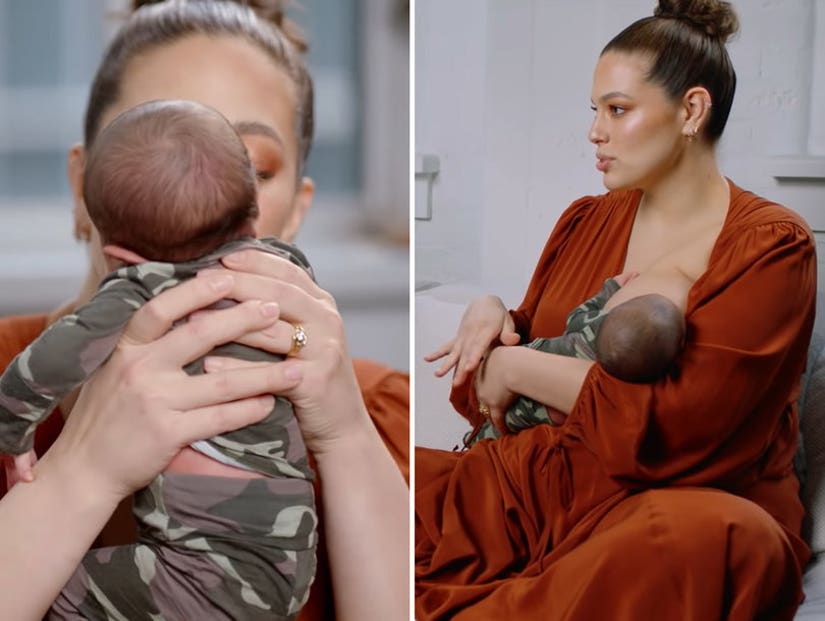 "At home. Right there. In a big ol' pool," Graham said of her birthing experience.

Ashley Graham is introducing her newborn son to the world in a big way.

On Tuesday's episode of the model's "Pretty Big Deal" podcast, Graham and her husband, Justin Ervin, gave everyone a first glimpse of their new baby and revealed his extra special name: Isaac Menelik Giovanni Ervin! 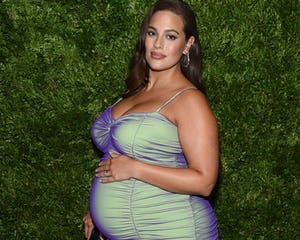 Ervin, a filmmaker, began by explaining how he's had the name Isaac picked out since middle school. "My sister Kia and I would have discussions about, 'Oh, one day, when we have kids...'" Ervin said. "I brainstormed my own name for my future son, and I knew it was gonna be Isaac even from then until now."

Graham, who gave birth last month, recalled how she and Ervin chose Menelik after being "inspired" on a trip to Ethiopia. Menelik, which means "son of the wise," is also the name of the country's first emperor.

"So, everything in his name is pointing to legacy. Whether it's, you know, Isaac with Abraham, Isaac and Jacob. Menelik, you know, the royal African roots," Ervin said, noting that Giovanni is a nod to both his and Graham's grandfathers and the church his family worshipped in.

Graham also opened up about her natural, home birth. "Now, I have to say now though that I gave birth and I did it naturally and I felt everything, I feel like there's nothing I can't do," she shared. "Like, there's nothing that could come my way where I say, 'Oh, that's too hard I can't handle that.' I went through laboring for six hours, naturally."

"At home. Right there. In a big ol' pool," she continued and then joked, "Don't worry, it wasn't on the carpet."

The television personality expressed her reasons behind opting for a home birth instead of a hospital. "If I would have had the birth at a hospital, I think my anxiety would have been through the roof," Graham told her husband. "But because I was here, the lights were dim, it was a chill environment, I got to eat whatever food I wanted to, I got to be in bed, I could be in the pool."

"To go straight from the pool to the bed with our son and just hold him, what a bond," Ervin said.

Graham then emotionally recalled the moment baby Isaac came into the world. "And seeing you with tears in your eyes saying, 'I can see his head,' gave me so much strength to just push him out and I really needed that," she said to Ervin, holding back tears. "Literally, a moment later, we sat back. He was on my chest and he was looking you in the eyes...And I said to you, 'We're a family forever now.'"

Graham took to Instagram Tuesday to talk about the latest episode of "Pretty Big Deal." Captioning a clip from the podcast, she wrote, "I couldn't hold back my tears on today's @prettybigdealpod episode. Nothing prepares you for just how magical and intense giving birth is."

"I'm so grateful that I was able to deliver naturally in my home with my husband by my side for all 6 hours of labor," she added. "Holding my baby for the first time is a moment I'll never forget. Such a special moment in my life deserved a BIG announcement!"

The Revlon model teased the episode on Monday night, sharing black-and-white images of Issac's tiny hands. "At 6:00PM on 01/18/2020, we welcomed 7lbs 5oz of love into our world," she captioned the sweet pics, above. "Meeting our son has made our hearts incredibly full and we can't wait to introduce him to you on @prettybigdealpod tomorrow..."

Graham and Ervin, who have been married for nine years, announced their son's arrival on Instagram last month. "At 6:00pm on Saturday our lives changed for the better," she wrote in a note. "thank you for all your love and support during this incredible time," she added, along with the child's birthday.