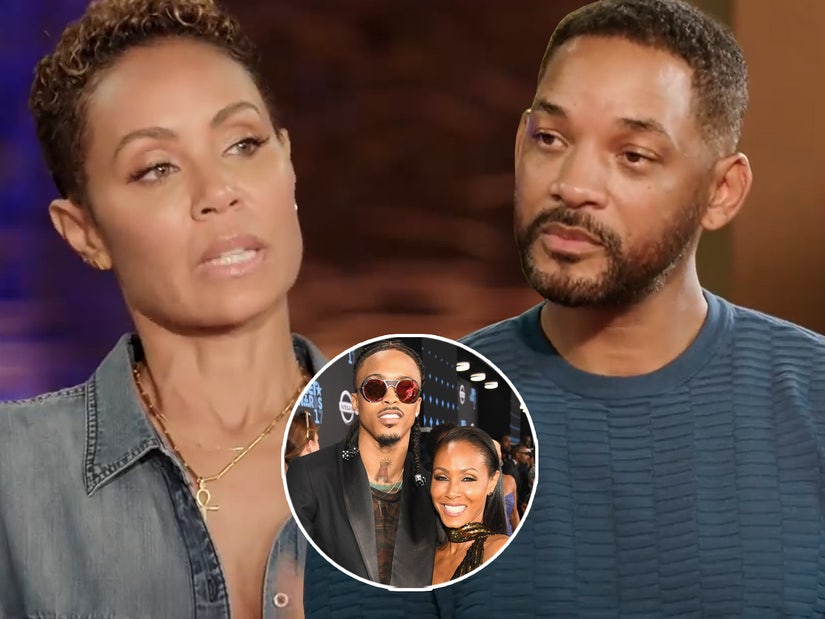 Jada brought herself to the Red Table to share her side of the story, as Will asks the pressing questions.

Celebrities have started to weigh in on Jada and Will's intense episode of "Red Table Talk."

On Friday night, rappers 50 Cent and Meek Mill shared their thoughts on social media, with the former posting a screenshot from what appeared to be an Instagram DM conversation with Will.

According to the screengrab, above, 50 messaged Will and asked, "Yo Will you alright over there?" to which the actor replied, 'Yes I'm cool, I appreciate your concern brother."

When 50 asked Will why Jada revealed her indiscretion on "RTT," Will appeared to respond with, "We broke up so she did her and I did me." 50 then replied, "Then [Jada] said only SHE can give permission for somebody to blow her back out."

Jada being a woman and being real about her actions was refreshing to see a woman do in that type of situation!

Meanwhile, fellow rapper Meek took to Twitter to express his views on the "RTT" episode.

"Entanglement...." he wrote in a tweet, referring to Jada's term for her relationship with August.

In another post, Meek added, "Jada being a woman and being real about her actions was refreshing to see a woman do in that type of situation!"

Jada Pinkett Smith just gave a lengthy response to recent claims from family friend and musician August Alsina, who previously said Will Smith gave him "his blessing" to pursue a relationship with his wife.

Appearing on her own Facebook Watch series "Red Table Talk," Smith directly addressed Alsina's interview with The Breakfast Club's Angela Lee -- in which he said something blossomed between the two after he met the Smith family in 2015.

During the episode, done alongside Will, she admitted she and August had a relationship during a separation from her husband. The conversation quickly started trending on Twitter -- see the best reactions after the full breakdown below.

While a rep for Jada previously said his allegations were "absolutely not true," she clarified Friday that it wasn't a statement she made herself. Will echoed her sentiments, saying he never released a personal statement either.

"At the end of the day, I don't like how all of this came to be. That doesn't matter, it's all love, honestly," said Jada. "That would be something I wouldn't comment on at all. I feel like it's a situation I consider private."

"But now Black Twitter has claimed it as they business," said Will with a laugh.

Talking about their "personal journey" that "became very public," Jada said that about 4 and a half years ago, she started a "friendship" with August and they became "really, really good friends."

Jada admitted she and Will were going through a rough patch, with Will saying, "I was done with you." During a separation, they agreed they would try and find a way to be happy without each other.

"From there, as time went on, I got into a different kind of entanglement with August," said Jada. When it came to Will giving "permission," Jada said "the only person who could give permission in that particular circumstance is myself."

"What August was trying to communicate ... I think he wanted to make it clear he's not a home wrecker," she added.

Ever the dutiful host, Will then asked Jada to say "clearly what happened" between her and August.

"I got into an entanglement with August," she said, as he pushed for more details. "A relationship, it was a relationship, absolutely. I was in a lot of pain, I was broken and in the process of that relationship I definitely realized that you can't find happiness outside of yourself. And luckily enough, you and I were also going through a process of healing in a much different manner."

"It had been so long since I felt good," said Jada, adding that it was also a "joy to help heal somebody," referring to Alsina.

Will joked that, being at the Table, he felt like a husband at "the press conference" while she told "the world about her transgressions." Jada, however, said she doesn't look at it as a transgression "at all," as the relationship taught her about her own emotional insecurity, "and I was really able to do some really deep healing."

Jada said August decided to "break all communication" with her as she "started to realize certain things" about her and Will -- "which was totally understandable," she added. While it's unclear when this happened, Alsina was a guest on "Red Table Talk" in 2018.

"I let that be and hadn't talked to him since," said Jada, "so it is a little weird all this stuff is coming out now since this was several [years ago]." Added Will, "Our experiences of working through it, fighting through it, talking through it and therapizing through it, I think the why now is weird."

"Aug and I haven't talked in so long, so this all seemed very strange," she added.

The two Smiths also said they've never had secrets between them.

"We have really got to that new place of unconditional love," said Jada, as he said he wasn't sure they would ever speak again after their separation. "It ain't for the weak at heart," he added, "there are just certain things we have to go through."

"You gotta go through some shit to get the answers," said Jada. "I definitely believe you and I, we never thought we would make it back."

After noting they've been together for 25 years, they both joked, "We ride together, we die together, Bad Marriage for life."

The episode quickly took over the top trends on Twitter, as viewers reacted with some pretty choice memes, reaction GIFs and expressed both shock and praise for Jada coming clean.

Here's what people are saying on social media:

I’m watching “Jada Brings Herself to the Red Table Talk” & I cant help but notice that Will looks like he is about to cry right from the jump... #redtabletalk pic.twitter.com/UecMa8zPrK

Jada aint even hiding shit whew chile if this aint the energy we need in 2020 #RedTableTalk pic.twitter.com/AU0EEHVu9S

Jada told Will to his face it had been a long time since she had felt “good” #RedTableTalk pic.twitter.com/EyPEzmgxDS

Wait #RedTableTalk is happening now? I thought it was coming on in AUGUST 😭 pic.twitter.com/n1DviBPcCY

"We ride together. We die together. Bad marriage for life." #redtabletalk pic.twitter.com/HUTBZ4KaIp

Shout out to Will for pushing Jada to admit she was "in a relationship" with August. She kept trying to call it "an entanglement" and he was basically like, stop bullshitting Jada, "an entanglement??" #RedTableTalk pic.twitter.com/2SptFmZVBi

JADA AND WILL DROPPED THE NEW RED TABLE TALK.

EVERYBODY TUNE IN 😭😭😭 stop everything! pic.twitter.com/SaB1tg4iuw

“I got into an entanglement” girl nobody on this goddamn planet knows how to say something without saying anything like Jada Pinkett Smith pic.twitter.com/WnlNCRXQyN

Jada admitted to messing around with August and Will just sitting there looking like this: pic.twitter.com/ZcrxtqnDBB

Girls on twitter deleting their “ I want that jada & will love “ tweets after seeing the red table talk episode pic.twitter.com/O40ddET9Gr

Jada & Will at the end thinking they ate that pic.twitter.com/mhUxVTf1Hc

“We Ride Together. We Die Together. Bad Marriage For Life”. —- Will & Jada. Will & Jada didn’t owe any of us a damn thing on info regarding their marriage and other relationships. But here them talk about it was refreshing.

#redtabletalk
Will Smith : I’ma get you back

Will Smith : Again, I’ma do it Again pic.twitter.com/L3xNqqTqM3

Sooooo as I sit here reviewing the latest episode of the #RedTableTalk with both Will and Jada, I just can’t help but think of how entitled we are when it comes to public figures personal lives. In no way shape or form are they required to provide us in explanation...

Let this #redtabletalk be a lesson: A separation is NOT a divorce. Don’t be part of these married people’s games. Will and Jada laughing, slapping 5 and August had his heart broken. pic.twitter.com/gytzZagaAS

Let it be. We can all move on now. Jada ain’t leaving, Will ain’t leaving and if you a side piece don’t catch feelings for neither one of them because you just going to be the clown in all of this. #redtabletalk pic.twitter.com/8rVdugGxc7