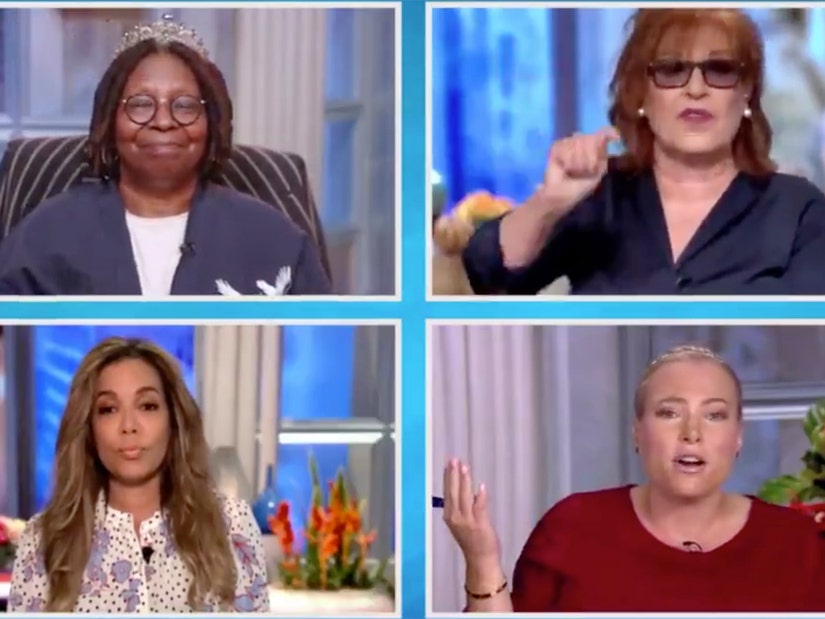 Joy Behar and Meghan McCain got into it on "The View" this morning, prompting Whoopi Goldberg to intervene not once, but two separate times.

It was the first day back for the morning show after a mini-break and tensions flared as the women spoke about the lack of federal response to the coronavirus pandemic from the government.

The show began with Whoopi, Joy, Meghan and Sunny Hostin addressing Education Secretary Betsy DeVos urging for the reopening of schools in the fall as COVID-19 cases continue to rise across the country.

BETSY DEVOS SAYS KIDS MUST GET BACK TO SCHOOL: Education Secretary Betsy DeVos urged schools to reopen in September despite rising coronavirus cases across the country – the co-hosts discuss if it’s safe for children to return to the classroom. https://t.co/e4O1tWIGcT pic.twitter.com/6hIA0KdbAv

Hostin spoke first, saying she's not comfortable sending her own daughter without a federal plan in place -- and adding that she doesn't believe the pandemic has been handled by the government "in the way that we should have and it's just not safe for our children and just not safe for the country."

While Meghan is a proponent for schools reopening -- saying it's necessary for single parents to get back to work without worrying about childcare and important children don't regress -- she said DeVos needs "major media training."

"I don't know if I've ever seen someone at that level be worse in interviews," she said, as Behar began laughing. "You're laughing Joy, but it's quite serious. I was horrified when I saw it yesterday."

"I think we have to have a plan and I'm really disappointed and quite frankly disgusted that 5+ months in, there's just no plan," she continued. "Apparently, if you're a working, single mom with four kids, you're screwed and that is not acceptable in the United States of America today."

"What's funny Meghan is that media training is the least of her problems, that's what made me laugh,"said Joy when she got the floor. When McCain said she was criticizing DeVos' communication skills -- or lack thereof -- Joy added, "I know, she sucks." Everyone started chuckling. 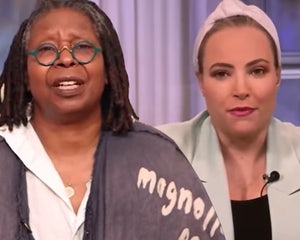 The conversation took a more heated tone, however, when Behar explained what was "amusing me today."

"This idea that the Republican party cares about education," she explained. "They've been spending the last few decades defunding education and they think we're going to believe this baloney they're throwing at us now that they care about our children? Give me a break. Donald Trump only cares about getting reelected, full stop. That's all he cares about."

Meghan hit back, saying she didn't think it was "fair to say Republicans don't care about children. I think that's very aggressive and incendiary."

When Joy clarified that she said "education" and not "children," McCain didn't back down. "To sit here and say Republicans don't care about education or children is just ridiculous," she told Joy.

"Why do they keep defunding it? Every time I turn around it's less money," said Behar. "I was a teacher, I know what I'm talking about, okay Meghan?"

McCain replied by saying the continued hits against the Republican party on the show were getting "exhausting."

"I think what's exhausting is coming on this show every day and being told that Republicans don't care about anything, we just want people to die, we want children not to be educated, nothing matters," she said. "This is a crisis in this country right now. We all have to collectively come together and stop coming into this show every Monday after a break saying, 'Oh it's Republicans' fault.' It's not, this is America's problem."

She did, however, admit there was "a lot of blame" to be placed on  Trump.

"I wish that Hillary Clinton were president, you'd not find yourself in this predicament," Behar interjected, sparking another back and forth between her and McCain.

Whoopi quickly interrupted and threw to a commercial. Tensions flared again after the break, however, when Behar tried clarifying her earlier remarks during a discussion about the White House's recent attempts to discredit Dr. Fauci's warnings about the growing pandemic.

When she started saying something about her cohosts "being accusatory" about Republicans, Behar interrupted, saying, "You have idiots ..."

Whoopi then interrupted Behar, warning them both, "I swear to God if you don't stop I'm going to take us to break again. Okay?"

Meghan replied by saying she didn't even bring up the subject. "We were moving onto another topic," she told Goldberg, "Joy brought it up." Whoopi then got the conversation back on track, asking the women about "the subject we are actually talking about."

While McCain warned against rallying behind just one person in the case of Fauci, she also criticized the lack of federal leadership and slammed Trump for stoking the mistrust of both the media and doctors by retweeting a Chuck Woolery post saying "the CDC, Media, Democrats, our Doctors" were all liars.

After the episode ended, both McCain and Behar reacted to making the show trend on Twitter.

"The View" airs daily on ABC.