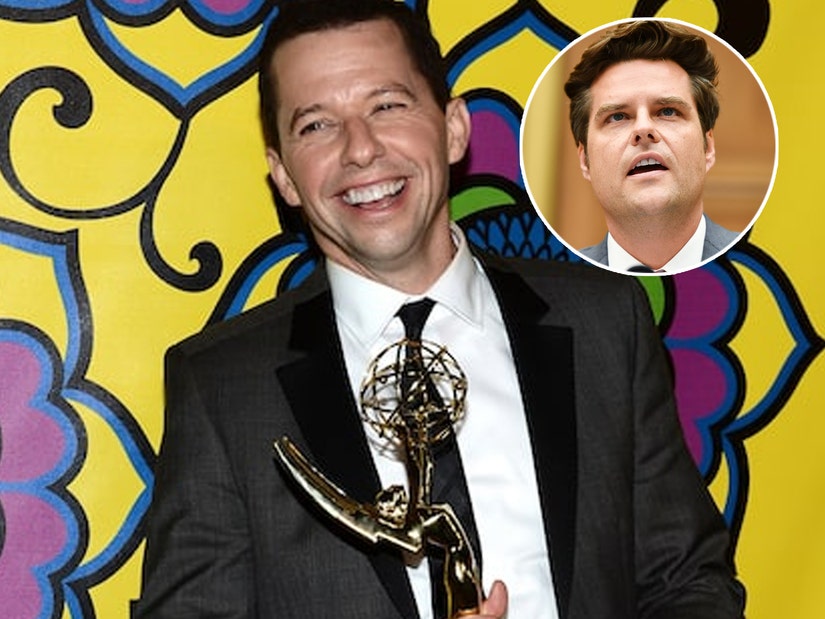 It all started with an attempted "Two And A Half Men" burn...

They're not done yet!

Gaetz fired back at Cryer on Monday, scoffing at his Emmy as "an award Hollywood gives itself."

"I win elections," the Congressman boasted.

An award Hollywood gives itself?

But the actor wasn't convinced.

"Your district is heavily republican, but you're dumb enough to amplify a tweet with a donation link to your opponent," Cryer retorted.

"So it's gonna be a horse race," he added, once again posting the Ehr fundraiser link, to see if Gaetz was "dumb enough to do it again."

We’ll see about that.

Your district is heavily republican, but you’re dumb enough to amplify a tweet with a donation link to your opponent.

So it’s gonna be a horse race. https://t.co/Zq1PrWFIeP

Let’s see if you’re dumb enough to do it again. https://t.co/wAVK0CR0nt

It's 2020 and "Two and a Half Men" is one of the top trending topics in the United States. At this point, that totally tracks.

But it's not a revival of the long-running CBS sitcom, nor has Charlie Sheen done anything. Instead, spiked interest in the show is the fallout of an unexpected and unlikely feud between Representative Matt Gaetz of Florida and Jon Cryer.

Fans were eating it up as Gaetz quickly learned that you don't try to match wits with a comedian unless you have prepared, prepared, and prepared some more. Gaetz didn't prepare.

The politician took issue -- understandably -- with Cryer posting a scathing indictment of some of his actions while in office in a blatant endorsement of his opponent Phil Ehr in the upcoming election.

Rep. @mattgaetz invited a white supremacist to the State of the Union, attempted to intimidate a federal witness, and endorsed a sociopathic bigot who applauded the deaths of migrants for congress.

And Cryer brought the receipts, following up his initial post with a series of posts backing each of his claims. In other words, he did his homework before attacking his opponent.

Gaetz on the other hand, simply lashed out, tweeting, "Charlie Sheen carried two and a half men[sic]."

While Sheen was the de facto star of the series for the majority of its run, Cryer nevertheless had an incredible comeback locked and loaded. One Gaetz could have easily anticipated with a little homework himself.

Is that why, after he left, it lasted for 4 more years and I won an Emmy for Best Actor in a Comedy? https://t.co/VTE6g2yjZp

While Sheen was the face of "Two and a Half Men" for its first eight seasons, the show transitioned into a post-Sheen world surprisingly well, with Ashton Kutcher joining in a new role and Cryer carrying on as Alan Harper.

In fact, ratings went notably up for the first two seasons following Sheen's departure as fans sampled the new dynamic and it remained a solid ratings performer throughout its 12-season run.

Cryer actually scored his second Emmy for Outstanding Supporting Actor in a Comedy Series for his performance after Sheen's departure. His first came in 2009, followed by another in 2012. Sheen was nominated four times as Lead Actor but failed to carry home Emmy gold.

Ironically, Kathy Bates did win an Emmy for her work as the ghost of Sheen's character the same year Cryer picked up his second trophy. The show would go on to pick up a total of three Emmys that year, it's largest haul in series history.

Fans were eating it all up, laughing all the way to Twitter's trending topics, with many piling on Gaetz for his own past indiscretions and for invoking Sheen's name, considering Sheen's own politics:

Charlie Sheen, you have just been schooled by DUCKIE! One of the best actors and comedians of our era. pic.twitter.com/kpS04aAZHD

Charlie HATES Trump/MAGA, as evidenced by a much told story where Sheen outed Trump for once gifting him with FAKE "diamond" Cufflinkspic.twitter.com/e7ynyIHJcJ

In October of 2008, deputies in Okaloosa County, FL literally had to carry @mattgaetz to the drunk tank. I don’t recall Jon Cryer getting ever getting a DUI. Which is amazing considering he worked with Charlie Sheen for years. https://t.co/WSmiGznYtI

I love how you totally don't address the legitimate tweet in question and instead result in addressing something as trivial as Two and a half men and insinuating Charlie Sheen was the star of that show. https://t.co/WjsLBC6h3Y

Charlie Sheen didn’t carry Two and a Half Men- but I hear it takes two and a half men to carry Matt Gaetz after a night out.

Right now Rep. Matt Gaetz is trashing Jon Cryer while defending Charlie Sheen instead standing up for American service members. I'm not even remotely exaggerating. He has time to defend Sheen, but not the troops.