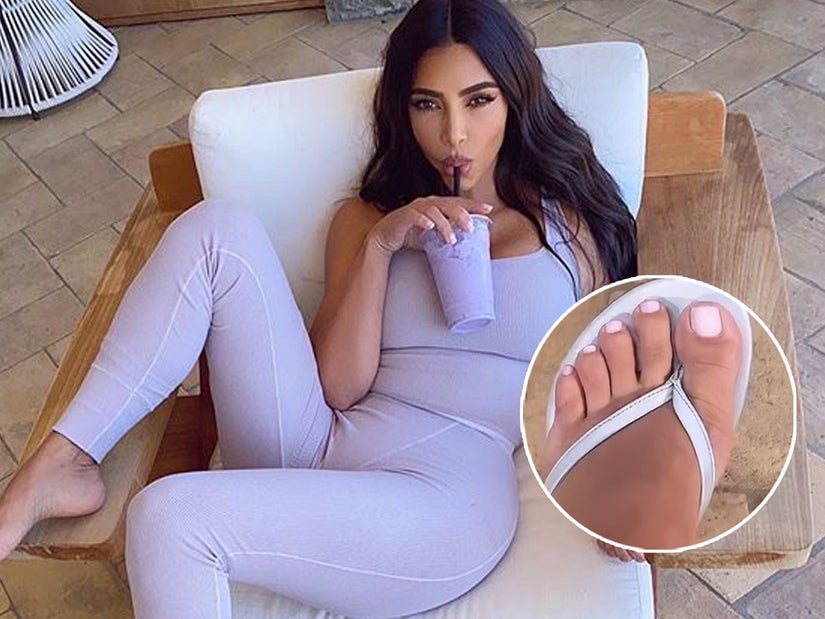 "I hope that answers my six toe question because I only have five toes on each foot."

Kim Kardashian is putting a fan conspiracy theory to rest once and for all.

On Wednesday, the "Keeping Up With the Kardashians" star took to social media to address the rumors that she has six toes. Kim, 39, shared clips on her Instagram Stories as evidence.

"Okay so everyone thinks that I have six toes, and it's really wild," the reality star said as she showed her left foot in a sandal.

Kim then counted her five toes, before revealing why it often looks like she has six.

"But it's this part of my foot that when I wear a shoe just like this it like smashes down right here," she explained, pointing out a small bump on the left side of her foot. "And in a picture -- I don't know why -- that looks like a sixth toe."

In another video, the SKIMS founder laughed as she concluded, "I hope that answers my six toe question because I only have five toes on each foot."

While Kim set the record straight, her friends sang about toes in the background -- and the voices sounded very familiar to her sisters Kourtney and Khloe.

This isn't the first time a member of the Kardashian-Jenner family has addressed speculation about their feet.

Back in March, Kim's young sister, Kylie Jenner, posted a "weird ass video" to tell her followers to leave her "cute ass feet" alone. After the Kylie Cosmetics founder shared a bikini photoshoot on her Instagram at the time, critics took to the comments section to point out that Kylie has a short toe.

The toe in question is the middle toe of Kylie's right foot, which is noticeably shorter than the ones around it. The reality star appeared to notice the response from critics as she explained why the particular toe is different than the others.

"Everyone wants to come for my f--king toes," she said in a video focused on her feet. Declaring that she has "cute ass feet," regardless of what anyone thinks, the beauty mogul proceeded to explain that she had broken the offending toe back in middle school.

"There's nothing you can do about a broken toe, so it just had to heal how it wanted to heal," she explained. "So when I flex this up, this little guy is just out of place." With that, she did just that, showing that even though the toe lines up perfectly fine when her feet are flat on the ground, that simple movement creates the effect in the photograph.

During the filming of this important PSA, Kylie acknowledged what we were all thinking, by saying, "This is a weird-ass video." And yet, thanks to hear relentless followers, it was one she felt important enough to post to maybe, hopefully, doubtfully put this very silly issue to rest.